Why Stephen Harper is no Economist 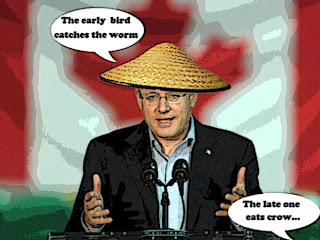 Oh well. At least now we know why Stephen Harper is in such a hurry to sell us out to foreign interests eh?

It turns out it's because he took the slow boat to China.

A confidential government document obtained by CBC News warns the Harper government has been slow to open new markets in Asia, leaving Canada firmly tied to the troubled U.S. economy for a long time to come.

But that was then.

And this is now.

Six years later, almost every aspect of the Harper government's international plan casts foreign policy as a tool to give Canada either direct economic benefit or access to China and other emerging markets.

Now with the help of the new Con Ministry of Foreign Affairs Cheap Deals, he'll sell us out to anybody. And I mean ANYBODY.

"To succeed we will need to pursue political relationships in tandem with economic interests even where political interests or values may not align."

But if you think he's embarrassed by being exposed as a shameless pimp who doesn't know what he's doing, forget it eh?

For there he was today, posing as an  economist.

Lecturing the Americans on how to run THEIR economy. And making an absolute fool out of himself again.

Harper said critics who opposed the North American Free Trade Agreement 25 years ago "predicted the disappearance of Canada as a nation" and "took a credibility hit" as a result.

For in fact those critics were right. NAFTA was the beginning of the end of the Canada we knew and loved.

The effects of this are now well-known. Free trade with the U.S. and Mexico sandbagged much of Canada’s manufacturing base. Trade with China sandbagged the rest. Investment protection deals such as NAFTA and the new Canada-China pact have weakened government’s ability to regulate. All of this has decimated unions, allowing bosses to pay their workers less and themselves more.

And the reason Harper is selling us out to foreign interests, and bringing in more and more foreign workers, is so he can drive wages down even more, cut benefits and pensions, and make the rich even richer.

They'll call him a control freak, a sinister authoritarian, or just a shabby pimp who sold out his own people.

But never in a thousand years will they ever call him an ECONOMIST...

One day historians will describe him as a not especially bright sociopath.

Well isn't Canada being divided, between Communist China and the U.S?

Harper is giving China the bulk of the tar sands. China will also take all of the jobs. Harper said. China can build the Enbridge pipeline, very quickly, very cheaply with their cheap labor. China gets all of the refining jobs of the oil, in their own country. China is bringing swarms of their own people, to work BC mines. If any of the seven new mines going into Northern BC, are Chinese owned, they are bringing their own, to work those too. Gordon Campbell signed a deal with Communist China, they get the mining jobs. Campbell also shipped BC mills to China, along with our raw timber. Putting over a thousand BC mill people out of jobs.

There is nothing in Canada, for Canadians. People just don't get it. Provinces that really do want to survive?? Have to get the hell out of, dictator Harper's Canada. Every day, there is bitching and beefing, about Canada being sold out to Communist China and the U.S. That's exactly what IS going on. Canadians don't even own, our own g.d. jobs. However, let us stay dumb s..ts and, sleep through this too.