Mitt Romney and the Zombie Apocalypse 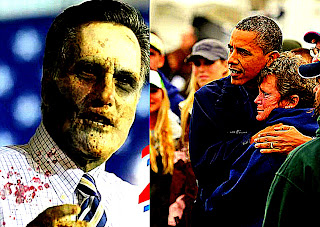 It's hard not to see what's happening in the United States as anything less than a slow-motion horror show.

A nation reeling from the catastrophe of Hurricane Sandy.

A presidential election too close to call.

National opinion polls suggest the race for the popular vote in Tuesday's election is so close that only a statistically insignificant point or two separates the two rivals.

And an ever mutating Mitt Romney threatening a Zombie Apocalypse if he loses.

In what his campaign billed as his “closing argument,” Mitt Romney warned Americans that a second term for President Obama would have apocalyptic consequences for the economy in part because his own party would force a debt ceiling disaster.

Trying to scare Americans into voting for him, like some kind of economic terrorist.

So I'm glad to see that the Obama campaign is trying to remind voters what might happen if Romney wins...

Even if it would be far worse than that video. A real nightmare of mass misery, economic catastrophe, social unrest, religious fanaticism, environmental catastrophe, and war.

And who knows what might happen if Obama wins, but the result is so close the Republican extremists, their billionaire backers, and their teabagger militias, refuse to accept the result?

What I do know is that almost every one of my American friends is working his or her butt off this weekend to try to head off that zombie apocalypse. And I couldn't be prouder of them, or more grateful.

For we are truly staring into The Abyss. Obama may not be perfect, but he is the best we got. The fate of the world is now in the hands of all decent Americans.

And only the Army of Hope can save us...

Rumor has it. Romney is Harper's favorite, to win the U.S. election. That's enough to scare the hell out of me. Election fraud in the U.S. is no different than, election fraud in Canada. Gone are the days, Canadians are horrified by corrupt politicians, cheating to win in the U.S. Canada has never been squeaky clean. However, Canada is now a cesspool of corruption.

The American people, had better be careful of what they wish for, very, very careful.

I CANNOT believe the US election is 'close.' If it really is, its because Obama is 'black.' Even though he is mixed white and black, he’s fucken black enough for hillbillies to hate him. That's it that's ALL. What I've seen is, thanks to the fear-mongering years of Bush and the repellent racist right wing media, the crazies have felt safe in getting their crazy on in public. There's no second guessing these bottom feeders. They're flat out telling you who and what they are. Stay classy, hillbilly tea baggers! And then aside from the racists, there's just the DUMB ones. Dumb as mud. The morons who think the earth is 5,000 years old and that Jesus rode a dinosaur to work and Fred Flintstone cooked brontosaurus burgers. Those rural, white bible belting Christians that will be dodging around dead possums on the road when going to the voting booth, seething how Obama is a ‘Islamist’ who reads the ‘kee-ran.’ Romney is a dumb ass FOR dumb asses. I heard him on TV taking credit for ‘saving the automobile industry.’ What the hell? He REALLY said ‘let Detroit DIE.’ And this Republican follows the REALLY REALLY dumbass one, as president, with ‘Republican’ after his name that did SO much harm to America financially, economically, internationally, and morally that it looks like they’ll never totally recover from that. And people would vote for Romney who would go RIGHT BACK THERE?

Its unfortunate that the Hurricane hit predominantly Democrat New England states the hardest, in the sense that I hope it doesn't interfere with getting the vote out, and giving Romney an advantage.

One more Republican "administration", and the 'states will be like the collapse of the Roman Empire, times 10.

Hi meadowlark... Harper and his gang are definitely hoping for a Romney win, because they agree with the Republicans on just about every issue. And having a Big Oil government in power would make things so much easier. If the Americans are so stupid as to enslave themselves, as Canadians have done, they will know how we feel, and deserve what they get...

hi Wazz...you're absolutely right, the RepubliCons went after Obama fron Day One, they tried to sabotage everything he ever proposed, and the depth of their hatred can only be explained by racism.
And how so many Americans could be fooled by that crass millionaire into thinking he's an agent of "change" when he's exactly the opposite, is absolutely frightening. But then Big Money and religious fanaticism have turned America into a mad house, and now anything is possible...

hi Rick...yes it is unfortunate, because after the ordeal so many have been through I wouldn't be surprised if many people didn't bother to vote. The Obama people are said to have a very good ground game, so hopefully they can counter that. Because you're right, another Republican regime at this critical time will bring down the American Empire, and the rest of us as well...

And it bothers me, it's worrisome even, that IF Romney wins and a religious KOOK becomes President, our own religious KOOK PM will be go absolutely stark raving bananas with rapturous, divine, heaven sent bliss - as now all of North America will be governed by right wing religious NUTS, which has GOT to be a biblical portent come true for these dickwads. Then watch for the Jesus quotient to be ratcheted upward in BOTH countries. And then the overwhelming question in both countries will become - how do we separate religious zealots (idiots) from the state?