Harperland and the Big Pig's Baby 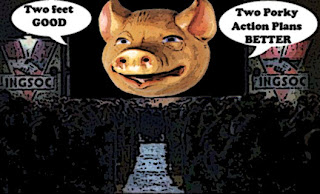 OMG. In the darkness of Harperland I sometimes can't decide whether it's like living in Orwell's 1984, or on his Animal Farm.

Or both at the same time.

But what I do know is that it's a scary place.

Where the truth is what Big Brother says it is. The Big Pig from the grubby vote buying Porky Action Plan just had a baby.

And now its squealing message is coming at us from all directions...

Because you know, the Cons don't have the money to bury impoverished veterans.

But they do have all the dough in the world to bombard us with their crass  propaganda.

When combined with previously approved advertising expenditures, the government is looking to spend at least $9 million this fiscal year on advertising for its responsible resource development measures, and $4.7 million this year on the War of 1812 vignettes.

And all the gall in the world to label it an Economic Action Plan, and make taxpayers pay for what amounts to blatant ads for Big Oil.

Ads that would have us believe that the oil sands will create jobs across Canada when more than 90% of them would be created in Alberta. Have us believe it's all about greenery, clean air, and grazing deer. Instead of this gaping wound in the side of the planet.

And that the truth is on their side, even as they muzzle scientists.

Oh boy. You know when the Cons tell us that their brand new one sided FIPA deal with China is good for Canada, instead of an outrageous SELLOUT.

Tell them Big Brother... or Big Pig.... I know the truth is what you say it is. And that you think we are idiots, who can be fooled into believing anything.

But this is still Canada not Animal Farm eh?

Only Cons are that easily led or deluded.

And we don't believe a word...

But we have the people, we can also make videos.

Yes I too am sick and tired of seeing TV ads from the Harperland Connie's daily, telling me how great they are doing and how they are all about a 'clean, green' environment and whatnot. What a load of crap. As they de-fund northern scientific labs designed to study climate change and water tables, they plot to sell them off, secretly and behind closed doors with zero Parliamentary scrutiny, to the private sector. Where of course they will then just become tools for more propaganda as the 'studies' then, out of the public realm, will not be owned by government but by oil companies and other polluters, and all objectivity will be lost. Meanwhile their 'we are all about responsible resource development' load of shit tax funded propaganda commercials belie the Cons actual motis operandi of refusing to answer questions on the topic in the House, of withholding data from Parliament, refusal to hold open committees or listen to scientists, or allow elected MPs to scrutinize their shitburger plans to destroy Canada's ecosystems and environment. This government is a travesty. It is un Canadian. It is shameless and embarrassing, dangerous and dishonest. But they perpetually run ads saying the opposite, and the REAL problem is TOO MANY CANADIANS BELIEVE THE BULLSHIT. REALLY. Harperland has reduced if not destroyed the great Canadian Parliamentary system into a series of bogus TV ads where the truth is hidden and the Big Lie rules.

That's the way it is in a Communist country. Their lies and deceit are almost comical, they are so obvious. China is so corrupt, it's sickening.

Murray River is demanding in court, for the removal of Chinese miners. The Chinese only need
to know, 100 words of English, to take our BC mining jobs. The Campbell/Clark BC Liberals, are permitting this. There are thousands of BC citizens, looking for work. We have University and College Grads with huge student loans to pay. Campbell thieved and sold everything out of BC, he laid his dirty hands on. He too gave BC's resources to Communist China.

Christy as Campbell's Deputy Minister, and the rest of the Liberals, were right there, when Campbell thieved and sold our BCR. All of them knew Campbell's crime. The BC Liberals have worked for Harper. They are in on, China's takeover of BC. BC mills were shipped to China, along with their raw timber. That was also thanks, to the evil Gordon Campbell and his slimy Liberals.

China is cheating miners in South Africa, out of their pay. Every country, where China owns their resources, China cheats all of them. This is the vile country, Harper has permitted on our Canadian soil.

Harper is no different than a Communist. Harper is destroying our Canadian democracy. Our Civil Rights and Liberties have been taken away from us. Our Freedom of Speech is under threat again.They are looking for every feeble excuse, to monitor the inter-net. Harper hates his dirty deeds being posted on the web, for the entire world to see. I'm afraid, the world sees Harper for what he really is anyway. Even our Human Rights are being stolen from us.

Harper is a Traitor, doing High Treason crimes against Canada.

I keep saying this. If you don't want to be given to Harper's Communists? Provinces need to get the hell out, from under Harper's evil government. Why in the hell aren't Canadians seeing this? Jeeezus!! CSIS even warned us, of Harper's evil intentions. Red China had already made huge inroads into Canada. BC was specifically mentioned. Can't it be seen? China already owns BC, plus all the jobs too?

You might want check these sites. I didn't read any of them, but I know what their contents will say. Your hands aren't clean either.

There are a lot more.

Yes, I cringe and want to throw something at the TV every time I see these glitzy, absolutely false, lying ads. In BC here, we are getting a double whammy - BC's Liberals are also running an ad campaign along the same lines. Also using tax dollars instead of their party's funds which would be more appropriate (if not legal) as it is within a certain time frame before an election.

Can't we sue Harper's government for false advertising? As well as BC's Clark for using tax dollars for election propaganda?

Can we sue the NDP and Liberals when they put out theirs?

hi Janice...I have the same reaction, you just can't get away from them. And they are all so hollow and fake, and indistinguishable from Big Oil ads. And goodness knows there are so many of those. We probably can't sue them for false advertising but we can make them pay for it in the next election...