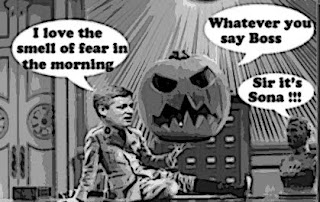 I'm quite sure that when he was a callow youth Halloween was Stephen Harper's favourite holiday.

A day when he could bully and scare other kids to death, and get away with it.

Just like he now horrifies decent Canadians, every day of the year.

So I wasn't surprised to see him order a Con MP, from Transylvania, to sink his teeth into the NDP's imaginary carbon tax.

While vampires suck blood from their victims, the NDP’s very scary carbon tax would suck money from Canadians’ pockets. Mr. Speaker, I do not want to tax your carbon, but the NDP’s Halloween trick is the terrifying tax. That is why Canadians are calling on us to put a stake through the heart of the horrendous hair-raising carbon tax. Happy Halloween.

Or command his braying minions to pass a police state bill banning masks.

To show his love of Halloween, and his contempt for democracy.

Only to be scared shitless himself, when the ghost of Michael Sona suddenly came back to haunt him.

Sona said the Conservative Party headquarters was closely involved in the local Guelph campaign. "We were a target seat for a while and there was a lot of direction from headquarters," he said, with people often dropping into the campaign office or offering advice.

To remind Canadians who was REALLY running the horror show in that riding.

So it's really not surprising that a photo-op with kiddies at 24 Sussex Drive, which was supposed to make him look half human, turned out so badly.

Not just because Harper was so shaken, he forgot his lines... 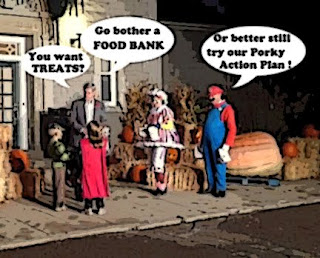 But also because his bodyguards, who are clearly as paranoid as he is, treated the poor children like terrorists.

A devil's pitchfork, a swashbuckler's cutlass and at least a couple of fancy swords were among several Halloween toy weapons prohibited at Prime Minister Stephen Harper's residence — though a pint-sized Wolverine passed the screening area bearing faux claws.

Oh boy. I guess the NDP was right eh?

Don't go looking for treats at Harper's House of Horror.

For all you'll get is dirty tricks and monster budget bills. 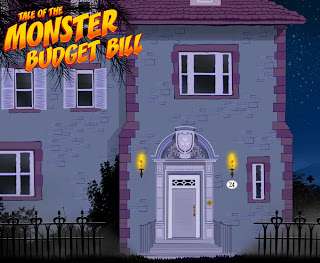 Or as I always say eh?

Who needs Halloween when we live in Harperland?

When we got Harper... 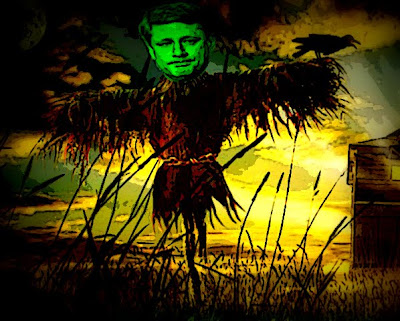 Oh, poor poor Simon. You know maybe Harper ought to go across the street and egg Muclair's place. Bet he would be hidden under the bed in fear, what a useless dunce of a.....well he isn't a "man" at any rate. Please keep writing, as it makes donating to the CPC so much easier, plus we all have a good laugh at your expense.

hi anonymous...you know I wouldn't put it past Harper to want to egg Mulcair's place. Because he's almost as afraid of him as he was of those children tonight. But of course he would NEVER do it. Great Jelly Roll Leader couldn't possibly run fast enough to get out of there before he was caught. And if he's afraid of a little kid's plastic cutlas, I can only imagine how much he must fear Mulcair's meaty fist. WAAAAH... Mummy... Mummy... the bearded man hit me !!!!
Gawd. It's embarrassing. Our plan was always to make him look like a dangerous cowardly idiot. But who knew it would be so EASY?
However please don't let any of this stop you from contributing to the CPC (Con Party of China). I encourage all rabid rednecks to impoverish themselves for the good of the country.
Just so I can tell them the day after the election, so so sorry, there's a sucker born every minute...

P.S....have you ever considered that your anger might be my pleasure? Or that I might be the one who is laughing his ass off... ;)

HAHAHAHA! The anonymous one making jokes about someone else's cowardice! Typical hypocritical bullshit from that sort!

Remember to get your prescription renewal before the weekend psycho-loser!

Thwap, lol......tell us how your lack of repect is going to cause the government to fall? Bet you are still paying your taxes too.......Some revolutionary you are, lol

I envy Harper. He doesn't have to buy a monster costume for Halloween, because he already is one. Harper even acts like one.

Never in the history of Canada, have we ever had such a disgusting piece of work for a P.M. as Harper is. Harper is a litany of, lies, deceit, corruption, thefts, dirty tactics, dirty politics and he cheats to win. Stalin, Hitler and Mussolini all did the same as Harper did. All dictators have identical personality's. All of them were absolutely insane. All dictators are paranoid. All of them are terrified for their lives.

I wasn't the least bit surprised, Harper was scared to death of the toy weapons. Harper kinda gave himself away on that one. Harper knows exactly, how much Canadians despise him. Rumor has it. Harper's whopping $47 million security bill, has gone way up. All Communists leaders, fear for their lives.

Harper is a Traitor, doing High Treason crimes against Canada. Millions of Canadians are wondering why, Harper isn't in prison? Harper should at least be forced, to have a mental evaluation. His behavior is every bit bizarre as, Stalin, Hitler and Mussolini's were.

You said "his bodyguards, who are clearly as paranoid as he is, treated the poor children like terrorists." Well, I can't agree MORE. Harper was expecting a kid dressed as a suicide bomber? And I bet there was some racial profiling going on, too. Right now I am in a state of shock watching Harper's House of Ghouls (what used to be known as the House of Commons) as the CONS, led by that little dickworm grease ball Pierre Poilivre lie about the non existent NDP 'carbon tax,' and how they ran such a 'clean' election campaign, saying only the Liberals were 'found guilty' of robo calls. Naturally they COVER UP the FACT that ONLY pro-Conservative Robo calls directed people to fictitious voting stations. The Liberal calls informed voters that the Connie running in Guelph opposed abortion rights for women, but they forgot to include the message was from the Liberal campaign, which broke that rule. Only a CON man would compare THAT to deliberately misinforming NON CONSERVATIVE voters about voting stations, sending them ELSEWHERE and thereby indulging in VOTE SUPPRESSION. And now they are attempting to obfuscate the case against them in court by using obstacles and roadblocks. Meanwhile their BOGUS and criminal 'navigation waters act' confuses water protections (which is for fish UNDER the water) with 'navigation' (which is for fucking BOATS on the TOP of the water) and it DELIBERATELY leaves 90% of what was left 'protected' in CONMAN ridings! Much of it in SWINDLING CROOK Tony Gazebo's zillionaire riding!Can you BELIEVE this shit? It’s sure good to know fucking GOLDIE HAWN won't have to worry about pollution and environmental degradation, hey??

Ha! I'll tell you after you get away from your computer to do all that lefty-killing you psychotically giggle about.

Which will be never, since you're the biggest fraud out of any of us.

Yeah, you got nothing.

Why kill when nature does it for us?