Mitt Romney and the Mormon Question 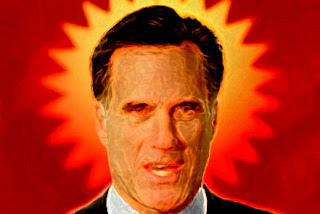 Lordy. I must admit that I didn't think Mitt Romney's deep involvement with the Mormon Church should be an issue in the U.S. election campaign.

For compared to all his other liabilities, and character defects, or his many crass sermons in the Temple of the One Percent, it seemed so trivial.

And besides in religion-crazy America, what's one more homophobic, women hating faith, or cult?

But now after watching this video I feel I might have made a big mistake.

Christ will appear in Jerusalem, Romney said, waving his hands for effect. “That’s where the coming and glory of Christ occurs,” he said. “We also believe that over the thousand years that follows, the millennium, he will reign from two places, that the law will come forward from one place, from Missouri and the other will be in Jerusalem.”

Because let's face it eh? Mitt seemed awfully...um...agitated, when he was talking about religion, and didn't know he was being taped.

And anyone who believes that some deity, any deity or Monkey God, could rule over us from Missouri a.k.a. Missoura, shouldn't be allowed anywhere near a nuclear button. Anywhere near the White House.

Or for that matter, anywhere near a White Horse.

Mitt Romney wants voters to see him as the man to save the economy and right the country, the redeeming American hero riding in on the proverbial white horse. Just not that White Horse.

That’s the one in the old Mormon prophecy attributed to Joseph Smith, which predicts that after the banks fail and when the Constitution is nearing collapse, Mormons flush with wealth — the White Horse, in the prophecy’s metaphor — will rise and lead America back to greatness. 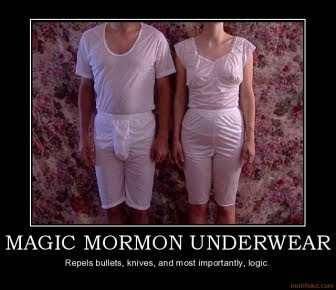 This is scary stuff:

After warning signs of trouble in the Middle East and anti-Mormon sentiment pervading the government, “You will see the Constitution of the United States almost destroyed. It will hang like a thread as fine as a silk fiber,” the prophecy has Smith saying.

But “it will be preserved and saved by the efforts of the White Horse,” who will “stand by the Constitution of the United States as it was given by the inspiration of God.” There will be a Black Horse — American blacks, as the text is commonly interpreted — that sides with England and France, but eventually they’ll all submit to the White Horse as the religion fulfills its world-conquering destiny in an Armageddon-style war with the Russians—while keeping an eye on the looming threat of China.

So I really wish somebody had asked the former Mormon Bishop this question:

Who inspires you the most Mitt ? The Billionaire's Club that bankrolled your campaign, some mysterious old geezer in your secretive, and extremely political and reactionary church, Bain Capital, or Jesus of Missoura?

And could you give us a rough idea when the Third World War might start? Because the rest of us REALLY want to know. So we can start digging, or stocking up a year's supply of food, like Mormons are commanded to do.

But nobody did.The MSM was too afraid of being accused of religious persecution. It was just another question Romney never answered. Another attack that didn't land.

So millions of Americans will vote for a man without having any idea about his bizarre beliefs, or where he might take them. 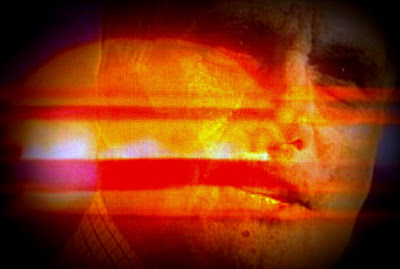 Oh boy. Everyone duck and cover. Or assume the Mormon missionary positions.

Or just pray to anyone or ANYTHING. The American election is almost here.

And it's going to be a long and scary night...

We are on the verge of seeing any remnant of the U.S. that once was swept away forever tomorrow. If you think that it has gotten more weird and violent over this past 12 years, wait until romney and his anthropomorphic minion take over if they manage to steal this election also. (chimpy was never elected in either election, as those of us not brain-dead may recall) harper and the christofascist right will go into a feeding frenzy for the next 2 years. Any virulent, vitriolic scheme they can come up with will only be mirroring what is happening to the south of us and that is how they will justify their sociopathic behavior from now on. "Well, they're doing it!" If romney and ryan are placed into the preznitsy by the s.c.o.t.u.s., God help Canada because we will feel the overflow from the onslaught of their insanity for as long as they rule the crumbling nightmare empire and also as long as harper can remain the dictator of the "true north, strong and free". Have a great Monday, y'all and learn to speak 'murkan in your spare time. It just may save you when the 'murkans come to "liberate" us because of our oil.

The Magic Underwear almost got my vote, but its the butt that lost me. Obama has my support.
What is really scary is how close fancy pants is. If the GOP had the sneaky skills of the CRAP (con-reform party), America would be doomed.

When Harper was Policy Chief, for his Northern Foundation Party in 1989. It was said. Harper was linked with Nazi intellectuals and Christian Fundamentalists.

Harper favors Romney to win. That's enough to scare the hell out of anybody.

Read: Harper gave a speech in New York, at the Council of Foreign Relations. This was Sept 25/2007.

And Ottawa has been taken over by a religious CULT, plain and simple. I honestly don't know of a way to stop this destruction of Canada, short of an outright revolution, but the glaring spotlight must be intensified on this coup d'etat, before it's too late.

hi anonymous...like you I fear what a Romney victory might do to Stephen Harper and his Cons. I'm afraid it might embolden them, and drive Great Leader over the deep end. But then I might be too busy building my own private bomb shelter, or moving to Patagonia, to notice. For I truly believe that the United States is on the verge of a cataclysmic shock that will rock it to its foundations. And any Canadian who thinks it won't affect us is, as we say in Quebec, dreaming in technicolour. You know, when I think about it, Patagonia sounds interesting... ;)

hi Steve...yes I was impressed by the Magic Underwear too. Very nifty. I think all that strategic padding must make even the tiniest guy look like he's hung like a horse. Not that I need it of course. ;)
Seriously though, it seems to me that Romney's fortunes improved when he started blatantly lying about everything, just like the Harper Cons do here. Although of course, they stole it from the Bible or the asshole of Karl Rove, so the Con circle in unbroken. I'm still hopeful Obama will prevail, but even if he does, I see only trouble ahead...

hi anonymous...yes I've read that speech, and what an absurd little speech it was. The bullshit meter is off the scale, and the self importance is grating. Who does Harper think he is? And what must foreigners think of us? Gawd. It's going to take at least ten years, after the Cons are defeated, to get our reputation back...

hi Wazz...yes, I didn't have time to get into that, but of course the rabid Christianist Con base shares a lot of beliefs with the Romney Mormons. Especially the one where the Russians are the villains in the Final Battle of Armageddon.
And yes, all progressives must work together to shine a light on what's happening, so less informed Canadians can understand what's going on. The Cons can do their worst, but the truth will set us free...