The Robocall Scandal Heats Up Again 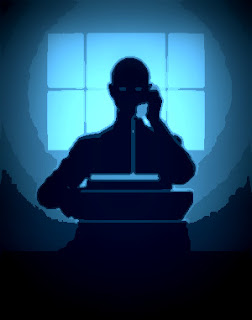 Is this Pierre Poutine?

Why do you ask?

Because do you hear that ringing sound? My dark cockroach. It's Elections Canada.

Three days before the last federal election, Elections Canada confronted the Conservatives about suspicious calls directing voters to the wrong polling stations but were met with denials of any wrongdoing from the party’s lawyer, internal emails show.

In one email, an official with the agency reported a growing number of misleading calls as voting day approached and said some were worried that a “scam” to mislead voters was under way.

And they seem to have found a pattern, like the one Frank Graves discovered.

The poll, conducted April 13-19 by Ekos Research Associates, found that Liberal, NDP and Green party supporters in the seven ridings were more much more likely to report receiving a telephone call late in the election directing them to the wrong polling station than Conservative supporters, or opposition supporters in other ridings.

Except that this one is so big it's starting to look like a country-wide conspiracy.

At 11:27 a.m, as the agency struggled with chaos at a polling station in Guelph, Hawdur sent an email to a number of colleagues: “It’s right across the country except Saskatchewan; a lot of the calls are from electoral districts in Ontario. it appears it’s getting worse. Some returning officers reported that the calls are allegedly identifying Elections Canada.”

And the most outrageous attempt in the history of Canada to try to suppress the vote, and steal an election.

The Cons tried to discredit Frank Graves and his poll, claiming the poll was wrong because he was biased. But if Elections Canada finds the same thing their case will be further weakened. For a pattern changes everything, and makes every individual case stronger.

And in the court of public opinion at least, Harper and his gang won't stand a chance.

For we'll make sure they wear that dirty scandal, like an anvil around the neck of a drowning man, all the way to the next election.

If they're not arrested first.

And just when the Cons thought they were safe eh?

The fatal pattern is emerging. The circuits are humming.

And the times they are a changing...

Churn those circuits..
Keep up the excellent work !

I am not with Stephen Harper ..
I am a Canadian ..

Harper will lie and cheat his way out, of his election fraud, the same way he lied and cheated, to win the election. We are not dealing with a decent, normal person that, has any morals or ethics.

Dictators are obsessed with control. The first thing they absolutely must control first is the media for, their propaganda machines. Then it's a police state they control, judges, courts, scientists, elections, Ministers and, everything else they get their hands on.

Any decent, sane person, can't look people in the eye and, out and out blatantly lie, deceive and cheat. Dictators can.

In their own words:

“It’s right across the country except Saskatchewan; a lot of the calls are from electoral districts in Ontario. it appears it’s getting worse. Some returning officers reported that the calls are allegedly identifying Elections Canada.”

Now that is damning.

"The times are a changing"

Come gather round children and look at the freaks
That once passed themselves as the NDP
Now pity, hate them and lock them away.
For the times they are changing

hi salamander...whenever I feel a little depressed I think of the RoboCon conspirators, and those in the party who knew what they were up to, and frantically tried to cover up their tiny footsteps, and how they must live in fear, and then I feel better eh? :)

hi Gloria...I very much doubt that Harper will get caught up in this robocall scandal,even though he is responsible for creating the foul climate in which such a thing could happen. But the damage it will do to him and his so-called government will be considerable. For it feeds into other narratives, and reinforces the notion that him and his party can't be trusted.
And we can make hay with that...

hi Beijing...I thought so too. It's fraud as well as voter suppression. The only thing that worries me is whether Elections Canada has the resources and the will to pursue this case until hell freezes over if necessary...

hi anonymous...good try but I'm afraid your poetry still needs a bit of work. You've definitely got the cadence part down, it's the logic that's missing. And to be frank it's a little depressing. Try thinking of the glorious progressive sun rising, and the gurgling sounds of the Con regime going down the drain, and hopefully it will inspire you to greater things...

Nah, I got it right. I think of the boot coming down on throat of the "progessive" sun and the gurgling? That's the death rattle of your movement. Come on, you know it is true.

The left and progressives in this country are splintered and dying. Wacko Jacko was your last, best chance. Your done and you are only now just understanding that your time is running out.