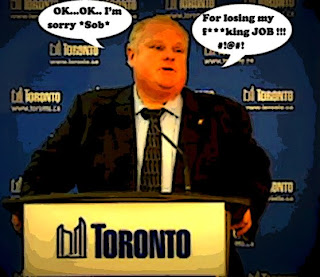 When I saw Rob Ford today, sort of apologizing for the first time in his life, I'm almost felt sorry for him.

"Looking back, maybe I could have expressed myself in a different way. To everyone who believes I should have done this differently, I sincerely apologize," Ford said in a prepared statement at a Tuesday afternoon news conference at city hall.

For his voice was hoarse, there were tears in his eyes. And the sight of a Con blubbering always moves me deeply eh?

But then I remembered that he lost his voice cheering wildly at an Argo rally a few hours before, and then I noticed his brother Doug.

For he was there at Rob's side, like he always is, with a large posse of Con operatives directing the whole operation. And once again I couldn't help but wonder, who is the REAL Mayor of Toronto? 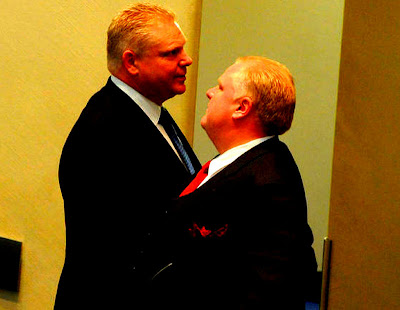 Because if it's Dougie, as I strongly suspect, we're heading for the Twilight Zone.

First, the good: When Doug Ford was bemoaning the anti-democratic nature of his brother’s removal from office, he was onto something. That’s the sort of thing that can resonate with voters.

But then he immediately veered back off into some crazy alternate universe where he and his brother are permanent victims who’ve never done anything wrong. Early in the conversation, Doug bemoaned the fact that apparently his brother is being punished for “raising money for kids.”

For apart from running Rob, Doug also dreams of being Stephen Harper's Big Guy in Toronto, the Con who offers him the bleeding city on a platter. As they discussed at that bubbah BBQ. He wants to be a PLAYER.

And if him and Robbie are as casual about lobbying rules when dealing with the penny ante operators who infest city hall, I shudder to think what might happen when they meet with the Big Boys. 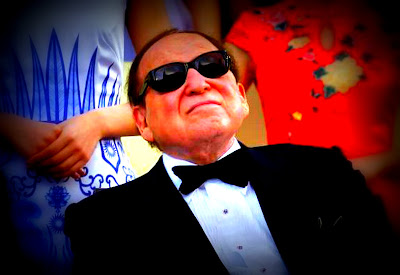 In a sign of casino companies’ eagerness to build in Toronto, Mayor Rob Ford got a visit at City Hall from Sheldon Adelson, controversial owner of the Las Vegas Sands empire and one of the world’s richest men. Adelson, 79, arrived at Ford’s office Thursday afternoon with his wife, Dr. Miriam Adelson, and two aides for the private, unpublicized 45-minute meeting that he had requested.

Because wherever Rob goes, so goes Doug.

Christopoulos did not respond to a query as to whether Councillor Doug Ford, the mayor’s brother, who disappeared from a budget committee meeting around the time of the visit, attended the meeting.

Except when Rob isn't playing Mayor. 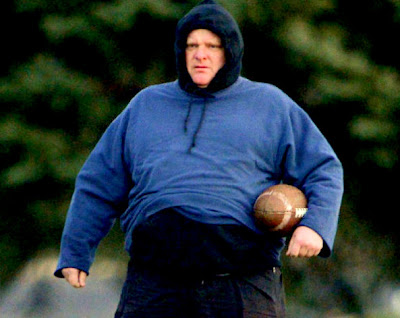 And Doug doesn't have to tell him what to do, or watch him like a hawk in case Rob says or does something outrageous, before Doug does. Because those two crass rednecks are capable of ANYTHING.

But then that's the best part about this court ruling eh?

If Rob goes, so does Doug. And so does Stephen Harper's Master Plan to use their Moron Nation to conquer Toronto.

Yup. Spare me the messy details.

By whatever legal means necessary, end this Con klown show.

Tell the Fordzilla his time is running out.

And spare us from this nightmare... 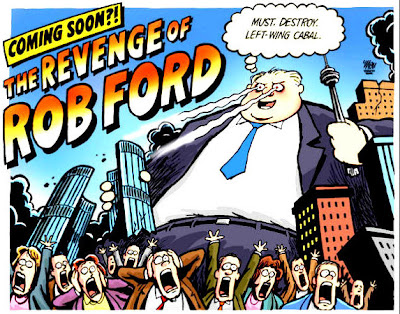 I didn't feel sorry for him one little bit - not even almost.

Firstly, it was a classic non-apology.

"To everyone who believes I should have done this differently, I sincerely apologize,"

Secondly, misdirection - his conflict was not, as he claims, how he raised funds for those kids:

"I was focused on raising money to help underprivileged youth. I never believed there was a conflict of interest because I had nothing to gain and the city had nothing to lose. But I respect the court's decision," said Ford, who sounded hoarse."

It was as follows:

"On Monday morning, Ontario Superior Court Justice Charles T. Hackland said in his ruling that the mayor violated the Municipal Conflict of Interest Act by speaking and participating in a council vote regarding a financial penalty he was ordered to pay after he was found to have violated council's code of conduct by soliciting donations to his football charity using city materials."

That miserable excuse for a human being is in damage control mode.

nice to see a con go. one down, some many more to go.

In case you missed it the ballad of Rob Ford

Ford will win, the left will lose and the rest of us will have a good laugh.

In order to make sure rob ford not returning,make sure you do not vote for him in the next election for mayor