How About That Orange Wave Eh? 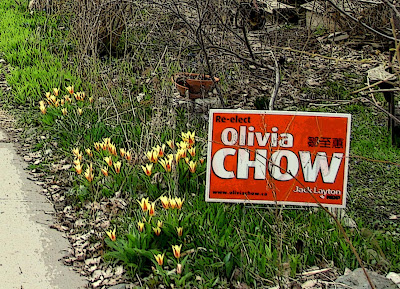 Whoa. What a difference a day makes. Yesterday I was dreaming about an orange wave.

And wondering if the tulips would ever bloom this year in the darkness of a Harper majority.

The EKOS-iPolitics survey of more than 3,000 Canadians finds 28 per cent of decided voters now support the NDP, compared to 23.7 per cent who plan to vote Liberal. The Conservatives hold less than a six-point lead, sitting with 33.7 per cent support with just one week to go before election day.

While numbers could still change significantly in the final week of the campaign, Graves said current figures suggest the NDP could take a “breathtaking” 100 seats. With that count, the once-unthinkable scenario of a Layton-led coalition with the Liberals begins to emerge, he said.

And as for those tulips.

They're now a humungous beanstalk.... 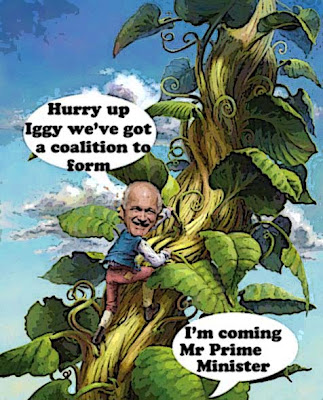 And the best news of all? Great Ugly Giant Midget is sobbing in his castle, desperately hanging on to his tiny minority.

Current numbers would likely produce 131 seats for the Conservatives and about 69 for the Liberals, according to Graves. Together, the NDP and Liberals would have a clear majority with 38 more seats than the Conservatives, as well as a collective 20 more points in popular vote.

And hopefully working on his resignation letter... 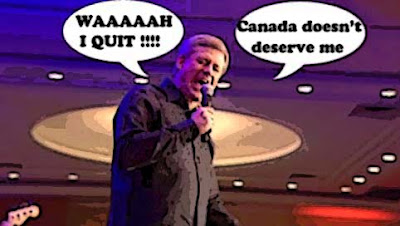 Because how is he going to attack the Leader of the "Separatist" Coalition? When Layton is stealing votes away from the separatists and doesn't need them to form a government.

Oh yeah. One more thing...the Liberals should remember what the Bloc is learning the hard way. When you attack a popular guy like Jack with ridiculous ads like this one...

You risk looking really cheap and desperate. And making Jack even MORE popular. Because that ad is sooooo tacky, and this is grotesque.

Let Harper have his majority - I never understood why everyone was so afraid of a man who would likely be there for one term and wouldn't likely change a heck of a lot. I disagree with the guy on policy and direction, but he will not destroy the country.

Or just IDIOT. I mean why would we fight ourselves when we have the monster where we want him?

When a big orange wave comes roaring straight at you, you either ride it or you get SWAMPED.

Oh Great Polar Bear God of The Great White North. I don't know what I've done to deserve this. But please tell me so I can do it again.

Well, the NDP also often fades near election day . . . but that's usually because of plausible Liberal claims that to stop the Cons you have to vote Lib, NDP have no chance etc., leading to some combination of tactical voting and staying at home among NDP partisans.

hi Atlanta Roofing...yes that's true, but only when the NDP is in third place, and people switch their votes to the second place party. Now the situation could be reversed with Liberals going over to the NDP. Should this situation continue and develop my question to the Liberals would be: Are you ready to put your country before your party? OK then prove it...

My reply to Blunt Objects' rant:

"Let Harper have his majority - I never understood why everyone was so afraid of a man who would likely be there for one term and wouldn't likely change a heck of a lot. I disagree with the guy on policy and direction, but he will not destroy the country. Just because he has a majority doesn't mean he'll have free reign"

Where the Jesus H. goddamn cosmic fuck have you been the past five years?!?!? Harper's a corporatist (read fascist) of the first order. He's just drooling for a majority so he can get any number of his troglodytic backbenchers to proffer up anti-gay, anti-women's rights, anti-abortion, pro-death penalty, pro-Israeli apartheid, pro-Jebus Nation legislation. He's chomping at the bit to privatize every last thread of an already badly shredded social safety net and sell off ALL our resources and industries to foreign buyers. He's a warmongering goon who'd rather spend $30 BILLION FUCKING DOLLARS on toy jets than give you grandma so much as a not-for-profit band-aid. He despises democracy as much as he despises progressives and has proven in spades that he is more than happy to send out his stormtroopers to literally bust our collective heads and stomp on our rights. He's a liar, a bigot, and a petulant, ignorant fool with a Napoleon complex as big as all out doors and he's a VERY REAL THREAT to every thing that once made Canada the envy of the World.

And you're pissing your Michael Ignatieff underoos and stamping your widdle feet because people have quickly caught on to the fact that Iggy hasn't gotten his act together from the get-go? Look, pal, I've voted Lib more times than not, but your party does NOT deserve to be in the lead simply by virtue of its existence or its history. The LPC hasn't had a progressive vision since Pierre: Chretien felt he deserved the PM job because he was a loyal party warhorse and what he did with it reflects that; Paul Martin was a neo-liberal millionaire first and a Canadian second; Dion, while a decent enough chap, was completely out of his element and was, sadly, too easily sabotaged; Ignatieff seems to be treating the whole thing like an intellectual exercise and acting a lot like you -- pouting that things are going his way and lashing out.

The Libs don't have any natural, sacrosanct claim to running this country; that makes you sound as bad as the frickin' Cons. The enemy isn't the NDP or progressives or socialists or the Bloc: it's Harper. It's Harper and his mob of gun-happy, war loving, Law and order, anti-union, anti-education, science-hating, anti-free speech, anti-democratic, police state, corporatist, homophobic, misogynistic, xenophobic, backwards, ignorant, bible-thumping yahoos, and they WILL try to reshape Canada in THAT image.

So if that happens to mean that this time in this election cycle it means that another progressive, democratic party takes the lead instead of the Liberals, or worse, the draconian nightmare of a Harper majority, then for your own sake, the sake of your fellow citizens and your beloved Canada STOP PISSING IN THE WIND, HELP GET REAL PROGRESSIVES ELECTED AND GET YOUR EFFING PRIORITIES STRAIGHT!

I went to the NDP rally in Toronto a couple of weeks ago. I came away thinking, "Maybe they really CAN do it! Maybe Jack Layton really WILL be our next Prime Minister!" I soon decided I was being delusional... but it looks like my optimism wasn't so misplaced after all.

It's hilarious to see how some conservatives are freaking out online at the prospect of an NDP government.

That beanstalk toon is pure gold. Could be true this time next week, too...so let us vote and pray!