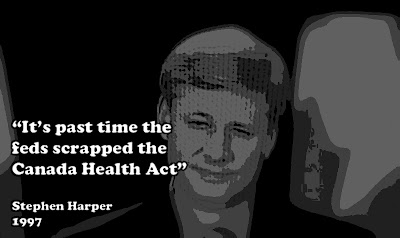 As you know I've been hoping for a very long time that some progressive leader would throw the above quote in Great Ugly Leader's face.

And ask him how he can pose as a defender of medicare, when for years he tried to MURDER it?

I was very disappointed that nobody did that last night. I thought it was a wasted opportunity. I was very very sad.

So you can imagine how happy I was to see this new Liberal ad...

The scummy Cons have been throwing Michael Ignatieff's past in his face for YEARS.

Now it's OUR turn.

What is Stephen Harper HIDING?

This isn't a game, this is a war for the survival of our country.

Hit them where it HURTS...

Right on!
About time Harper was called on his "not-so-secret agenda"

Good on the Liberals. Harper thrives on fear and it's time that the opposition fight back and paint an even more fearful picture. Emotions trump reason unfortunately. That's what ad execs know fully. Shame and fear are their bread and butter.

Don't get me started on the latest NDP ads attacking the Liberals. A) they will only amuse the dippers, and B) they lack emotional resonance.

hi anonymous...yes it is about time. I understand the reluctance of some progressives to use attack ads. But no government in Canadian history deserves to be attacked more than the Harper Cons. And when you're in a life and death styruggle like this one, you must fight fire with fire...

hi Beijing...yes good for the Liberals, although they did leave it very late. They should have run this ad earlier, and used its warning to hammer Harper in the debates.
And yes, emotion does trump reason unfortunately. But Harper is using them to make people afraid of us, and we must use them to hammer home the message that he is the real threat.
As for the new NDP ads, I just saw them, and they are absolutely PATHETIC. I'm debating whether to write something about them, but right now I just don't have the heart...