Stephen Harper and the Smoking Gun 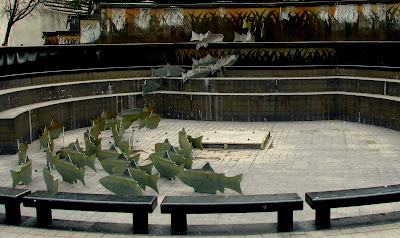 For a while today I thought this picture, and the miserable weather, kinda summed up the election campaign today. Cold, bleak, empty, and going nowhere.

There was this ugly story.

As Boivin said in good Québécoise... "Plus cheap que ça, tu meurs" Cheaper than that you die. What were the Liberals thinking?

Not that the NDP isn't being cheap too.

What are they thinking? And why would they make Harper look better than Ignatieff?

And what was Ignatieff thinking by blabbing on about a coalition? And giving the Con freaks more ammunition to demonize it? Oh boy. Sometimes the dumb HURTS.

But then just when I was about to call it a wasted day, and contemplate getting drunk, although I don't really like booze, along came some good news.

The Cons buzzards seem to be losing some feathers, in la Belle Province and beautiful British Columbia.

Stephen Harper will lose seats in Quebec, is dropping support in British Columbia and will likely not form a majority government on May 2, according to a new Nanos Research poll. 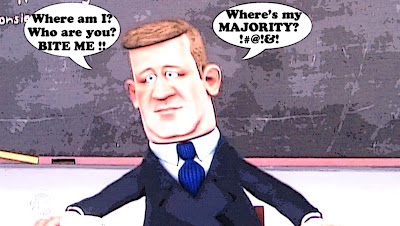 So a complete meltdown can't be ruled out eh?

And the BEST news? Somebody found the smoking gun that could put the majority he craves sooooooo much out of its misery.

Because let there be no doubt, Gratzer's "solution" is a prescription for the death of our medicare system.

And if we use that quote and others against Great Crazed Leader we can defeat his plans to turn our country into Amerika.

If we get out the vote. If we vote smart.

If we stop fighting each other, and remember that this time, for the sake of our wonderfully human medicare system.

For the sake of our beautiful country.

It's ANYTHING but Harper...

I have to disagree with the last post. As long as we say ABC or ABH, we split the vote. And as long as we split the vote, Harper wins. Again.
We really have to stop splitting the vote in order to get Harper out once and for all. For this one time, NDP and Greens should vote Liberal just to get Harper out! The platforms are really freakin close anyway.

You should sign up with Votepair.ca, where you swap votes with voters in other ridings. If you are an NDPer in a riding the Liberals are more likely to win, you vote Liberal, and vice versa. If you are a Liberal or a New Democrat in Saanich-Gulf Islands or Bruce-Grey-Owen Sound, you vote Green, while Greens vote either Liberal or NDP everywhere else (particularly in Guelph).

Failing that, it's fairly simple to vote strategically, AND effectively. Just follow a few simple rules:

hi James...I understand where you're coming from. Since Ignatieff is, at this point, looking like the runner up, it would be nice if he could end up with enough seats to be able to more effectively make the case for heading a coalition or whatever you want to call it government.
However, there are problems with your approach.
I was going to explain that, but as you can see James Bow dropped by and explains it better than I ever could. Whew. :)

hi James...thank you for your comment, and for explaining how to make strategic voting work for us.
As clearly and as elegantly as always. I've already printed what you said, stuck it on my fridge, and I'll be printing off a lot of copies tomorrow... :)

James is so cute - just this one time vote liberal - last year Iggy thought it was a good idea to let private go in Quebec so nay, Liberals are also a part of the problem. Remember it was the libs who cut billions out of healthcare, so tell me, about how great the Iggy libs would be at protecting healthcare?

I read Herbert's article in Torstar today - seems no different between the red door or blue door!

The Liberals new Health ad is much better than the first, the Tories whined about..maybe they should have said nothing!

hi Jan... James isn't suggesting that at all. He's suggesting that we vote for the progressive candidate most likely to defeat a Con. That could be a Liberal, or an NDPer, or someone from the Bloc. Just don't waste your vote voting for a candidate that doesn't stand a chance. Look I know that mentioning Ignatieff in your presence is like waving a red flag in front of a bull. ;)
I have my problems with him, and Jack is a sentimental favourite. But what I can't accept is the argument that Ignatieff is worse than Harper. Because that's just not on...

hi anonymous...yes I like their new healthcare ad too. And wait until they can add this new quote.

You can be sure that as soon as I summon up enough courage to make a video, I will be using it too... ;)

Classic NDP propaganda from Jan, Liberal Tory same old story yadda yadda yadda. It really pisses me off to watch Dippers claim that they are somehow better, more perceptive, and better defenders of our freedoms and such when they can't see the reality that Harper is profoundly worse than not just any Lib leader to date but even any prior PCPC leader/PM we've had either! Just as liberal media bias is one of the ways I can tell a right wing or even what appears to be a moderate conservative voice is disconnected from reality (or unwilling to talk honestly about it, the end result being the same) for the left and especially with Dippers it is whether they claim Lib Tory same old story/little to no difference between Libs and Harper's CPC that proves either profound dishonesty or profound disconnection from realty because the reality is clearly anything but that, but it doesn't work so well for the NDP's political aims.

I'm fine with targeted strategic voting even if it supports the NDP, but the reality is that in most ridings it will be the Libs that gain from it than the NDP which is why they talk out of both sides of their mouths about the need to stop Harper while attacking the Libs and Ignatief as highlighted in this post of MS's. They want to eat their cake and have it, just as they have in the last two elections, and they don't care if that allows Harper back in power. I judge by the reality of the actions taken, not the rhetoric of the language spoken, I do that with ALL political parties and people, and by that standard it is the NDP which are the real sellouts to enabling the Harper regime to first come to power and then to maintain it. Which is why I have become so hostile to NDP messaging on this point, and why I call it out as the garbage that it is currently when I see it. The Dippers are so lost in their grudges when the Libs used to scare people to their side when it was the PCPC that they can't let it go when finally it is real, and while I could excuse it in 2006 by now there is NO EXCUSE for not seeing the reality for what it truly is this time!

This time the barbarians really are at the gates and that the Libs are a qualitatively less dangerous and damaging a choice than a Harper government. even a minority one, can ever be! That there is serious and profound differences between the two parties and leaders, and that one will be far more destructive to basic social programs, ideals, justice and democratic ideals than the other! I've said since before 2006 that once Harper was stopped the NDP could and should go back to their usual shots on both sides, but that Harper was a unique threat that was too dangerous to be allowed power, and for that I've been mocked, derided, claimed to be a paid Lib operative, etc by Dippers. You would think after the record of the last five years of Harper government they would finally be wisening up but it doesn't seem that way does it Simon?

Dippers still arguing that they are the only trustworthy party because the Libs are the same as the CPC (they say Tories but the reality is the Harper CPC and Toryism are not even distantly related to each other), hardly a reality based view and clearly one shaped by partisan blinders (and that is assuming these people atually believe this as opposed to cynically messaging what works best for their party, placing politics before principles and all that, the same thing they love to accuse everyone else of while they of course are too noble to do any such thing...yes, it makes my teeth ache which is why the sarcasm, sorry). Which is what Harper counts on to keep the vote divided and allow him to retain power and worse to reach for that majority.

Simon: Thank you for your understanding of my comment. Janfromthebruce: what do you not understand? What would you be willing to do to end the Harper regime of corruption and lies?

Do you any of you remember the exprssion " the lesser of two evils"? We have presently a PM who is all about hiding and taking 5 questions a day, and a potential PM who is standing in front of strangers answering question he may not be confortable with... who do you want as your leader??