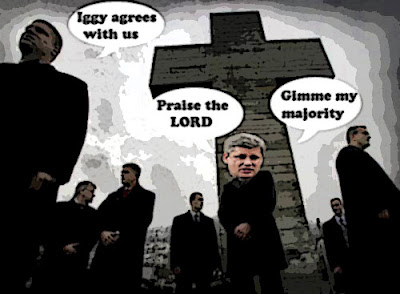 I see that Stephen Harper is taking his days off on Saturdays, instead of Sundays as he did in previous campaigns.

So he can play Big Daddy.

Harper's decision to take a day off campaigning and be there for his son impressed the other attendees. "We thought he was here for sure when we saw the vans circling and the TV trucks outside," said parent Rick Adams. "It's amazing that he is able to take the time and come and see his son."

And try to make Canadians forget the theocon conspiracy in the heart of his sinister government. Or that he gets his marching orders from the Great Mamoona.

But why did Michael Ignatieff play the Dark Lord's game, by praising this nonsense?

Liberal MP David McGuinty also criticized the move and said Canada already has a safeguard for religious freedom. “We have a document in this country that does that; it's called the Charter of Rights.”

Instead of using the occasion to ask Jason Kenney and company why, if they are so interested in protecting religious groups, did they so savagely attack KAIROS?

And if we are going to spend millions on an Office for Religious Freedoms, or in Con code an office to defend Mamoona's people from the evil Muslims.

Could we also spare a few miserable dollars to protect bullied children in this country FROM religion?

In neighbouring Halton Catholic District School Board, chairwoman Alice LeMay came under fire recently when she told Xtra! the board “doesn’t allow Nazi groups either.

Because homophobia is a huge and growing problem in Canada. Just check out this tape of two Toronto Raptors players innocently holding hands after winning a big game.

It attracted so many rabid homophobes the comments had to be disabled.

And since they came to power not only have the Cons have done nothing to fight homophobia or bullying, they have actively encouraged it by treating more than a million Canadians as second-class citizens.

But we're more worried about the plight of the religious in other countries?

Oh boy. You know my motives are pure. I support all the progressive parties. I have no axe to grind. I put my country before any party. And all I ask is that we work together to destroy the Harper Cons.

But about two or three days a year, I give up. And tonight is one of them.

All I have the strength to say is that if the way women and gay people have been treated by the Cons isn't part of this campaign, wake me when it's over.

If we don't hit the Cons harder than that, we won't win.

And if anyone still doesn't get that.

Hit them with the HARPedo of Truth...

They say laughter is the best medicine. I hope so eh?

Pray for this poor lost country. And our bullied children.

Great post Simon. Perhaps Iggy forgot that we have a Canadian Charter of Rights!

I found his response pandering to the regressive type voter and that I found disturbing ad progressive it was not.

Janfromthebruce: like it or not, Canada is actually more theocratic than most of us would like to admit. I've had a realization today.

Iggy may be gaining votes at the expense of the NDP but those 'blue Grits' are leaning toward the Harpercons. Maybe he's trying to get them back?

About my realization. I learned from a few contacts why Martin Cauchon is in trouble in Outremont. Why he's even less popular than the nobody candidate, Sebastien Dhavernas, in 2008. It turns out many, particularly the Chassidic community, who used to vote Liberal, are turned off by Cauchon's part in the same sex marriage legislation. I'm amazed, that even in so-called Progressive Montreal, how many are homophobic, or at the very least, their views are, "I don't care what people do, but don't let them do it in front of me..."

Iggy, agreeing to this center is probably trying to pander to those socially conservative ethnics who once voted Liberal until Jason Kenney got their mits on them.

Someone has to impress on Iggy that Harper never, ever, never-ever-ever, says or proposes anything for reasons of principle or altruism.

Yes, in principle, such an office isn't a bad notion at all (speaking as an atheist, who would merely be shot on sight by all concerned) but the good reasons for such an office have nothing to do with why Harper might be proposing it.

Iggy is still too naive.

It was a load of crap and suggesting Iggy is naive is to suggest and think that Libs are all about progressive thoughts and all.

Remember, Liberals were not about gay rights until it became more popular, and if you checked with some of their past and say present MPs, would reveal exactly that truth.