The Con Porkers Day of Judgement 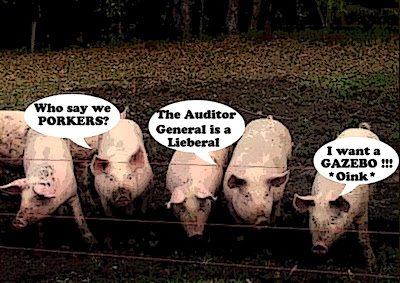 Oh dear. It looks like the porky Cons have been caught with their snouts in the trough.

The auditor general says the Harper government allegedly misinformed Parliament to win approval for a $50-million G8 fund that lavished money on dubious projects in a Conservative riding.

And she suggests in a draft report the process may have been illegal.

And to make matters worse, just when they were preparing their usual defence...

They've also been accused of additional porkitude, by forging the Auditor General's words.

Auditor General Sheila Fraser has written a scathing letter rebuking the Conservatives for misquoting her in a parliamentary report on the costs of the G8/G20 summits in Toronto last summer,

The Conservatives' report, presented as a dissenting opinion to the Commons the morning Parliament was dissolved last month, quotes Fraser giving high marks to the Harper government for prudent spending on the summits.

The report quoted the auditor general as saying: “We found that the processes and controls around that were very good, and that the monies were spent as they were intended to be spent.”

Not that it wasn't always obvious that the porkers were out of control... 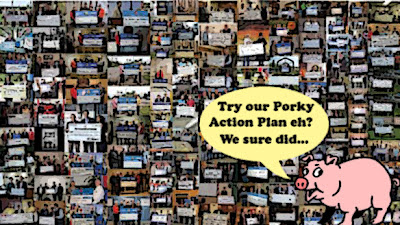 But I wonder what kind of defence the Cons will mount now... 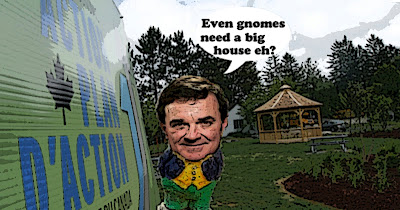 You know I don't think it will work. Not when that little bastard once threatened to jail the homeless.

Except when can we arrest them for contempt AND corruption of Parliament?

Thank goodness they're building all those new prisons.

At least now we know why they were in such a hurry for an election.

Welcome to the Big House Cons.

We've got those porkers where we want them.

Now hit them until they SQUEAL....

To paraphrase Sheila Fraser, "the final report is not as bad as the interim report leaked." But she can't release the final report because she reports to Parliament and it's not in session.

Given what I heard, I can't think of what is "not as bad". It's obvious those new sidewalks in Perry Sound were paved with taxpayer's money. Ditto for a new arena. It's obvious the Contempt Party treated those taxpayer dollars like a slush fund. It's also obvious that Parliament wasn't informed about these projects and how many $$$ were attached to them. So I can't figure out what "not as bad" could possible mean.

Once again, they show their contempt for Parliament and their scheming/lying electioneering on the taxpayer's dime once again.

hi Beijing...I'm not sure that Sheila Fraser is saying that final report isn't as bad as the draft. All she's saying is that people shouldn't jump to conclusions. But as some CBC reporter said, it could be even WORSE.
I think one of the big reasons the Cons pushed so hard for an early election was because they knew that would halt the report in its tracks. So now they can claim they want the report released, but they know the AG can't do that.
And the best part is they can't claim that the AG was misquoted because they have just been accused of doing the very same thing.
You know I've always admired Sheila Fraser, but now I think I LOVE her... ;)

To wait or not to wait, a pile is a pile, no matter the size.

What really erks me is that the CONServatives will slime their way out of this latest scandal. Do you see anything any more in the MSM about the "In and Out" or the "Bev Oda" or the "Carson" etc. etc. etc.
The CONServatives seem to think that the Canadian population will forget about all of this and just blindly go to the voting booths on May 2nd and give them a majority.

What a waste! The whole G8/G20 summit thing is just one 3 day photo op for world leaders beholden to the financial elite.
Whatever was apparently accomplished last summer wasn't worth the price tag.
Here in Canada, there aren't really any political parties worth voting for anymore. I remember the days of Pearson, Diefenbaker and Douglas when people seemed to actually look forward to voting. Yes, I'm that old.

hi sassy...I don't know why any Canadian would be shocked by what the AG had to say, because it should be obvious to all that it was just a Con vote buying program.
They went for a quick fix with short term benefits timed to coincide with an election, instead of investing in long term job creation for the future.
The really shocking thing is that the Cons lied again, and so many Canadians don't seem to care...

hi anonymous...you're right, and as I mentioned to sassy, that's the really disturbing part. In the defence of those who don't care, I can only say I don't blame them for being confused, because I follow politics closely and I can't keep up with all the Con scandals. But by now they surely must have got the hint that something is rotten in Ottawa, and if they don't care then they are equally guilty. A democracy is only as good as the citizens of that democracy make it. So they are demeaning themselves, and demeaning this country...

hi John...I agree with you about the G8/G20 summits. They were a monumental waste of money, nothing was accomplished, it was just a massive photo-op for the Harper regime.
I understand how you feel about our political parties, but I hold Harper's gang responsible for making Parliament look like a circus, and deliberately discrediting the democratic process. But of course the problem goes even deeper than that. I don't believe our schools are doing enough to educate kids about how important it is to be engaged in the political process, and above all VOTE. I saw a TV report tonight where some university kids couldn't identify the party leaders. I was so discouraged after that I had to go and lie down for a while. But of course we can't afford to give up, or it'll just get worse. I was pasting up some of my home made posters today.
It's not very exciting but at least it's something... :)