Hoping for an Orange Wave 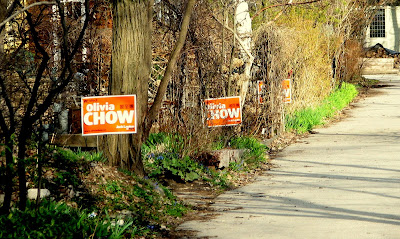 As you know I have always tried to be as non-partisan as possible. All I want is ANYONE but Harper. But these days, like most people in my neighbourhood, I'm also hoping for an orange wave.

I'm hoping for that because I honestly believe that what Jack Layton has managed to achieve in Quebec, breaking the stranglehold of the Bloc, is a historic opportunity that may not be repeated again.

And I'm worried about what might happen in Ontario.

The surge of the New Democratic Party in Quebec appears to be holding strong but a new survey conducted by Nanos Research suggests there has been no similar bump for the NDP in Ontario, where elections are won and lost.

I'm worried that if the NDP and Liberal support remains roughly the same, the vote split could help the Cons. And I know we could lose that historic opportunity.

“There are probably a number of voters in Quebec who have watched what’s happened and have started to park into the undecided column,” he said. “ It doesn’t mean that they are necessarily going to move to the New Democrats. It means that they are up for grabs in the last seven days of the campaign.”

Just like I know that if Ontario did join the orange wave even more people in Quebec would vote for the NDP, so would people in the Atlantic provinces and British Columbia. We could steal some Con seats even in Saskatchewan.

I hope my Liberal friends don't hold these words against me, or treat me like The Enemy. Because of course I'm not. There are a lot of good Canadians in that party. Including the person I love the most. And I'm sorry what those foul bully Cons have done to their leader.

“Those negative [Conservative] attack ads helped form Canadians’ opinions of Michael Ignatieff even before Day One in this election,” said Mr. Nanos. “He started off with a disadvantage” and has not been able to overcome it.

But the sad truth is Ignatieff has been damaged beyond repair. The Liberals have lost Quebec. Their party is old and tired. And it can't offer the hope Jack Layton and the NDP can, for something new and different.

And then there is this other consideration. If the Liberals did end up in third place, and working in a coalition government with Layton as Prime Minister, a little humility might do them good. They would be forced to come to terms with what kind of party they really are. And that would make it easier for them and the NDP to merge, and form the Liberal Democrats. Our best hope for a Con-free future.

I know that changing old habits and party loyalties is hard. I realize that anyone who advocates that, is likely to be shot at by both sides. And I am aware, as Steve from Far and Wide writes, that our biggest enemy is cynicism.

We keep telling ourselves that voters aren't cynical, but every measure suggests the opposition- they are, and nobody has really changed that perception, unless having no wear on your tires classifies as profound inspiration. People kicking themselves trying to figure out why Harper isn't floundering in the polls, chiefly it's because there is such a firm wall of pure cynicism surrounding the whole process, all the actors, all the brands, that the impetus for substantive change never manifests.

But after the breakthrough in Quebec, that's the other big reason I am hoping for an orange wave. As an idealistic person I don't want to live in a cynical Con world. It's choking the life out of me like some dark winter of the soul.

And nothing can break that grim hamster wheel of despair like something new and different.

Oh well. That's all I wanted to say. I will not be criticizing the Liberals in what remains of this campaign. Just working as hard as I can to help the progressive cause prevail. Still asking progressives to vote smart.

Because first and foremost those evil Cons must be DEFEATED.

But in my heart I'll also be hoping for an orange wave. And a new beginning for Canada after so many years of darkness.

I may be disappointed eh? But that has never stopped me before.

Spring brings life back to The Great White North. 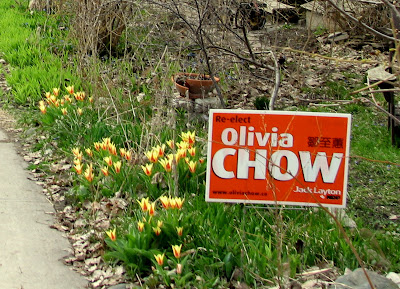 We are going to get CON seats in BC and SK. Hang on brother it will happen. The surge in Quebec helps and I expect that surge to get better in the days ahead.

Hang on to your hat, the ride is going to get bumpy as the LPC and CPC attack the NDP.

Its time New Democrats to stick it out. Stay at home. The LPC will send out desperate messages in the days ahead, thats because they are trailing the NDP.

Harper was in BC today, in campbell River because the NDP are going to win there. Its close but we have to stay strong.

If you are an LPC voter in SK or BC, you need to think hard about voting NDP this time.

hi Ricky...as you know my main concern is getting rid of the Harper Cons by whatever legal means necessary. But as I explained in the post the prospect of an orange wave has me really excited. Mostly because of the historic opportunity in Quebec, but also because I believe the whole of Canada needs some real change, and at this point in history I believe Layton and the NDP are the only ones who can provide it. Go wave go... :)

But I thought on Debate night how amazing Layton was and I sensed a certain je ne sais quoi about him. He seemed vibrant and strong and sharp. I thought then maybe there was going to be "something" big about him. He's my pick for winner of the election. Even if he only gets Opposition, he's still the winner. Even if he only grabs a few more seats in Quebec, he's a winner. I've been amazed by him this campaign.

I'm hoping Jack wins too, Simon; maybe if he does he can teach Obama what it means to be a true progressive...