John McCain and the Cone of Silence 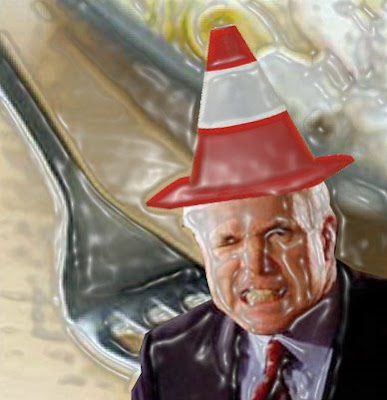 Uh oh. It looks as if reality finally caught up with John McCain. Like a fork chasing a sausage....or an old banger.

It seems that when he was supposed to be in a Cone of Silence during the Saddleback Jump-up Jesus Fest. He was only wearing a traffic cone.

Senator John McCain was not in a “cone of silence” on Saturday night while his rival, Senator Barack Obama, was being interviewed at the Saddleback Church in California.

Members of the McCain campaign staff, who flew here Sunday from California, said Mr. McCain was in his motorcade on the way to the church as Mr. Obama was being interviewed by the Rev. Rick Warren...

Now I don't know if McCain was listening on the radio, or his campaign team was making phonecalls or receiving text messages. Or whether Poppy put on a Guantanamo hood so he couldn't hear or see a thing.

But I must say one part of his conversation with Rick Warren really makes me wonder.

The part where Poppy just about bust his britches when he said this:

McCAIN -- And by the way, Justices Alito and Roberts are two of my most recent favorites, by the way. They really are. They are very fine. (LAUGHTER).

What he said and the way he said it seemed like he was replying to what Obama had said about Roberts. And the audience thought so too because they LAUGHED.

So his campaign's outrage seems a little forced.

“The insinuation from the Obama campaign that John McCain, a former prisoner of war, cheated is outrageous..”

But of course the point is he could have cheated. Or since they keep bringing it up...lied about his POW experience.

Or that ridiculous cross in the dirt.

Where did all the witnesses go?

The answer my friends is blowing in the wind.

Poppy we hardly know you.

Play me that video again...