Did Steve Fossett Fake his Own Death? 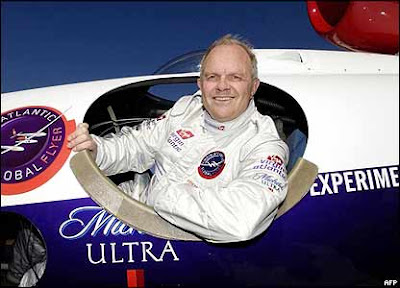 When Steve Fossett, the great adventurer, disappeared almost a year ago, the news really hit me hard.

I love flying and he was one of my heroes.

I even thought of going down to Nevada, renting a small plane, and joining in the search.

Sébastien brought me gently down to earth. OK not so gently.... more like a crash landing.

But now comes the real shocker.

Did Fossett fake his own death?

Last September, America's great aviation daredevil took off on a routine solo flight, and was never seen again. Now, as allegations of an elaborate double life begin to emerge, investigators are questioning whether he really died – or even crashed – at all.

On the one hand I hope they eventually do find the wreckage...so this story can be laid to rest.

But on the other hand I can't help hoping that he survived.

That he's living on a remote tropical island. Resting in a hammock sipping a margarita. Poor but happy. Spinning fantastic tales to disbelieving islanders....about flying around the world without landing. And other crazy stuff.

High Plains Drifter ! WOW, what an ending (or beginning) to His Legacy....Each September, I'll travel to the Eastern Sierra Nevada's Mountain Ranges, dry lake beds, canyons and plains just to celebrate the mystery that the Flying M sleeps to hide.

September 3rd., I'd like to declare a Holiday "Steve Fossett - High Plains Drifter"

May the updrafts forever guide your Journey S.F.

Hi Apollo!!! I envy you it's beautiful country down there. Tricky place to fly though.Easy to go down and take a look only to find yourself in a tight spot with no room to turn around or climb....
That's why I think his luck ran out and he's probably in some gully somewhere. Of course Apollo let's not forget the Area 51 theory. If he is still alive let's hope he's on a tropical island and not in a secret prison... :)

a fan of Steve Fossett, I am also
AKA High Plains (Planes) Drifter. Within a week of his departure, I mentioned to some close friends that he may never be found - maybe just a hunch evoked from the Mystique & Beauty that abides in the Sierra Neveda's.

The following titles (spins) might enlighten you re: the Morning of September 3rd. 2007:
1. "Right Turn @ BODIE QUADRANGLE"
(Fact are Facts spin)
or

3. "The SECRETS of the SIERRA
NEVADA can only be decoded from
SPACE"
(Mystery/Adventure spin)

1. "Right Turn @ BODIE QUADRANGLE"
(Facts are Facts spin)
On that morning at the FLYING M RANCH (8:45 am), Steve Fossett (SF) told a personal pilot (who worked for Baron Hilton) that he was going to scout for for a location suitable for a planned Landspeed record attempt, a 2 hour estimated roundtrip flight (although he had enough fuel for a 4 hour tour)-NOTE: if I were scouting in this territory in the type of plane he flew, I would want to be a passenger - not the pilot.

and LANDSPEED Record?
Why would SF want to attempt a Life Threatening "Speed of Sound" Landspeed record ???

SF may not have needed to scout for dry lake beds based on the following known facts
NOTE: I believe a minimum 10 mile length is required for any attempt at a current Dry lake landspeed record (correction welcome).

2. DETOUR to OZ (Hollywood spin - Romance/Action).
Well, I'll just say that if SF had a wish to become as infamous as HOUDINI, then it was granted on September 3rd., 2007.

2A. S.F. must have seen the Movie "The Illusionist" staring Edward Norton - a must see movie about the perfect disappearing act driven by ROMANCE.

or could SF resurface in the future and take on a secret identity like one of the past heroic ACTION masked crusaders:

or was SF a Jim Morrison Fan? - what a dead end tale that was - is!

3. "The SECRETS of the Sierra Nevada can only be decoded from SPACE" (Mystery/Adventure Spin)

3A. Dear Emilia Earhart, hope you are well. Please give Steve Fosset our Sincere Forever Best.

5A. When I travel the Sierra Nevada
each September, out of nowhere
a plane will appear in the horizon - no color, no markings, no sound, just gliding....

S.F., May the Thermal Updrafts forever guide your Journey.