Georgia and the End of the World 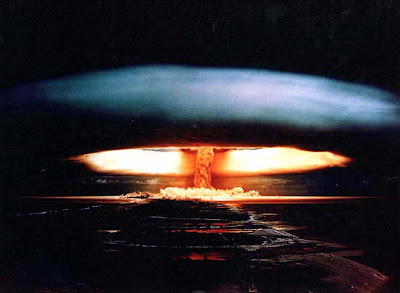 I've got some good news and bad news on the Abyss/Apocalypse front tonight.

The bad news is that I have no idea when the Third World War is going to break out.

Because anything could happen in this black hole.

The US has strongly criticised Russian military action against Georgia, in the bitter conflict over South Ossetia.

In a telephone call to Georgia's leader Mikhail Saakashvili, the US Vice President, Dick Cheney, said Russian aggression "must not go unanswered".

But now that the Dark Lord Dick Cheney is involved it could happen ANYTIME.

The good news is that if by some miracle we dodge that missile we could get whacked by an even bigger black hole courtesy of this monster.

But at least we know now when that could happen. September 10. So we can be ready.

Oh sure. They say it's impossible. But who knows?

They've been wrong before.

Which makes me wonder what would be the better Apocalypse....the better way to go.

Watching the sky burn and muttering as I fry "South fucking Ossetia???? Who knew???AAARGH!!! "

Or falling into a black hole shouting "We discovered the final secret of the Universe !!! WHOOPEE!!!"

I'm leaning towards the latter.

Even though the first one has a better video....

And you thought I was going to play Georgia on my Mind.

Hell or the Hole. What a choice.

P.S. Do you think we could have the beginning of the Third World War coincide with the end of the closing fireworks show at the Olympics?

I like how Georgia's aggression isn't being mentioned...but what with that pipeline to Turkey, applying for membership in NATO, and the highest amount of US military aid per capita, of COURSE Russia is the aggressor.

Never mind that Russia has a long history of support for both North and South Ossetia, that most South Ossetians have Russian citizenship, and that it was Georgia that violated the previously existing ceasefire in S. Ossetia (resulting in the current Russian build-up & operations in the region)...yeesh. Its going to get worse before it gets better I think, and not just in the Ossetias. This could spread to other states in the area, prompting both militant separatists and federalists to step up rhetoric AND violence. A fuckin' mess.

There's also the possibility that Russia is using this to occupy Georgia and force what Bush likes to call a "regime change". Shouldn'e mentioned that.