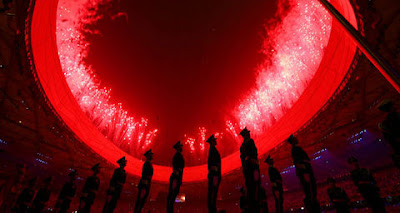 After watching the Opening Ceremony of the Beijing games all I can say is WOW.

What an amazing show.

The lights, the colours, the children, the flying acrobats, the printing blocks that morphed into the Great Wall, the 2008 Tai Chi performers who moved as one. And of course the awesome fireworks.

What a thing of beauty. It was the best show I've ever seen.

And to make things even more special for me.... there was even a pipe band.

When I heard Scotland the Brave playing as the athletes marched in, at first I thought I was hallucinating.

Then I thought oh no....don't tell me the Chinese invented the bag pipes too.

But it was only the humble Mains of Fintry Pipe Band.

What a wonderful story.

Unfortunately I don't have any video of them playing at the Opening Ceremony.

You know they may be amateurs. But I like them.

An unbelievably fantabulous spectacle, Mish MoneyPenney. Difficult to see how London tops it.

Well, Simon. You like bagpipes. I'm starting to like you more and more since I love the sound of bagpipes. They really are an amazing sounding instrument.

Unfortunately, I missed the opening ceremomies since I was talking on the phone with a friend but I've seen snippets of it that were wonderful.

Hi Omar !!! I see the designer is being criticized by some for placing style over content. *sigh*
I actually thought that although 75 per cent of the performers were from the Chinese Army the show was remarkably artistic and gentle.
But as for London I pity them having to try to match that. I read a hilarious piece in a British paper where a columnist wonders whether it's too late to back out.
And paints a picture of what the opening ceremony might be like.
Guys running around filling bowls with chips and the chief organizer standing in the glare of the cameras screaming "Somebody must know where we put the catherine wheels" !!! :)

Hi Aida !! Well I didn't have much choice since I was born in Scotland. But I really do like them and I was once a drummer boy.
Sometimes I think about joining a pipe band again. But since believe it or not it is a lot of work I think I'll look for a samba band instead !!! :)