Did Obama Blow the Saddleback Forum? 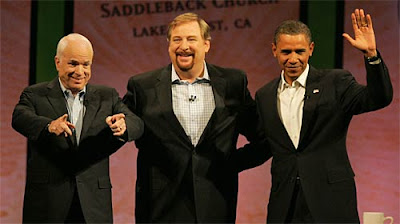 I recorded last night's revival meeting between Obama and McCain. But when the time came to watch it this morning after about ten minutes I gave up.

The sight of two men fighting for the top job in the most powerful democratic country on earth trying to convince people that God is on their side made me dizzy with disgust.

So I read the transcript instead.

And now I have a few questions....like why did Obama bother? Where did he think he was?

For better or worse, Obama seems to have chosen to treat this event as sort of an intimate evening with Rick Warren — that just happened to be nationally televised. McCain, by contrast, treated it as a straight campaign event: he had his stump speech talking points ready, and he was eager to cram as many of them into his 50 minutes as possible.

And does Obama REALLY not know the difference between a baby and a blob?

OBAMA: Well, you know, I think that whether you're looking at it from a theological perspective or a scientific perspective, answering that question with specificity, you know, is above my pay grade.

Really? But isn't the Prezeedent supposed to know EVERYTHING?

I suppose the evening wasn't a total bust. Americans got yet another example of why John McCain would make such a dangerous President.

But even then I wonder.

In a television/YouTube age it's the simple message that counts. It makes you look like a strong leader. Think Harper and Dion in this country. With his pro-choice stand Obama never had a chance of changing many Christianist minds.

But did he lose the support of other undecided Americans by sounding ....to them... like a wanker? Instead of the Strong Leader they crave. Did he try to please everybody and end up pleasing only his own supporters?

Quick first impressions: Obama spent more time trying to impress Warren (or to put another away) not offend Warren while McCain seemingly ignored Warren and decided he was talking to folks watching on TV. The McCain way of handling this forum is usually the winning way. Obama may have had more authentic moments but McCain was impressively on message.

Don't get me wrong, this will play well with some but McCain's directness and snappy answers that were on message allowed him to look commanding on that stage.

Which is the LAST thing we need. My conclusions?

The United States is the closest thing to a scary theocracy in the democratic world.

After a slow start, John McCain is now ready to go down on his knees and blow the religious-right all the way to Moscow. i.e. do ANYTHING to win.

Nobody ever got anywhere in Amerika overestimating the intelligence of the American people.

And with less than three months to go, unless Obama sharpens up his act and quickly.

We could all be heading for The Abyss ......in the Garden of Good and Evil.

Thanks for the link. I wasn’t as disgusted as you seemed to have been, at least not with Obama talking about his faith. That reasonable kind of “faith” I can deal with. I still think it’s superstitious nonsense, but at least it seems to have a benevolent influence on him.

McCain was just throwing red meat to the mouthbreathers however. Drill! Drill! Drill! Pro-Life!!! All “liberal” judges should be canned!!! Kill Bin Laden and defeat evil in the world!!!

That sound you hear? Yes, my head banging on the desk.

You asked why Obama attended. In hindsight it may seem like it was a dumb idea, but consider that the audience was primarily evangelical Christians--a group among whom McCain leads by better than 2 to 1, according to recent polls. That means that if McCain did any worse than twice as well as Obama, it counts as a win for Obama. And, from where I sit, McCain didn't come close to doing twice as well. My sense is that Obama struck a lot of previously skeptical evangelicals as a reasonable and God-fearing man (a real achievement given that so many of the questions touched on issues that favor Republicans among these voters--abortion, judges, stem cell research, etc.). That's a big improvement in light of where Obama started.

There really wasn’t a downside for Obama. So, while it counts as a “win” for McCain according to the usual suspects and has probably nailed down a lot of evangelicals who might have been wavering, he’s also boxed himself into some positions that will alienate independent voters. Not to mention a lot of women.

Hi Red !! I wasn't really disgusted. Just perplexed and worried. At this point in time McCain's big advantage is that more Americans trust him on national security. So it is imperative that he come across as a decisive and strong leader...on TELEVISION.So musing as he did might please me and his supporters, but did it help him with the undecided? I changed my post a bit to include another view on this. Someone not part of the usual suspects who points out that Obama doesn't need to win over his supporters, but those who are now tuning in.
Obama would undoubtedly make a better President. But being President and getting elected are unfortunately two different things...

Ain't that the truth. This process is just brutalizing. I don't know why anyone in their right mind would put themselves through it. Years of campaigning it seems, hundreds of millions of dollars, endless ass-kissing to every group imaginable, countless debates, town-halls, stump speeches, interviews, and all the while endless crap stories, rumours, innuendos, slime, character assassination...

How long are our elections? Six weeks? Piece of cake!

i thinkamerica will need a more intelligent president not an old papa who wana fight but dunno how to fight!

Hi Ur!!! you know I like to joke around but when it comes to John McCain I'm really serious. He scares me. Because when it comes to war I think he's even crazier than Bush. Can you imagine THAT?
We need to find new ways to live together on this planet...not new ways to blow us up... :)