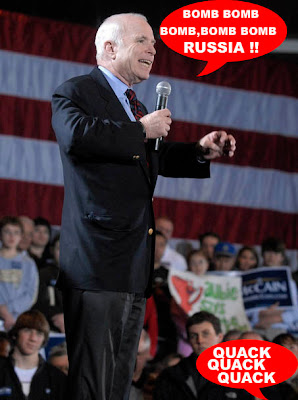 As this crisis builds, it's hard to know how to characterize John McCain.

Is he a belligerent chickenhawk?

Playing with matches in a tinderbox.

A songbird masquerading as a war hero?

In return for medical treatment at a civilian hospital, a privilege never granted to other injured POWs, McCain reportedly told NVA interrogators the name of his aircraft carrier, how many Navy pilots had been lost, the number of planes in his flight formation, tactics used during bomb runs and the location of rescue ships in the Tonkin Gulf.

Because of the revelations which McCain repeated in propaganda radio broadcasts, the North Vietnamese contemptuously nicknamed him “Songbird.”

Who got stuck in a Vietnam time warp and still believes in Total War.

Like the man he succeeded as senator from Arizona, Barry Goldwater--whose militaristic style alarmed voters when he ran for President in 1964--there is only one word to describe the prospect of John McCain with his finger on the button: scary.

Or a doddery old duck?

Or ALL of the above?

Now close your eyes and imagine that Russia just invaded South Ossetia....and Poppy is Da President. And he thinks it's Czechoslovakia 1968 all over again. The same country he keeps forgetting doesn't exist anymore.

I don't know why Obama isn't hitting back harder, when so much is at stake. But with only three months to go before the Great Enchilada.

Maybe it's time he should.

Hey. It's not just about the economy stupid.

could mccain actually lift his finger to push the button....i'd have thought he'd have to press it with his elbow. oh cruel, i know. do i REALLY care? nah.

McCain is a robot from hell programmed for 10,000 years of global war.

Hi Scout !! I would care if I were you. I thought Red Tory's post about McCain's reaction to the Georgian crisis was pretty scary.
I think John McCain is a step up the evolutionary chain from Dubya.
But when it comes to matters of war he's dangerous...

Hi Jay...there are some interesting articles out there that look at whether McCain is really in charge of his own campaign. Or whether he is just a robot or a puppet being manipulated by others. BTW I don't really want to pick on his age, because the wisest people in the world are old.
But his shaky grasp on reality clearly demonstrates he isn't one of them.
And then there is his incredible bad temper that many of his former associates have remarked upon.
Shaky grasp on reality plus short fuse add up to disaster...