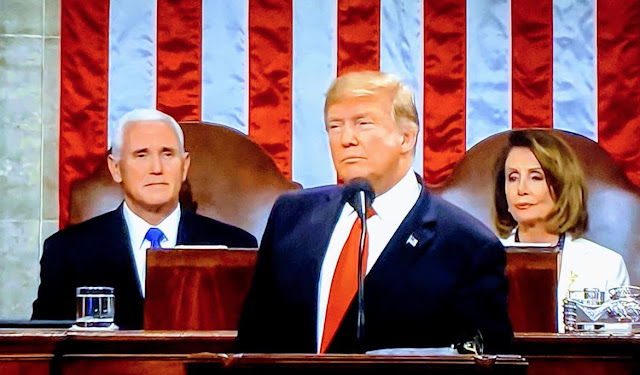 I tried to think of something to say about Donald Trump's State of the Union address, but this is all I could manage:

It was long, very long. His claim that investigating him was bad for the economy was pathetic.

The way he demonized immigrants was disgusting.

His failure to mention climate change even once was criminal.

And most painfully for him, Nancy Pelosi owned him... 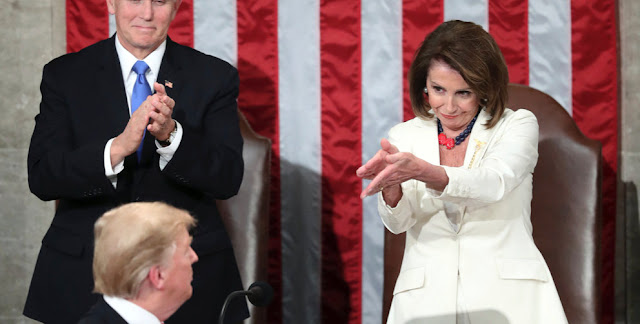 Without even saying a word.

In the image, the speaker of the House stands frozen behind President Trump at his State of the Union address on Tuesday night, she a vision in suffragist white, tilted head, pursed lips and outreached arms. The hands came together in what one Twitter user called a “walrus clap” that resonated around the world.

Although for me, this little Trump stole the show... 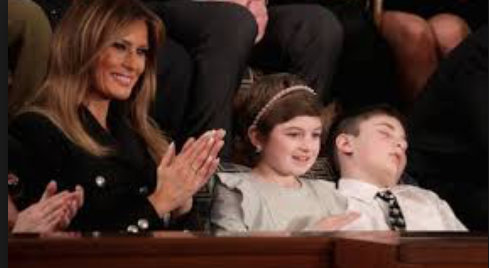 And deserves to be called a hero of the anti-Trump resistance.

An 11-year-old boy called Joshua Trump who was invited by his presidential namesake to his State of the Union speech fell asleep and has been hailed as a hero of the anti-Trump resistance.

As cameras panned to the audience, the boy could be seen napping while Donald Trump renewed his promise to build a US-Mexico border and declared illegal immigration “an urgent national crisis”.

For also making Trump look like a bore, as well as best reflecting the state I was in by the time the speech was over.

On the positive side, Trump didn't declare a state of emergency, or declare war on Venezuela.

So let us be grateful for small mercies.

And hope that his next State of the Union address will be delivered from a different location... 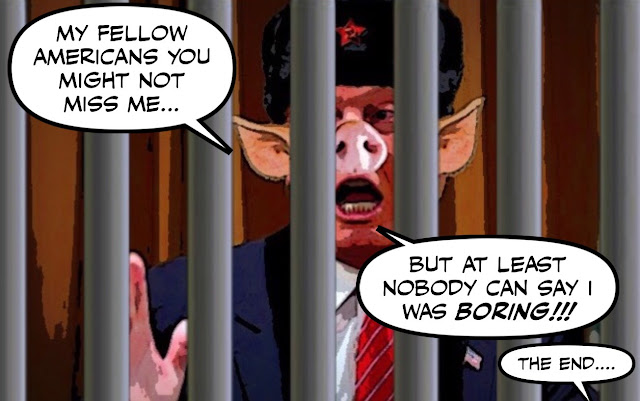 Labels: Donald Trump, Joshua Trump, Nancy Pelosi, The Rise and Fall of the Orange Oaf, The State of the Union

You're a brave man to watch it all Simon. Luckily, I ended up like the young Trump, head back, snoring peacefully. Old grandpappy Trump wont be pleased with the wee lad for such insubordination. And he wasn't wearing his little MAGA cap.
After watching the high(low)light clips later I to was shaking my head at Trump's inane statement that the investigations against him are bad for America. No Donnie, they're good for America. It shows a system that does not tolerate corruption at any level and there are severe consequences that could apply. Just ask pretty well anyone who was involved in your thoroughly corrupted campaign, or at least anyone who's not in jail yet.
The best part for me was Nancy almost bursting out in laughter after Trump's ridiculous claim. It will be a treat watching her toy with and jerk him around until his pitiful reign is finally put to rest. He's more than earned it.
JD

I didn't even watch it. I can't look at him and I can't stand to hear his voice. The fucker had the damn nerve to invite someone from the Pittsburgh synagogue and a kid named Trump who's getting bullied for his name. As he is the world's #1 vector of hate and bullying who has the blood of those 11 victims of the American Kristallnacht on his hands. He is a racist, racist, RACIST piece of shit and I want to see him behind bars!!!

.. ideally, some intrepid journo or leaker.. or both, reveal who actually wrote the grandios sneer that Trump duly & dully read from the lectern prompters. It was a deflection.. essentially the complete opposite of reality. Its exactly like Andrew Scheer, studying some gasbag blather that Hamish excreted .. so that CPC_HQ can polish the turd & focus group it for Scheer to regurgitate it via helpful Mainstream Media. Then some flack or evangel crank (think Huckabee Sander) can explain to North Americans that its how God's Will is promulated or fumigated.. well whatever.. you catch my drift

Anyway.. its all Amen, Glory Be, Look To The Golden Beaches or Fleeces, Our Father of the Virgin Brides, And I say A Great Wall. Glory Be.. OK these folks are pros at fooling themselves or getting normal people to run with the lemmings..

And So It Was Simon.. The Great Man Held Forth A Great Again Grift.. And We Watched Or Slept Or Wept.. Or Something .. for 1.5 f'n hours ! Astonished ..
But Parker Molloy via Twitter has a background removed Nancy Pelosi doing the F You clap clap for artists like you to drop into any scene.. check it out.. All the best eh !

Bernie Sanders’ response to STOU says all you need to know about the REAL issues in America. However, Trump has managed to get near everyone focused on the trivial and has morphed ALL of America into his bloody reality show. Pathetic! Egghead

I did not watch. Its like L Ron Hubbard, I limit my exposure because I have a lizard brain.

The religious nutters got a few table scraps. In their alternative universe its no more live babies ripped from their mothers wombs and government funding to teach creationism. In the real world its legislating against life saving or difficult end of life medical decisions and teaching evolutionary science. All that thanks to a con whose lifestyle mocks everything they claim to value. The devil works in mysterious ways indeed!
RT

Hi JD...The only reason I started watching was because I thought that it would be really short. At about the half an hour point I switched over to the movie Zapata, then when I went back I saw that Trump had stopped speaking like a priest and was ranting and raving about the wall. So I kept watching until I gradually sank into the couch and fell asleep. Lordy deliver us from this nightmare...

Hi Jackie....I don't blame you for not watching Trump, if I was an American I'd feel the same way. But as for little Trump who Indidn't see napping he's my new American hero. It's wrong for anyone to bully a child for any reason, but he must have figured out that Trump is also a bully and tuned him out. How happy we will all be when we can do the same...

Hi salamander....I would like to know who wrote the speech because at least the first part was a cut above the hideous stuff that the racist Stephen Miller usually writes for him. The problem was it sounded way too noble for the beast and he sounded totally phony and absolutely ridiculous. What I did find horrifying though was the sight of all those Republican congressmen slapping each other and guffawing away. The corruption of the American political system was only too obvious. Our parliament is more of a zoo than it once was but still better than what our poor neighbours have. Only the arrival of all those women gives me reason for hope....

Hi RT....I missed Trump's remarks on abortion, thank goodness, for Trump posing as a religious person has to be the ultimate in hypocrisy. The only good thing about that is that the evangelicals are shooting themselves in both feet. They sold their souls to the devil and all they got were some lousy judges. In the short term that might make them feel good, in the long term with a new generation they will be the losers...

Hi anon...I would have liked to hear what Bernie had to say, but with Trump as President it was always going to be a reality TV show. I'm surprised Trump didn't put a red hat on and have the Republican mob start chanting "lock Mueller up!!"

Hi Steve....I knew L. Ron Hubbard had a lizard brain, but I had no idea that your brain wasn't bigger than his. Surely you are just too modest....🐉