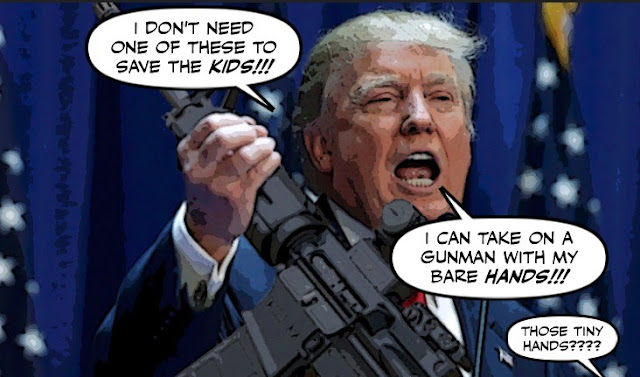 He talked up a storm after the Stoneman Douglas high school massacre. He talked about raising the age you can buy certain weapons. He said he wasn't afraid of the NRA.

But sadly Donald Trump WAS afraid of the NRA, and he folded like a cheap suit.

On Sunday night, Trump unveiled his proposal on guns in the wake of the Parkland, Florida, shooting that left 17 people dead. Guess what was left out of that proposal? Yup -- nothing on raising the age limit on the purchase of some types of weapons.

Claiming that his little hands are tied, when they are not. And that the public was against the idea, when in fact they favour it more than he does.

In a CNN/SSRS poll conducted late last month, 71% said they supported raising the age limit to 21 to buy any sort of gun -- a proposal that goes beyond even what Trump was advocating for in the open meeting he held with members of Congress on guns earlier this month.

So much for President Chicken. 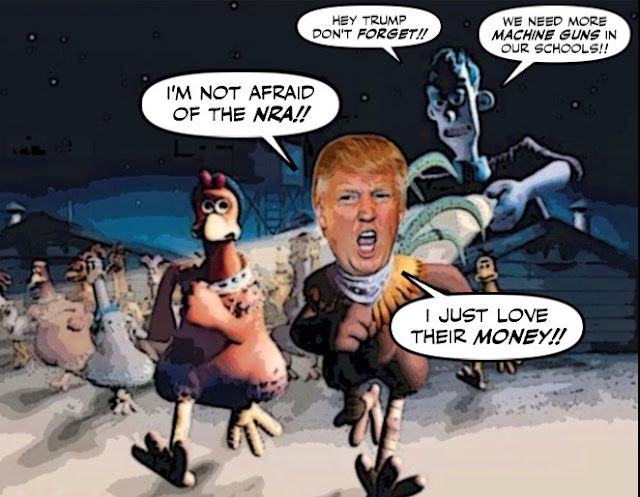 A coward if ever there was one.

And thank goodness for the young Americans who were out there yesterday on National Walkout Day, demanding more and better.

And a special thank you to the families of the murdered children of Dunblane, a small Scottish town near Glasgow, for their message of solidarity.

On the most poignant day of the year for us we wanted to reach out and offer our deepest and most heartfelt sympathy to you and your teachers and to all the families and friends of those who died at your school on 14th February.

Twenty-two years ago today our own lives were devastated when a gunman walked into Dunblane primary school in Scotland and shot dead sixteen 5- and 6-year-old children and their teacher and injured many more.

And their story of what it took to defeat the gun lobby.

Like you, we vowed to do something about it. We persuaded British lawmakers not to be swayed by the vested interests of the gun lobby, we asked them to put public safety first and to heed what the majority of the British people wanted. Most politicians listened and acted. Laws were changed, handguns were banned and the level of gun violence in Britain is now one of the lowest in the world. There have been no more school shootings.

So the children of Dunblane didn't die in vain. 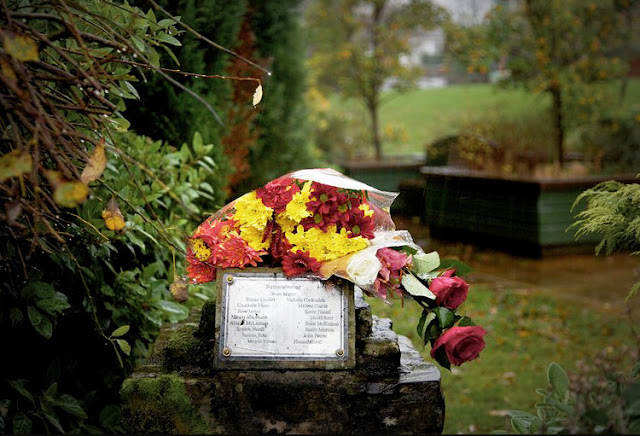 Could the same thing happened in America, the Land of the Gun?

It's hard to imagine.

But if anybody can do it, they can... 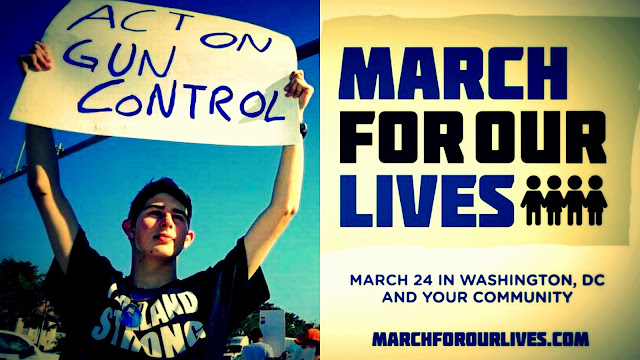 This is just the beginning.

Here comes the future and it's angry... 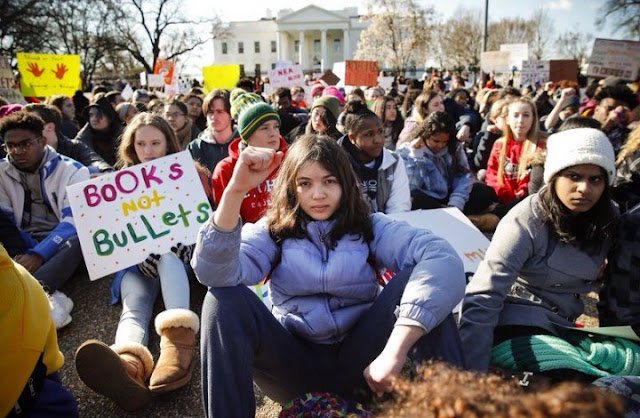 Attila the Trump! He seems to have as many concubines.

There are two lobbies you dont cross and live in America. Number one the NRA, Number two APAC. The CIA will have a new head who allegedly supervised and personally took part in torture. Torture that resulted in the subjects eyeball falling out. Nazi like torture. This women will be endorsed by APAC which IMHO will put them ahead of the NRA as the worst influence on America.

A few days ago a stuipd NRA bimbo told the media that their time was running out. When I look at the kids, I see the sand running out for the gun industry.

Thank you for this post Simon, I found it very inspiring. I was also very moved by that message from the survivors of that horrifying shooting in Dunblane. It does show though that when you get serious about gun control you can transform a society.

I think you meant AIPAC.

Every picture of the student shows kids the NRA is willing to have killed to fill their coffers and those of the gun manufactures. As soon as some right wing zealot murders some school kids, the vultures descend. Republican candidates, gun manufacturers, the NRA, they all use their PR people to see more guns and more memberships. I can't really express my contempt for the gun nuts polluting our society.

Yes, I meant the Netanyahoo people.

Hi rumleyfips...only the NRA would have the arrogance to tell the media that their time is running out, when a new generation is telling the gun lobby that they are the ones on the way out. Thanks to the hideous Second Amendment they have enjoyed God-like status for a long time, but pride comes before the fall...

hi anon@2:05 PM...thank you, I'm glad you liked the post. I have only vague memories of the Dunblane massacre, but as you can imagine it was a terrible shock in a small and peaceful country like Scotland. And every time I'm on a train that stops at Dunblane, I feel the sadness. But as I pointed out, from that tragedy came something good, and those poor little children and their teacher helped make the UK a safer place...

Hi rumleyfips...yes, I have always been horrified by that never-ending cycle of violence, and by the way the NRA uses tragedy to sell more memberships, and Americans rush out to buy more guns. The kids are inspiring, and I wish them all the luck in the world, but it's going to be a long. hard, and uphill struggle to end this madness...

Trump is a coward. he was too afraid to serve in the military, when he ought to have. He is still a coward, because he is afraid of the NRA and actually I think he is afraid of those kids. 8 million of them will be voting later this year, because they turn 18. He may want to pretend they don't count, but the only one who can't count is Trump. those 8 million also have friends who just might vote with them. Kids in the U.S.A. are sick and tired of having to practise "shooter drills". I'd never heard of them until this shooting. when we went to school all we had was fire drills.

those kids not only don't like Trump and those who vote to support the NRA, but many lost health care with the GOP. Then there is the no small matter of, all those kids, they know Dreamers. It might get messy for Trump and the GOP. all we can hope is the Dems. don't screw up with in fighting.

Trump is afraid of Stormy Daniels. He just hired the lawyer which brought Gawker down. He is afraid of McCabe and those like him, by having Session fire him without his pension. It sends a message to the American federal service. Don't tow the Trump line, we could fire you and you'd loose your pension.

Trump the coward, bully, idiot and totally unsuitable for the position.