Donald Trump and the Mad Bomber 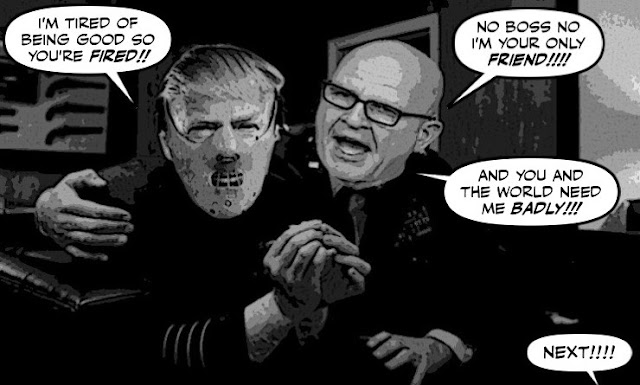 Well so much for the theory that Donald Trump could be controlled by saner men than him.

First he had his faithful minion, John Kelly, fire his Secretary of State Rex Tillerson, while he was on the toilet.

And maybe our last chance of surviving Trump's deranged presidency. 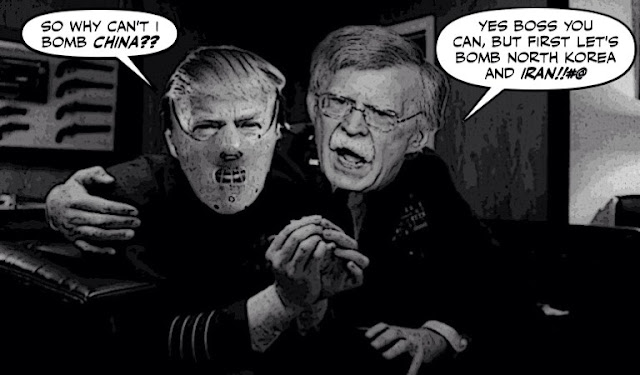 For McMaster's replacement, John Bolton, is known as the Mad Bomber.

President Trump named John R. Bolton, a hard-line former American ambassador to the United Nations, as his third national security adviser on Thursday, continuing a shake-up that creates one of the most hawkish national security teams of any White House in recent history.

He has never known a war he didn't like, and he really is that dangerous.

The good thing about John Bolton, President Trump’s new national security adviser, is that he says what he thinks. The bad thing is what he thinks. There are few people more likely than Mr. Bolton is to lead the country into war. His selection is a decision that is as alarming as any Mr. Trump has made so far.

He has argued for attacking North Korea to neutralize the threat of its nuclear weapons, which could set off a horrific war costing thousands of lives.

He not only wants to abrogate the six-party deal that, since 2015, has significantly limited Iran’s nuclear program, he called for bombing Iran instead.

And if you don't believe that, read Bolton's own words for yourself.

The inescapable conclusion is that Iran will not negotiate away its nuclear program. Nor will sanctions block its building a broad and deep weapons infrastructure. The inconvenient truth is that only military action like Israel’s 1981 attack on Saddam Hussein’s Osirak reactor in Iraq or its 2007 destruction of a Syrian reactor, designed and built by North Korea, can accomplish what is required. Time is terribly short, but a strike can still succeed.

And don't forget to spare a thought for all of Trump's idiot supporters who believed that Trump couldn't possibly be as dangerous as Hillary Clinton... 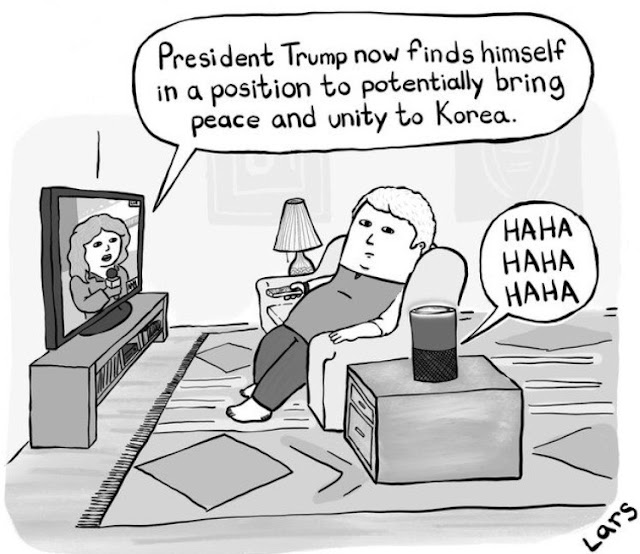 How would those dumb deplorables like their grits and/or their children served? 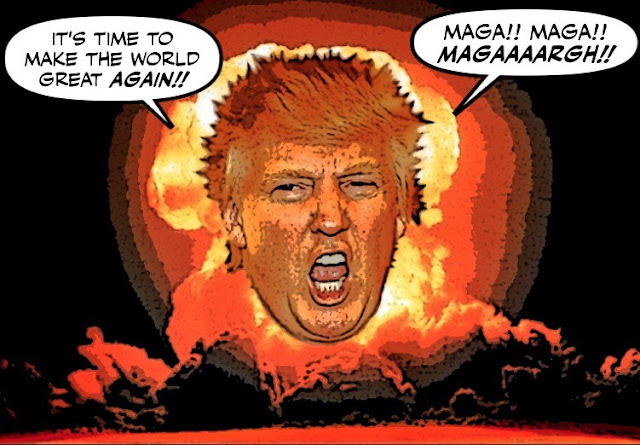 And yes, and I hate to say this, if Mueller or the Deep State can't save us.

Let's hope that Mother Nature can do what needs to be done.

And stop Trump as only she can... 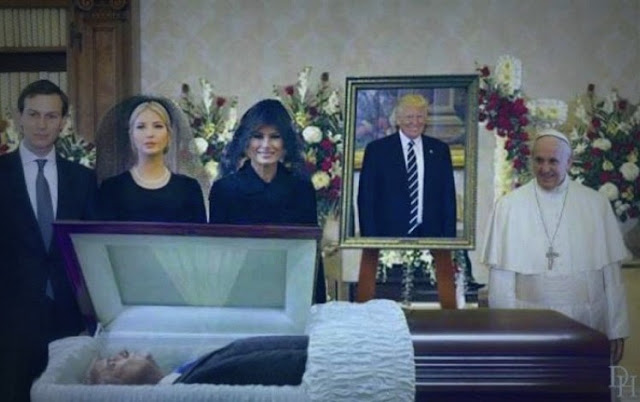 Before that dotard maniac goes down in flames.

And takes us all with him...

Labels: Donald Trump, General McMaster, John Bolton, The End of Everything, The Madness of Trump

Wow Simon! That last image is an eye opener. Powerful yet somewhat soothing. At least Melania and the Pope appear to be taking it well.
Whether Mueller, Mother Nature or KFC puts a stop to Trump matters not anymore as long as this reality based shit-show ends once and for all.
JD

You do not get deeper deep state than Bolton. America needed another 80 billion a year for the military like we need to fiance post media.

Like Pence is going to be so much better!!!

All of Trump's new cabinet appointments are Fox News panelists. He is literally turning his cabinet into a reality show. If we survive this gang it will be a miracle.

that is the medium and the message. Reality TV should have died first season but now it rules everthing and everybody wants to do it on facebook or instagram. We have moved to terminal stupid,],

In nature stresses build up slowly and then suddenly dissipate in a catastrophic earthquake or avalanche. Wonder if Trump is the messiah sent to suddenly transform the slowly building US economic and social stresses into a sudden avalanche. For years the US has been building a global empire partially financed by other countries who gave them consumables and credit which in turn allowed them to spend around 20% of their GDP in military expansion. Now the idiot in chief is saying "I want to make all that free stuff you were giving us at home and oh bye the way I am going to further expand the military budget at the same time".
Free stuff combined with military expansion was a productive strategy and over time the free stuff could have been replaced with robotics leaving the US in a very strong long term global position. Trump does not understand or care about the true sources of American power and will willfully destroy both the good and the bad to fuel his own narcissistic ego which is all bad. A few major global missteps resulting in loss of confidence and poof a mediocre feudal Trumpland with its deep moats and high walls becomes the best case reality.
RT

I will take Trump over Pence anyday. The political future in the USA looks hopeless. You would not believe how many former CIA and other alphabet people are running for Congress as Democrats. The USA is moving rapidly to Deep State rule above and below.

hi JD...yes, I especially love the big smiles on the faces of Melania and the Pope. And I don't blame them. What a happy scene that would be. Although before I started celebrating I would have to pay someone to stick a pin into the Orange Oaf to make sure he's really dead. I can't believe how dangerous he has made the world, and I live for the day he is made to pay for his disgraceful behaviour...

hi Steve...I think I've told you what I think about Pence. He may be a scary religious fanatic and a disgusting anti-gay bigot, but he doesn't appear to be a maniac like Trump. And at this point, with the survival of the world at stake, that's all that counts...

hi Steve...I cannot remember time when we were so close to a conflict that could lead to a nuclear war. I never felt that way when Obama was president, so there is a difference. And Trump is without the shadow of a doubt, the most dangerous president I have ever known...

hi anon@6:53 PM...I've noticed that he seems to be trying to turn his cabinet into a talk show like Fox and Friends. I don't get Fox so I can only imagine what that might look like, but it is the lowest denominator, and not the kind of cabinet we need if we are going to tackle some of the other things threatening our survival. With those Cro Magnons we don't stand a chance...

Hi RT...I'm a pretty optimistic person, but I have to admit I can only see trouble ahead. The main problem as I see it is that Trump is trying to bully countries into signing favourable deals for him and the U.S., but when he comes up against countries like China or North Korea he risks provoking them into making some kind of military response which could quickly escalate out of control. Trump seems to think he now knows how to be president, and doesn't need anybody to tell him what to do. When in fact he has the attention span of a gnat, and needs all the help he can get...