Lisa Raitt and the Con Losers 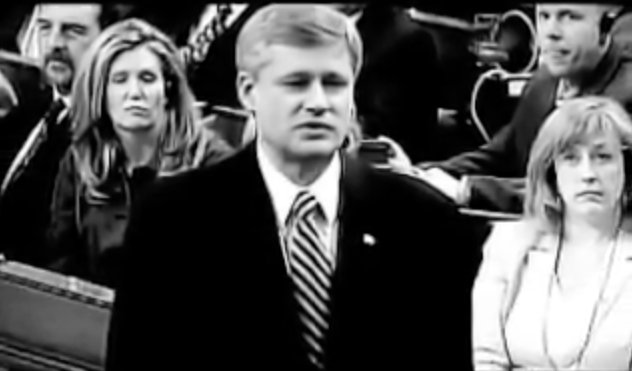 Nine years ago I made a short YouTube video called Lisa and the Losers. And I must say Lisa Raitt hasn't changed a bit.

She's on another losing streak, and it could be her worst.

First she lost the race to replace Stephen Harper. Who she had tried so hard to impress.

Then she lost her chance to run for the leadership of the Ontario PC party.

So she became co-chair of the Caroline Mulroney campaign, only to lose AGAIN !!!!

And now, sadly, she may be losing control of herself. 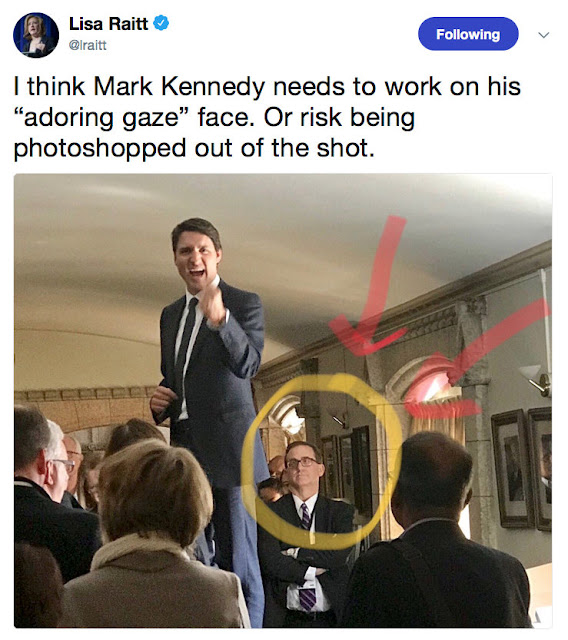 For what else can explain the aggressive and very rude way she went after Mark Kennedy, the Liberal House Leader's Communications Director?

And then, as if that wasn't bad enough, what else can explain the way she went after poor Bill Morneau, first accusing him of trying to buy votes.

"Aren't you just buying votes, minister? Isn't that what this whole budget is about?" Raitt demanded.

And then accusing him of calling her a "neanderthal." 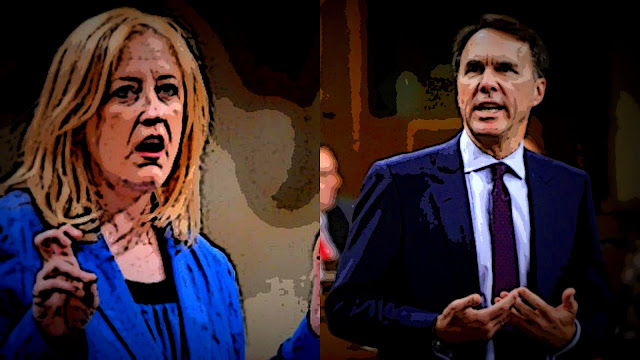 "I actually find your line of questioning to be offensive," he said, adding that he and the government "absolutely believe" that promoting women into positions of leadership is a key to a successful economy.

"We will drag along the Neanderthals who don't agree with that and that will be our continuing approach," he added, in apparent reference to Conservatives.

"I'm not a Neanderthal," retorted Raitt.

Even though he hadn't.

Only to make herself AND her leader Andrew Scheer look like idiots.

Especially since Scheer used the occasion to go after the CBC, for not reporting what hadn't happened.

But of course, Raitt's record as a loser goes back almost a decade, when as Minister of Natural Resources in ONE week in June 2009 she was asked to resign for TWO different reasons.

And blaming her young aide instead of herself... 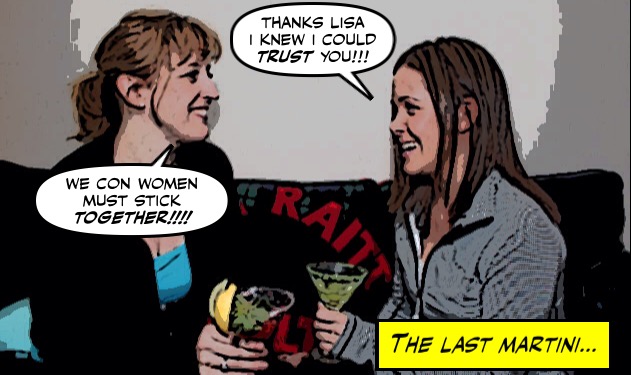 And then only five days later, being asked to resign again.

After being caught trying to make political hay out of a shutdown at the Chalk River nuclear facility, which had caused a critical shortage of medical isotopes.

Natural Resources Minister Lisa Raitt is again at the heart of a raging controversy after she disparaged Health Minister Leona Aglukkaq and called the medical isotope shortage a "sexy" issue on a newly unsealed audio tape.

On the tape, Raitt said the medical isotope shortage has been a difficult political issue "because it's confusing to a lot of people." However, Raitt added: "But it's sexy ... Radioactive leaks. Cancer."

Which as I reported at the time had cancer victims and others all over the country calling for her dismissal in the name of human decency.

And is when I made this tape to try to get her to do the right thing...

She didn't of course, she never does.

But did you notice the "adoring gaze" she had for Harper?

Life is ironic isn't it?

But Lisa is still a loser. She is clearly losing control of herself.

And the sooner she retires the better...

That's a fantastic video. You need to start making more of them.

Simon, what do you call Raitt after her 5th martini? The leaning tower of Lisa.
But seriously, I wouldn't call her a Neanderthal, a hag yes, Neanderthal no. Lisa's having a hell of a time making a name for herself and has no one to blame but herself. How she kept her seat in the last election is beyond me but fortunately for us that's as far as she goes. As for her former aide, I hear she's doing a bang up job as an exhaust technician for a bus company.
The image of Lisa looking at Harper could be seen as a loving gaze but what I see is a subservient Harper underling who is petrified by the tyrant and is exactly how Harper liked to keep his MP's. Con "democracy" at its best.
I totally agree that she should retire Simon. Maybe she and Gerry Ritz could hook up and share a few gaffes. Gerry can have some 2 week old salami while chortling about his "death by a thousand cuts, cold cuts that is" sick joke during the listeriosis crisis and Lisa, in her waning years, may find out for real just how sexy cancer is.
JD

I don't know what has come over Raiit, she used to be considered a member of the Con's "moderate" wing. I guess she has finally realized that in Scheer's alt-right party "moderate" will get her nowhere. Now she's just another Con hand maid, and I think that is why she is so frustrated. What's left of her reputation is shot, and the situation is only going to get worse.

The adoring look on Lisa's face certainly brings back not so fond memories of the Harper Con solution to all problems by either buying loyalty, blaming followed by firing or privatizing. They certainly ran the gambit on the nuclear portfolio. First they knee capped the Nuclear Safety Act by firing the watchdog and then selling public sector reactor and maintenance responsibility to a company facing international and domestic charges for corruption. But then again all is well that ends well and except for the odd rumblings about plans to bury nuclear waste within a mile of the lake Huron shoreline all is quiet. Any nagging feeling that perhaps privatization weakened and somehow corrupted federal regulatory expertise is probably unfounded. I am sure that even slightly corrupt capitalistic companies put public safety first over profits.
RT

Nice subtle homophobia with the "adoring gaze" tweet. All the cons ever do is accuse Trudeau cabinet members and supporters of crushing on him, instead of finding much to respect in his leadership qualities and "attractive" policy agenda. Wonder what she thinks of Donnie Dotard, who admitted to making stuff up in his idiotic bluster about NAFTA and couldn't stop referring to Justin as "a young guy, real handsome, good-looking guy." Projection much?

Does Lisa talk just to hear her own voice? Obviously she has nothing really worth saying, certainly not as a valid opposition argument. You'd think she'd recognize that Morneau is, in a general sense, on her side. I mean, he said that the Trudeau government supports promoting women to positions of decision-making power. You know, like... members of Parliament? Earth to Lisa, that's you, while Scheer Furor just wants them at home chained to the radiator and popping out Lebensborn babies for the survival of the Authoritarian Disaster Race. If Lisa doesn't like having a job, let her step aside in favor of someone who does. But don't force her choice on other women who do like working and do want to break the glass ceiling.

Oh, and for that Schithead to accuse the CBC of "covering for Trudeau" is the most laughable and yet rage-inducing form of hypocrisy yet. They've been turning nothingburgers into Dagwood sandwiches for two years -- Fidel who? -- while giving Android Sneer and his low-rent Analytica project a free pass. If anyone has an adoring gaze it's the Conrad Black Channel, for their dark messiah they hope will send plenty of undeserved tithes the way of their morally and financially bankrupt former employer. Lying by omission: so easy a caveman could do it.

hi anon...thank you, I'm glad you liked the video, but I was just learning how to make them back then, and I can barely watch them these days without wincing with embarrassment. But you're right about one thing, all progressives need to make more videos, because we are being flooded with Con ones, and we need to start countering them before they spread even more fake news....

hi JD...I would hate to encounter Raitt after her fifth martini, for her behaviour is already bestial enough. I can't believe how rude and aggressive she has become, and it infuriates me to see her twist Morneau's words to make it look like he's the bully and she's the victim, when it's exactly the opposite. I'm willing to cut her some slack because her partner is apparently suffering from the first symptoms of dementia, and I feel sorry for her. But that doesn't excuse her aggressive behaviour, and if she can't control herself she should do the right thing and retire...

hi anon@3:59 PM...you're right, that probably does help explain why Raitt seems to be taking out her frustration on others. She was probably hoping that in a party of right-wing extremists being a "moderate" would set her apart from the others. But unfortunately for her in Scheer's party being a moderate can only marginalize her, and now she's bitter. But she should have seen it coming, and she shouldn't be surprised...

Hi RT...yes, I thought it was ironic that she should blast Mark Kennedy for his "adoring gaze," when the adoring look on her face is enough to stop a train. I should also disclose that Raitt once headed the Port Authority, with controls the water front in the place where I live. And that her term in office was an absolute disaster. From her Wikipedia page:

As CEO of the TPA, Raitt was responsible for building the International Marine Passenger Terminal, a Toronto home for the now-defunct Canadian American Transportation Systems, a Rochester, New York-based group. The ground was broken on 24 August 2004, and CATS operated for six months in 2005.[15] The Rochester firm that initially owned the ferry had a 14-year lease on the use of the terminal that would have paid the City of Toronto $250,000 per year.[15] [16] The terminal was reported to have cost $10.5 million to construct,[17] which makes a 0.33 cost recovery factor. The lease was terminated in December 2009 after payment of a $90,000 settlement. The terminal has seen little use since then except to dock cruise ships and as a movie set.
So I get to stare at her failure, or her white elephant, every day of my life.
Her day is done, and she should retire before she makes an even bigger fool of herself...

hi Jackie...As I said above, I simply can't understand why Raitt went after poor Mark Kennedy in such a disgusting manner. It's rude, it's childish, and along with other things makes me wonder whether she's on the verge of a nervous breakdown. The Cons have already degraded our parliament so much, that kind of behaviour is the last thing we need. And whatever anyone thinks of Morneau, he is a classy man who has managed to restrain himself despite all the vicious attacks he has had to endure for months, so he doesn't deserve to be treated like that. And yes, for Schmear to accuse the CBC of being biased from not reporting what never happened is the absolute limit.
Especially since their Con bias couldn't be more pronounced. The Cons are mounting a classic alt right/fake news assault on this country and they need to be stopped before they fool more Canadians...

Simon, I refuse to cut her any slack for anyone who would make such an asinine comment about cancer deserves no sympathy at all. I mean, who says shit like that? My mother was dying of cancer at the time so it hit pretty close to home for me.
JD