Will the Con Leadership Race Help Destroy the Harper Party? 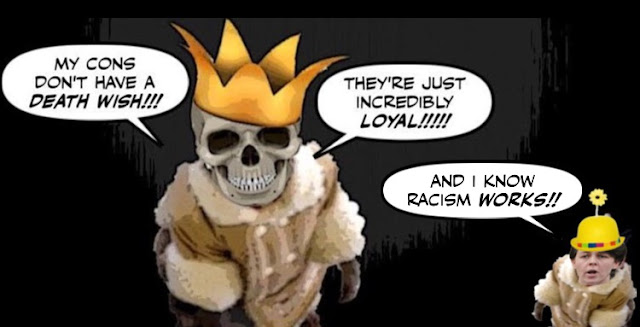 Yesterday I ran a Michael Harris column that looked at the Cons apparent death wish.

And how they seemed unable to escape the deathly legacy of Stephen Harper.

And I also wondered how Rona Ambrose's decision to criticize Kellie Leitch for her demagogic proposal to screen immigrants for "anti-Canadian values,"would affect Ambrose's leadership.

And her ability to hold her party together. 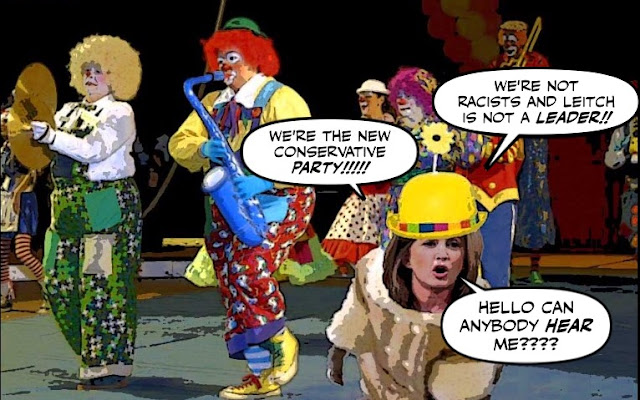 But while old Con hacks like Lorrie Goldstein are already screaming hysterically about how the Cons are self destructing.

While Prime Minister Justin Trudeau and the Liberals soar in the opinion polls, the Tories are hurling themselves into the black hole of political irrelevancy by turning on each other and pretending to be Liberals.

For apparently imitating the Liberals, daring to criticize Leitch, and not being racist enough.

Not only has Interim Tory Leader Rona Ambrose condemned the idea -- thus displaying bias in a leadership race in which she should be neutral -- but fellow leadership contender Michael Chong has accused Leitch of “dog-whistle politics”.

And all but accusing Rona Ambrose of being a traitor, an idiot, or a Liberal... 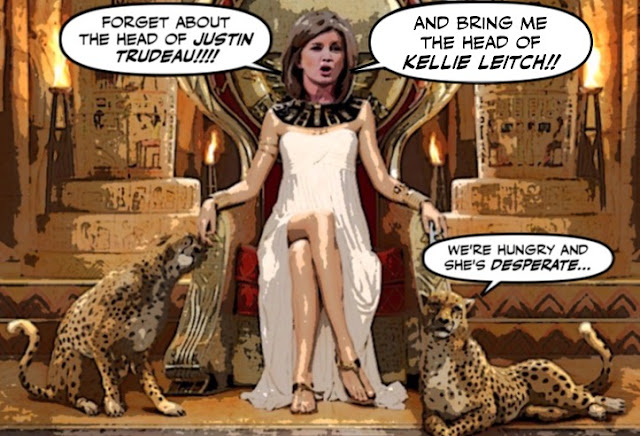 How does a Conservative party that wants to be taken seriously as an alternative to Trudeau and the Liberals come up with a position this stupid?

The more serious and far more interesting question is whether the Con leadership race will re-open old wounds, and cause a possibly fatal division.

By splitting the Harper Party, like an amoeba, into its component parts... 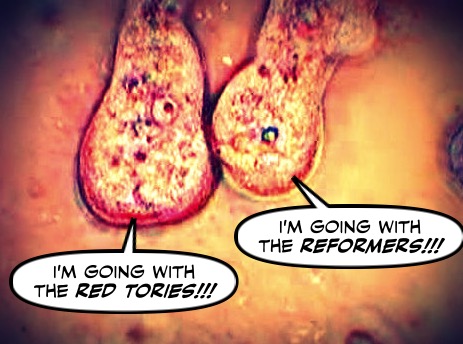 Or fracturing it beyond recognition.

“The fractures going on in the party (are) very real,” said Justin Burton, a 30-year-old Conservative Party member and founder of a think tank called Future. CPC. Leaders., which aims to connect young conservatives with Tory MPs.

With the first crack appearing at the recent heated debate over whether to allow gay marriage. Eleven years after it became law.

“It’s a scary time when we start hearing things like that … it almost felt like we were moving backwards instead of forwards,” Burton said. “It almost makes you feel like you’re turning into a fractured party again over these types of issues.”

Which hints at the trouble to come, and is only made worse by the fact that none of the Con candidates so far has the ability to straddle the Great Divide and unite the warring factions. 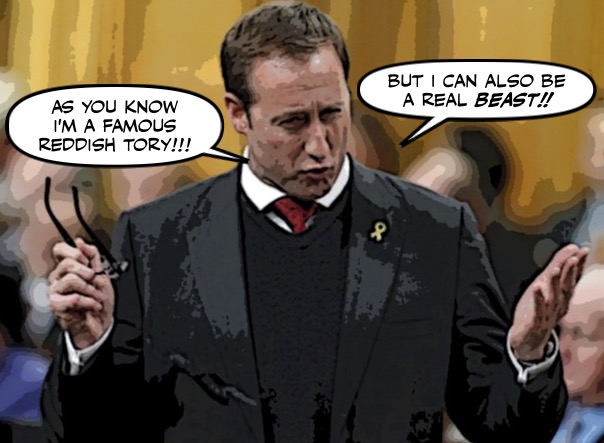 As only Dumbo could.

And all the candidates are so mediocre none of them can even dream of defeating Justin Trudeau.

Which makes what Rona Ambrose is busy doing these days even more amusing... 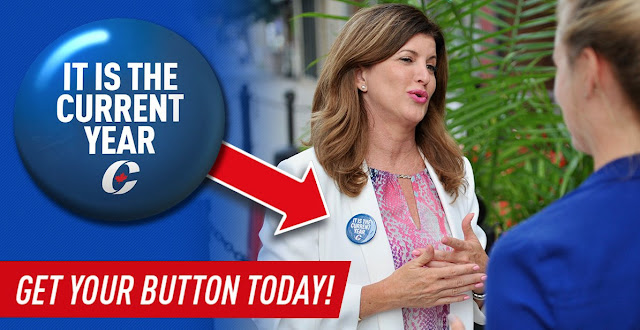 Drawing attention to a button she is wearing.

And then flogging it to make money... 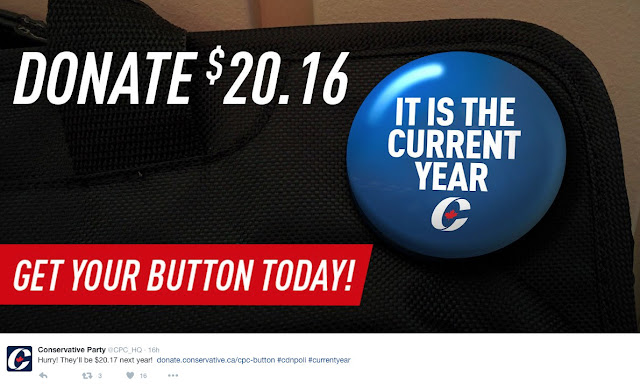 Even though the Cons can't be sure whether they'll be one party or two by the end of 2017.

And of course the main reason the Cons are threatening to come apart is that to make one party out of two parties Stephen Harper had to make it HIS party.

Which worked for a while, until it didn't.

And now that he's gone only a miracle can save it... 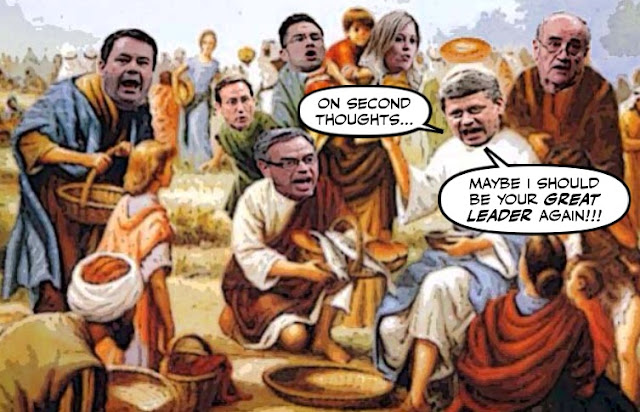 And that's NOT going to happen. 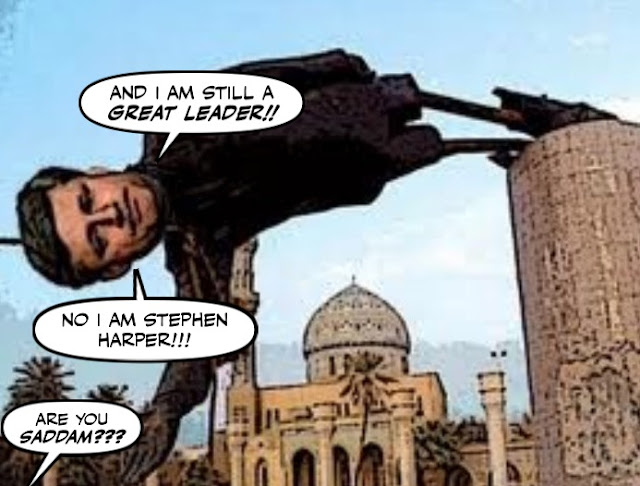 Great Leader made the Cons in his ugly image.

And with a little bit of luck he'll take them down with him...

Lorrie Goldstein “…Kellie Leitch’s logical proposal that immigrants to Canada should be screened for “anti-Canadian values".

Great idea but just who decides what an “anti-Canadian value” is?

It's a bit like me trying to describe what Canadian cuisine is to my friends in France. Um, pizza, boiled potatoes, dim sum, butter tarts …

The Canadian values espoused by my grandfather in 1900 are not likely the same as mine today. And, in part, they have changed due to new immigrants bringing new ideas to Canada.

Goldstein is firmly endorsing racism and prejudice as key principles of the Conservative Party.

Suddenly, the Conservative party that insisted throughout last year’s election campaign that Muslim women who wear the niqab should have to remove it when taking the oath of citizenship because, in the words of then immigration minister Jason Kenney, when he introduced the policy in 2011: “It is a matter of deep principle that goes to the heart of our identity and our values of openness and equality”, has lost its mind.

It is a key principle of the Cons that one cannot wear one's usual clothes? Didn't we have that fight over Sikh turbans two or three or four decades ago?

Kenney should just have insisted that all participants in a citizenship ceremony must wear only speedos and flip-flops.

It was Jason Kenney and, presumably, Harper who lost their minds. Or more likely, just let their bigotry show a bit more than usual.

.. ergh, Simon .. the noyz from the Harper Rump.. is stupefying.. If not coming from unpaid 9 yr old interns conscripted from U of Western Ont Poli Sci outreach or Mississippi extended doctorate bible college in 12 weeks! .. we are left aghast, considering the message from on high is possibly & divinely direct from Arthur last breath Hamilton? Her royal highness Rona? Ray Novak channeling Stevie via Rona.. hell, Nick Kouvalis moonlighting?

hi jrkrideau...well needless to say I agree with you, but I should have pointed out that old Lorrie is the racist hack who wrote this story:

Where he suggested the Tamil boat people should be stopped by force. And that "lock and load would be our approach."

Which tells us all we need to know about him, and his anti-Canadian values.

Which also goes for all the Cons who would conjure up bigotry to try to divide Canadians all over again...

hi salamander...at this point I don't know who is channelling who, but it is like some ghastly high school reunion. And all the old monsters are coming out of the woodwork. Leitch's blatant attempt to stir up nativism and xenophobia is simply outrageous, and she must be taught a lesson she will never forget....