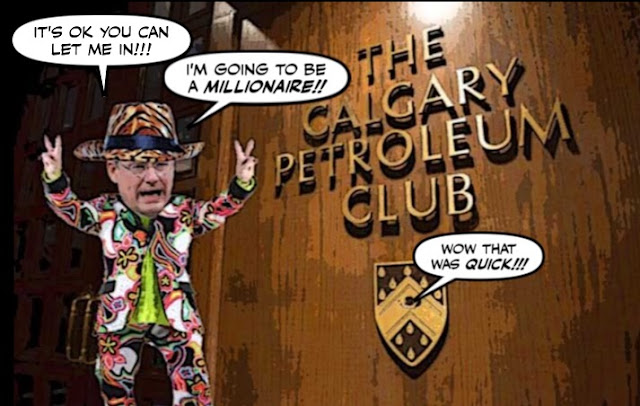 As you may have heard, Stephen Harper is finally gainfully employed again, after getting paid to do nothing for so long.

And although he hasn't yet asked Big Oil for a job, he's clearly got plans to become a very rich man.

For not only does he have his own consulting business, he has joined Dentons the world's largest law firm.

Which as you can see has made him very, very, happy.


Because there is nothing he enjoys more than selling himself like a used car salesman.

And although I can't help feeling that Dentons is getting less than it imagines.

“Dentons’ clients will benefit immeasurably from Mr. Harper’s exceptional skills and experience with getting deals done at the critical intersection of business, government and cross-border relations,” the firm’s global chairman, Joseph Andrew, said in a statement.

Because if Harper had "exceptional skills" I never noticed them.

But then Dentons' clients include the Chinese Communist Party, so I'm sure he'll be good for something... 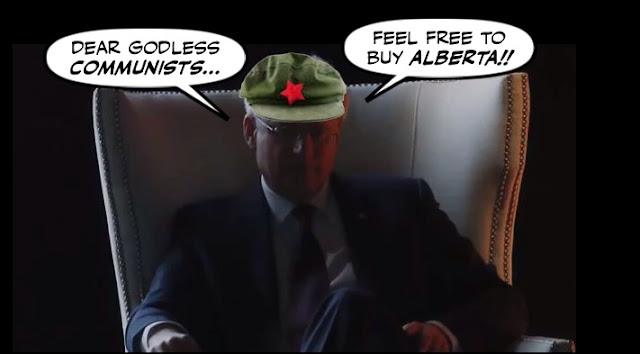 Considering how faithfully he served China's interests during his term in office.

But that's not all. Harper is also joining the board of the giant real estate company Colliers International.

“I am looking forward to working with Colliers to further its growth in global markets, capitalize on its leadership position in the commercial real estate services sector, and continue its proven track record of building value for shareholders.”

Which does surprise me, considering how he ran Canada's economy into the ground...

While posing as a Great Economist Leader.

And as if that isn't enough, Harper is also jumping into the international speaking circuit.

Which I also find shocking, not only because his biography couldn't be more flattering.

But also because I can't forget the day he tried out his speaking skills at the United Nations... 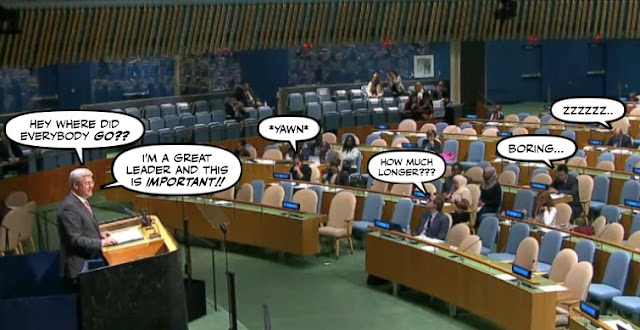 Only to find himself addressing more chairs than people.

But then Harper is not leaving anything to chance. And was recently spotted running around in the woods, bonding with the rich and the powerful, at the all-male Bohemian Grove.

For those who don't know, the Bohemian Grove is an annual event in California that the Washington Post described in a 2011 article as "two weeks of heavy-drinking, super-secret talks, druid worship and other rituals" by some of the richest and most powerful men in the world.

And I only hope that those Druid worship ceremonies had Great Fallen Leader beating a drum, or his chest, and running around half naked... 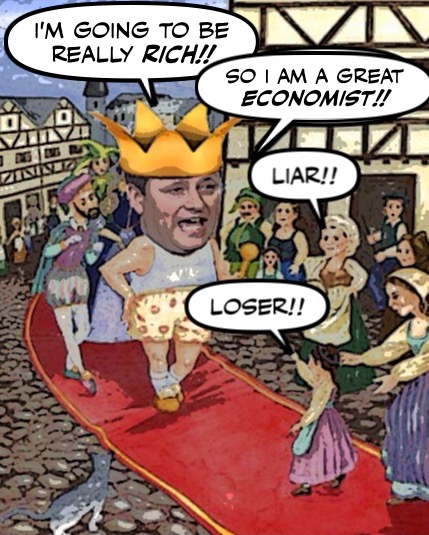 So everybody could see that the mad emperor is still trying to con people into thinking he was a Great Leader, instead of the worst Prime Minister this country has ever known.

And is now peddling that phony reputation to the highest bidder...

But yes, this is the bottom line:

There was all that talk about how Harper might try to redeem himself by setting up a foundation to help poor women and children.

But in the end he just went for the money, the moolah, the big bucks.

And now seems only interested in making himself and his faithful boyservant Ray Novak very very rich... 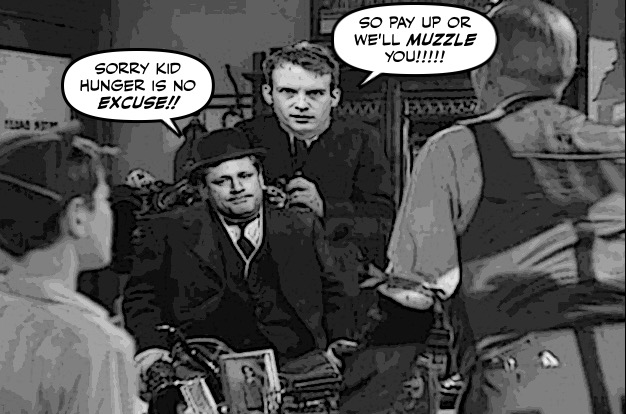 And all I can say is, may the Great Polar Bear God of the Great White North protect their victims.

Thank goodness we're not living anymore, in the country he almost ruined... 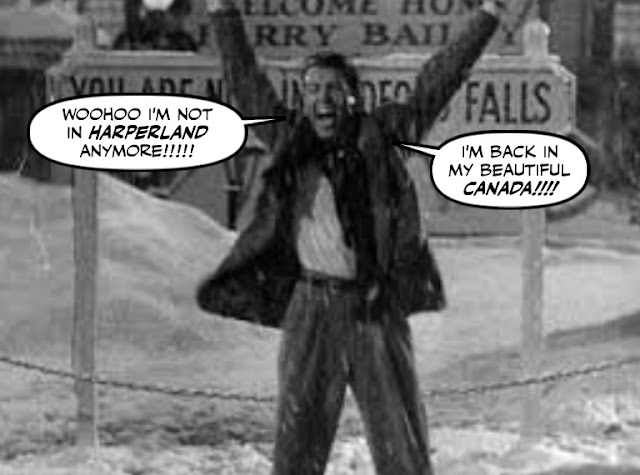 And of course, add another grubby chapter to the sordid story of Stephen Harper...

I can't help feeling that Dentons is getting less than it imagines.

Or more than they bargained for?

There seemed to be a fairly loud sigh of relief from a lot of countries, or, at least, many politicians and diplomats from said countries when he was defeated. Harper is more likely to be a pariah in many places rather than the “respected senior statesman” he pretends to be.

Re the Communist Party of China, I suspect that they think him a useful fool/tool but I don't think that they have forgiven him for his human rights speech in Beijing early his first term in office.

Insulting your hosts, with, IIRC, the primer of China standing beside you while you are on a visit to said country is not exactly enduring. It was outstandingly stupid which tends to describe about 99% of Harper's foreign policy.

I wonder, too, if it is not the money so much as some recognition that he is still an “important person” after, not only losing the election, but, to figuratively have many citizens dancing in the streets and singing “the wicked witch is dead”.

Pissing off the customers, thats going to be his area of expertise.

1. does anyone ever remember harper sustaining a smile for the length of this prostitutive video? he shouldn't do that - it's totally out of character and it's creepy. just saying.

2. some of harper's lexico-grammatical choices are lame (whether his inconsistent use of gerund verb-form or his insistence on using the word 'proven' - WTFisupwiththat? pessimism that lends a political candidate the eyes to see things as finite and determined should be one of the first disqualifying criteria during an election from now on. you are right, simon: used car dealer language. some choices are, however, quite informative: "...capitalize on its leadership position..." ah... well... at least he's not beating around the bush...

3. dentons is a law firm with its fingers in every country, at the service of public policy and regulation as well as finance and banking institutions (i.e IMF).

sum up: stevie, with his winning smile, will linguistically stumble and blunder in public, about important things. wow! did he not fail on all those? did he not just get fired by at least 30 million people for not having what it takes to lead? and dentons is fine with letting him capitalize on its leadership position? well, 'failure' must be a determining hiring criterion at dentons, then.

Actually Simon... I have always taken great exception to his 'skills'.

Yes , Harper might be useful as a foot stool.

hi jrkrideau...yes, it's possible that Harper is hoping that by making a lot of money he can build himself up, after his humiliating defeat. And you're also probably right that Harper will probably not be much use to Dentons. But then they collect world leaders like figurines, and Harper will be the smallest plaster figure, and the one made in China...

hi Steve...I wish I could be a fly on the wall, and watch Harper and Novak trying to sell themselves. For sadly for them, in the business world, the customer is always right. And I'm pretty sure their little venture will end as disastrously as the last one...

hi Luce...I'm glad you noticed that ghastly smile, for it creeped me out too. Until I burst into laughter. But yes, he is shamelessly trying to sell his phony reputation. And I wouldn't be surprised that after a very short time, all those who hire him will fire him like we did...

hi Bill...well I must say I'm shocked. Surely you must give him some credit for his piano playing "skills" even if he wailed like a banshee, or croaked like a frog. How many Prime Ministers could do that? And take that Justin Trudeau... ;)

NOTE: I hate to repeat myself, but I must remind readers that this comment space is reserved for progressives. Any comments from Cons will be deleted upon arrival, and will not be published. And any vile or violent ones whether they come from some trade school in Port Coquitlam, or the back of some basilica, will be logged and tracked down by my crack security team, who are considerably rougher and less patient than I am. I promised to make this a clean and Con free zone for progressives to share their views freely, and that is what it will remain.

Thank you Simon for making this a con free, and crazy free space :)

I guess our scum-bag capitalist masters really will see to it that this talentless, anti-democratic hack and coward is compensated for his loyal service against the best interests of the majority of Canadians.

What a sick system.