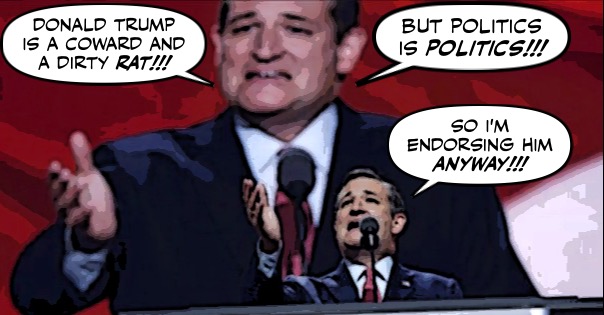 Let it never be said that Ted Cruz holds a grudge for long. Or that he will let anything get in the way of his feverish desire to be President.

Not even what's left of his dignity, his father's good name, or his wife's honour.

For after having called Donald Trump every dirty word in the book, and claiming he'd have to be a "servile puppy" to endorse him

Big Ted has rolled over like a lap dog and endorsed him anyway. 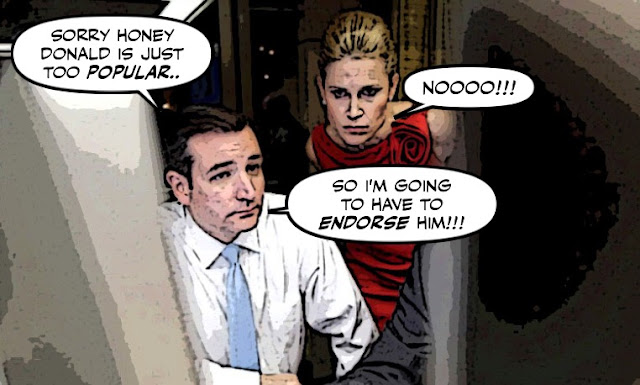 And yes it is craven and it is stunning.

Ted Cruz set aside his many differences with Donald Trump on Friday to endorse for president a man whom he once called a “serial philanderer,” a “pathological liar,” “utterly amoral,” and a “sniveling coward”; who insulted his wife’s looks; who insinuated Cruz’s father was involved in the assassination of John F. Kennedy; who said he wouldn’t even accept his endorsement; and who for months mocked him mercilessly with a schoolyard taunt, “Lyin’ Ted.”

But then it seems Cruz had no choice. It was either his wife and his word, or his Senate seat.

Cruz is facing a potentially difficult primary battle in his reelection bid for the Senate in 2018, and he undoubtedly determined that he needed to make amends with the sizable contingent of Trump supporters in Texas—especially knowing that he can’t count on the support of party leaders he has long since alienated.

And he wasn't the only one to break his word.

Two months and one day ago, Trump said point-blank regarding the possibility of a Cruz endorsement: “If he gives it, I will not accept it.” By Friday, he apparently changed his mind. “I am greatly honored by the endorsement of Senator Cruz,” Trump said in response.

So the two do deserve each other.

One can only hope that Heidi Cruz feels the same way... 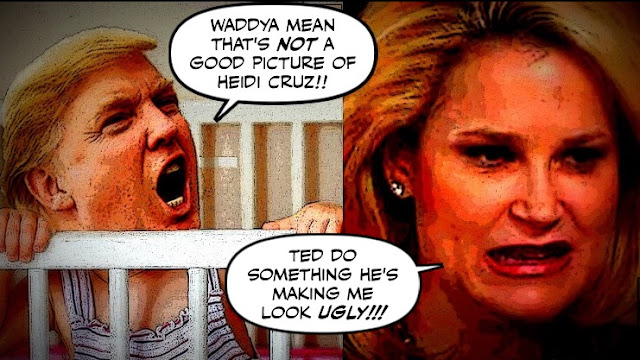 And as Ambrose Pierce writes, in this campaign from Hell, we finally do have something to laugh about.

In a year in which the entire Republican Party demonstrated time after time that it has the collective backbone of pond algae and all the intellectual integrity of a flesh-eating virus, on Friday, we may well have reached Peak Sellout.

Not since 2008, when John McCain sucked up to the same forces that had soaked his young daughter in calumny four years earlier, have we seen such an abject spasm of hilarious self-abnegation as we saw from Tailgunner Ted Cruz, fearless fighter for the Constitution, dauntless soldier of the living Christ, and marshmallow-spined careerist.

There hasn't been much to laugh about in this godforsaken campaign, but I'm rolling on the floor over this one. What an absolute coward. What a comic fraction of a statesman. What a pocket-sized imitation of a United States Senator.

Unless of course, Big Ted's spectacular flip flop reminds people again that he was born in Canada... 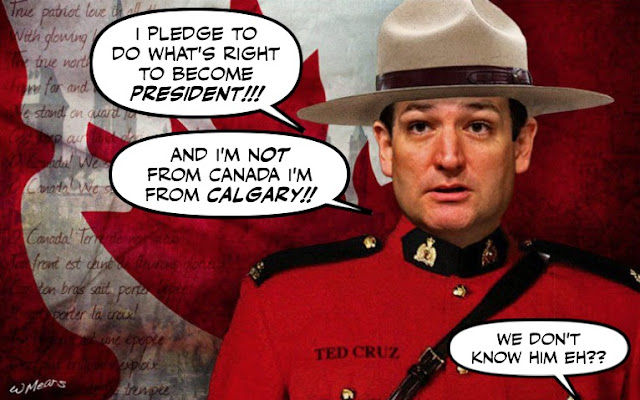 And then we'll all be embarrassed.

But seriously, they really are Republican clowns. Their proclaimed principles and their promises mean nothing. They don't give a damn about the honour or the rights of women. They are all misogynists.

The way the Trump organization is alleged to have treated some of its very young models is scandalous.

Not just by having them work illegally, like all those Mexicans he wants to deport. 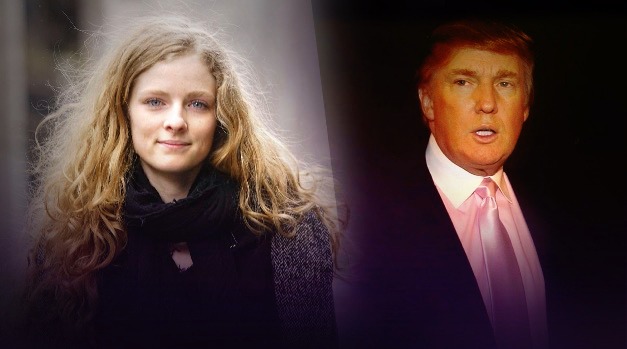 Some models told Mother Jones that they made little money because of high fees that Trump Model Management charged them for housing and other expenses.

Of working for the agency, one Canadian-born model said, "it is like modern-day slavery."

And in that regard I have to say that I thought this latest ad by Hillary Clinton is really powerful...

The young women of America do deserve better, and so do all its other decent citizens.

Ted Cruz is a servile puppy puppet of Donald Trump.

And they all must be defeated...

I would not want that thing as a leader of my country. I am not sure I'd want it for a leader of the rat living the neigbkour's cat is currently stalking.

BTW perhaps a bit off topic but an stunning piece of wild prejudice publisher a few years ago in Foreign Affairs, which apparently is a "respectable" journal by US standards.It is written by a founder of the journal who is/was a faculty member at Harvard, not David Duke. Of course he may just have "gone emeritus". It happens.

Apparently if you do not subscribe to the "distinct Anglo-Protestant culture of the founding settlers" you are not really an American. One wonders if Alexander or Leitch have been reading this kind of dreck?

hi David...the good news is that many of Ted Cruz's followers feel betrayed by what he has done, and are abandoning him in droves. So he won't be a threat in the next presidential election. He underestimated Trump, but then so did so many others....