Bernie Sanders Sets Out To Save Hillary Clinton 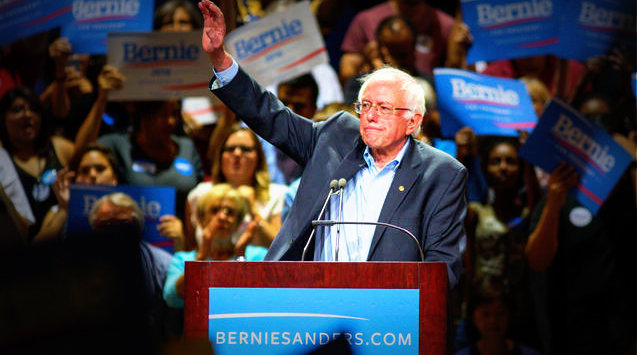 As we all know Bernie Sanders was treated unfairly by Hillary Clinton and the Democratic Party establishment.

And he has every right to be bitter.

But with the shadow of the fascist Trump looming over America.

Bernie is hitting the campaign trail and urging his supporters to vote for Hillary.


I have 7 beautiful grandchildren and 4 kids. I do not want Donald Trump to be their president. pic.twitter.com/cXIoq1n5Po
— Bernie Sanders (@BernieSanders) September 17, 2016


As if their lives depended on it. And for very good reason.

Some of his millennial supporters are threatening to vote for third parties.

A wide range of polls have found Clinton losing votes to Libertarian Party presidential nominee Gary Johnson and Green Party nominee Jill Stein. A new CBS-YouGov poll of Ohio showed Clinton winning voters under 30 by 32 points. But that amounted to just 51 percent of the millennial vote and represented a six-point decline since the summer.

Threatening to vote for the Green Party's Jill Stein who believes Clinton is a greater threat than Trump. 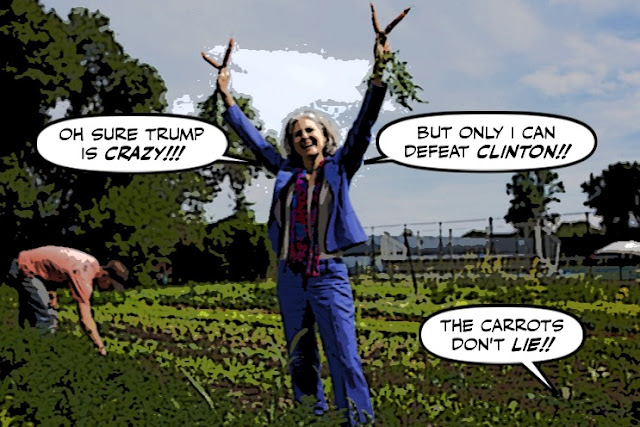 While she describes Trump as a danger she also believes he’s nothing more than a moron who has destroyed the GOP. Clinton, on the other hand, she considers a greater threat.

“Donald Trump, I think, will have a lot of trouble moving things through Congress,” Stein says. “Hillary Clinton, on the other hand, won’t … Hillary has the potential to do a whole lot more damage, get us into more wars, faster to pass her fracking disastrous climate program, much more easily than Donald Trump could do his.”

Even though Trump is a rabid climate change denier who believes that global warming is a hoax. And so much for the Green Party.

While other Sanders' supporters are threatening to waste their votes on the Libertarian Party candidate Gary Johnson. 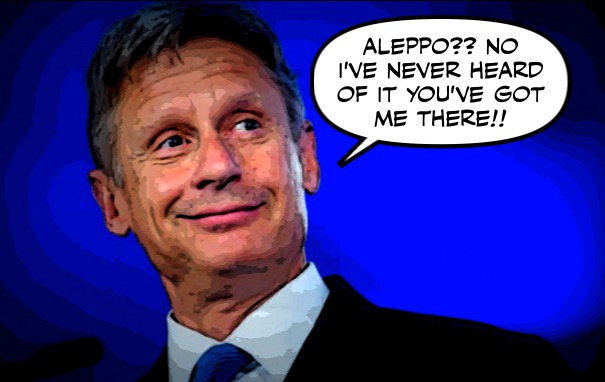 Gary Johnson, the Libertarian Party presidential candidate, who has struggled in recent weeks to recover from a gaffe in which he was unable to identify Aleppo, in war-torn Syria, appeared to fumble once more on Sunday when he said no one had been injured in two violent events in New York City and Minnesota over the weekend.

Former New Mexico governor Gary Johnson has emphasized his support for marijuana legalization and touts an anti-war stance in an attempt to lure progressives to his cause. But progressives are likely less aware of his links to the radical right and the Koch brothers, as well as his billionaire-coddling tax policies. 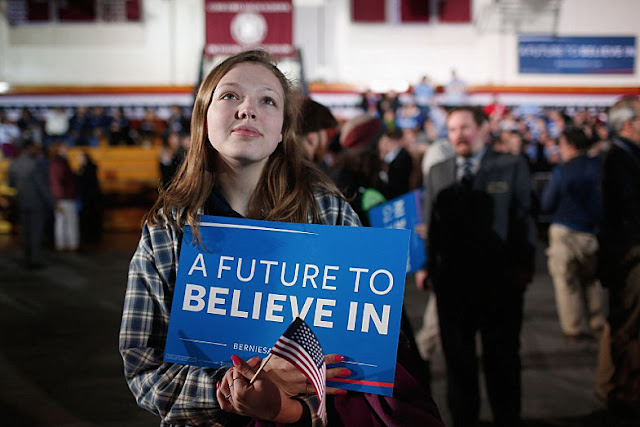 Now I understand why some of Sanders' supporters find it hard to vote for Hillary Clinton. Especially as polls show, those between 18 and 24-years-old.

When you're that age you tend to be very idealistic.

And of course, Clinton is a flawed candidate who doesn't inspire the young, like Obama did and Sanders does. And Bernie would have had a much better chance of defeating Donald Trump.

But with the polls narrowing, casting a protest vote amounts to voting for that dangerous demagogue. Or cutting off your nose to spite your face.

And is as Charles Blow writes, absolute folly. 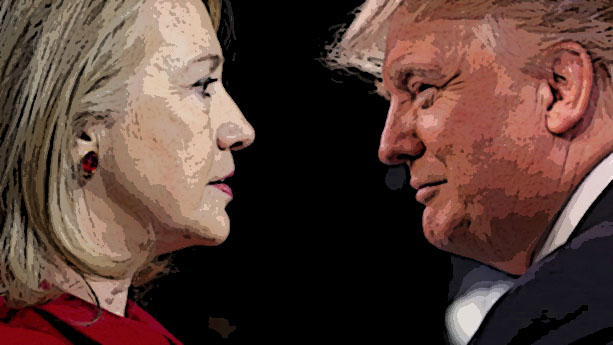 Clinton and Trump are not equally bad candidates. One is a conventional politician who has a long record of public service full of pros and cons. The other is a demagogic bigot with a puddle-deep understanding of national and international issues, who openly courts white nationalism, is hostile to women, Mexicans and Muslims, and is callously using black people as pawns in a Donnie-come-lately kinder-gentler campaign.

I'm pretty sure Bernie will be able to corral most of his wayward supporters. Now that he is making his feelings absolutely clear:

Warning them that him and his army of supporters would not be able to use their  considerable influence to pressure Hillary Clinton into keeping her promises, if Trump is elected.

Or properly continue their revolution.

And by urging them to stand up for the values young people believe in, by helping to spread this video...


#WeTrumpHate from Tucker Walsh on Vimeo.

And of course we should help spread it too.

For Trump is a fascist who threatens us all.

And every progressive in North America must help to defeat him...

You gotta break eggs to make an omlette and a Trump meal is needed. Delay will make America eat a worse meal.

You're going to start to see, that even Bernie voters won't be coerced by Bernie himself. Hillary has to do that. Plain and simple. We didn't vote for Bernie because someone else told us to.

Some people peg me as a Trump fan but they need oxygen to keep them from that blade. Hillary is simply the worst we have been offered since soylent green and you appear to stomach that due to the platidues.Vote Trump and burn down the <a href="http://thinkingaboot.blogspot.ca/2016/09/democracy-no-longer-works-despite-what.html<a\>school house.

The trouble with diving into the swamp is that the crocs and other inhabitants are much more adept and you probably will not survive. Given thew option setting a new course while skirting the depths of the bog would seem a wiser choice.Diving headlong into a bipolar state with fascism on the right and anarchy on the left is an act of desperation that should be reserved for the overthrow of ruthless strong men; not for bringing a wannabe to power!
RT

You keep trotting out that bullshit, Steve. Go ahead, and tell the African-American voters (Trump approval 1%), Hispanic voters and women (64% of white women disapprove of Trump) they need to vote for Trump who has run one of the most racist/sexist and hateful campaigns in modern history. Last night he stated he would bring back stop and frisk which is sure to bring more blue on black violence, as if there aren't enough blacks being killed by the police already. Use your privilege Steve to paternalistically tell them it's for their own good. Hilary Clinton is not the most perfect candidate but she has been investigated more times by the Republican controlled congress and senate (who have hated her since Bill ran for president the first time) than any other candidate for president and they still have nothing on her. But keep reading those conspiracy blogs Steve which are connected to the alt right and the Tea Partiers who have all that evidence about how dangerous Hilary is. After all, you're so much smarter than the Blacks. Hispanics and Women voters, right Steve?

Trump is the least competant candidate for President a major party has ever put forward. Anything to be gained from him running has already been accomplished by him locking up the nomination and sending a message to the GOP that voters want something new. He has no intentions of reforming the system if he comes to power, is dangerously unpredictable and not someone who can be trusted to handle executive power responsibly, and doesn't give a damn about anyone but himself, has no interest in learning or reading or becoming informed about situations that need to be understood to be an effective president, and he lies constantly.

You fucking stasi scum. You don't post my comments and you block me on twitter. I'm going to take this blog down.

Trump is a rabid climate change denier. Whereas Obama has taken serious steps to address the crisis. Oh wait. No he hasn't. And it seems likely that neither will Hillary. It'll be just like Canada where the Liberals capture progressive votes by acknowledging the problem but once in power admit that they'll fail to even meet the laughable carbon emmissions targets of the Conservatives.

Only 1% of US Blacks would vote for Trump. It's true. But they're also not crazy about Hillary. That would be because they've had their Black President and he let them down. They gave him two terms because of what he represented, but Blacks suffered disproportionately under the post-2008 austerity and recession. Hillary offers them more of the same and she's not Black.

They associate her with her husband's policies. Which have been disastrous for them. In very real and practical terms.

A vote for Hillary by anyone is a vote for the same dismal, elitist, imperialist, anti-human policies that have basically been a bi-partisan agenda for decades now. And that includes continuous wars around the world.

hi anonycon or Trumpling...I'm only running your deranged comment to show my readers why I have decided to delete comments like yours, and make it a safe and clean progressive area. And to let you know that you can't intimidate me, and since I have only blocked one Twitter person in the last few months, I vividly remember the Twitter account with the crazy clown avatar, so I know who you are and how crazed you are. And I would like to warn you to restrain your criminal tendencies, or you will be in serious trouble. And needless to say repeat that you will remain blocked, and any future comments from any Cons or any Trumplings will be deleted on arrival...

hi Steve...as I've said before, Trump is a fraud and will not change anything, just bring down the roof on our heads. He is a Con man, a bigot, and a misogynist, and he can only make matters worse not better. So I frankly can't understand how any decent person could support him...

hi unknown...it's true that Clinton must do more to help her own cause, but Bernie, and Obama will convince most Bernie supporters to vote for the Democratic ticket. Most of them already are, and as I mentioned in my post the only remaining problem are the under 24-year-olds. And if it looks like Trump could actually win, they too will be onboard...

hi Steve... I'm with RT and Mr Perfect. And as I said above I simply don't understand how you can claim you're not a Trump supporter, or could believe that he would be a better President than Clinton. When what Charles Blow says is only too true:

Clinton and Trump are not equally bad candidates. One is a conventional politician who has a long record of public service full of pros and cons. The other is a demagogic bigot with a puddle-deep understanding of national and international issues, who openly courts white nationalism, is hostile to women, Mexicans and Muslims, and is callously using black people as pawns in a Donnie-come-lately kinder-gentler campaign.

In a race between two flawed candidates Clinton is the lesser of two evils, and Trump is both deranged and dangerous...

hi Thwap....Obama has made progress on climate change, he at least recognizes the scope of the problem, while Trump believes global warming is a hoax, and would actively sabotage any attempts to fight. While among other things burying southern Ontario under a dangerous blanket of pollution from reactivated coal plants. And while Clinton may not be the ideal candidate, she is not a bigot or a fascist like Trump, and is the lesser of two evils...

And those are his good points

And Stein does not seem a lot better. Have a look at the video of Stein's take on global warming at Eli's site http://rabett.blogspot.ca/

This boy is seriously deranged.

Err, correction there I meant Gary Johnson. Stein is a bit weird but Johnson is so far out in la la land he's totally nuts.