Why Hillary Clinton's Illness Could Boost Her Campaign 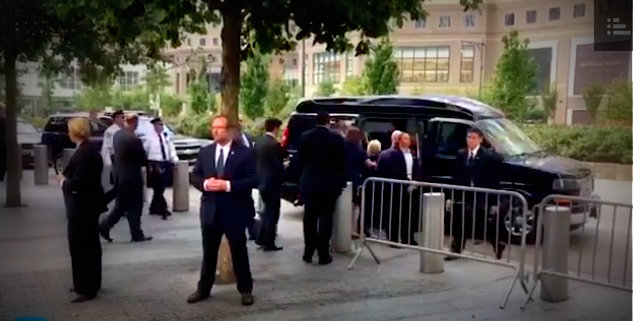 I didn't think the U.S. presidential race could become even more nightmarish. But I was wrong.

For on a day when that country was remembering its 911 dead, and vowing to stay strong. And less than sixty days before the election.

There was Hillary Clinton wobbling worrisomely and practically collapsing with pneumonia.

And what makes the situation even worse, is that although pneumonia is a perfectly curable condition.

It can only play into the paranoid alt-right fantasies of Donald Trump and his basket of deplorables or degenerates. 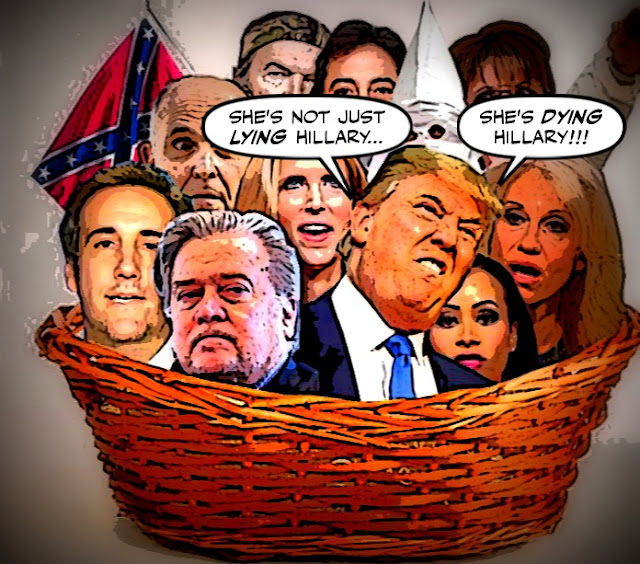 Who have been claiming for months that Clinton is suffering from everything from brain cancer to Parkinson's disease.

As his supporters were doing again yesterday.

Which is indeed the only reason why that wobble is so worrisome.

The margin between Clinton and Trump is so close now that any slip on her part, of the tongue or of the body, could result in the election of a Putin-loving, immigrant-stigmatizing, flip-flopping, shallow and painfully unqualified former reality-television host slash ersatz self-made emperor as the United States’ 45th president.

For those who believe, as I do, that Trump’s candidacy is an insult to the safety and intelligence of our country’s electorate, Clinton’s poor health is cause for concern only to the extent that it has the potential to improve her opponent’s chances.

But although it is worrisome, if I were one of Trump's grubby followers I wouldn't celebrate too soon.

For on a day when America mourned its dead, this story was just as damaging.

And his laughable medical report... 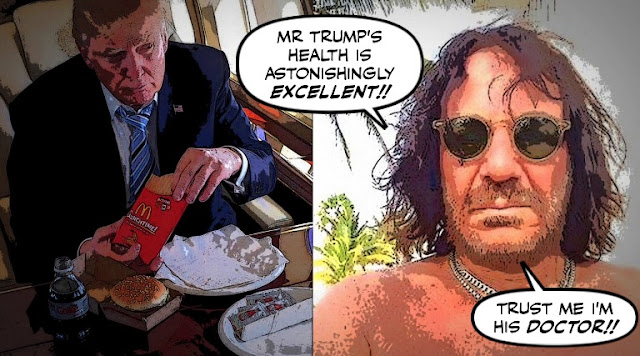 Which as we all know, was far from satisfying... 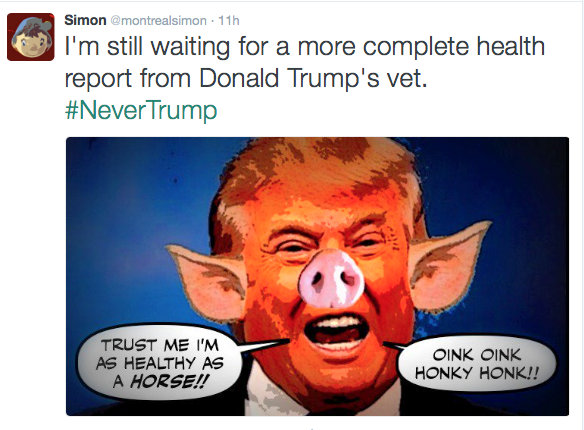 And can only raise questions about whether he's suffering from some undisclosed condition, like early onset Alzheimers, or terminal narcissism.

So I wouldn't be surprised if the hog was stymied, and Clinton's wobbly episode could actually boost her chances of becoming President.

By reminding progressives in the U.S. that like it or not, she is their only hope of defeating that dangerous demagogue.

And making them even more determined to vote for her...

Focusing media attention on Clinton, in the final phase of the election campaign.

And most importantly, by helping to humanize her... 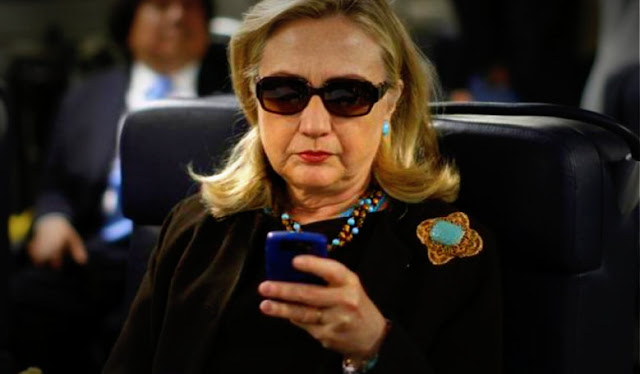 Which let's face it she badly needs, and has been trying to do with this new ad campaign...

So that worrisome wobble plays right into that campaign, and could turn out to be the best thing that ever happened to Hillary.

For in a contest between two incredibly unpopular candidates, the one that can boost his or her sympathy factor, stands to gain a decisive advantage.

And by acting like beasts, Trump and his gang of deplorables could be in for a very unpleasant surprise... 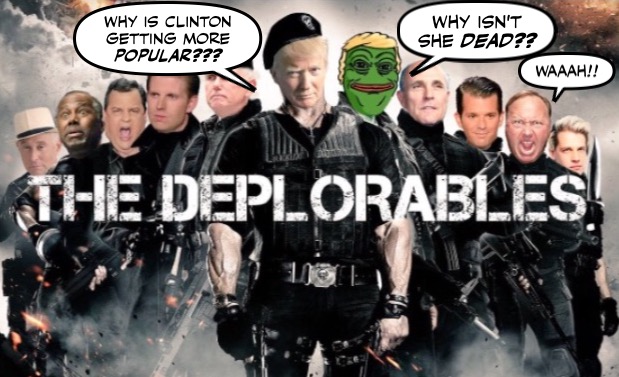 By showing their true colours. Repelling most decent Americans.

And showing once again why they are too ugly and too dangerous to govern...

As for sympathy for Clinton, I'm hoping that her illness will enhance her support. For her to have walking pneumonia on the 15 year anniversary of 9/11 in the midst of this campaign is testament to her hard work and proven values. One only has to look at her fight for Frist Responders to see her legacy thus far.
TS

Hi Simon, even if she actually does have the big P, her spin reinforces the impression she is incabable of being honest. Stick a fork in her she is done.

The best thing that could happen is she drops out, Biden or Sanders is the replacement and then Trump is toast.

Hey whatever happened to that Bernie Sanders guy? Heard he was starting a revolution or something. *Crickets chirp*

You were wrong about that, and you're wrong about this. Trump will be the next president. Can't wait to see Trudeau swallow his pride and have to deal with Trump for the next 4 to 8 years. :)

I highly doubt there are enough slack-jawed yokels in America to give him a mandate.

Interesting that some Democrats would vote for a dead person, given how often Democrats made dead people vote.
I had pneumonia once, and at the time I was half as old as Hillary Clinton. I was VERY sick and delirious, with a 40 degree fever. I would not be able to do anything, let alone attend public events. Apparently Ms. Clinton was diagnosed with pneumonia on Friday, in that case she should have been forced by her doctors to rest. I suspect we were not told the entire truth. In any event I hope she looks after herself and get better.
BW

hi TS..I think Clinton's biggest problem at this point is her inability to connect with ordinary people, and vice versa.So I think that anything that humanizes her can only help. The Clinton campaign has been doing a good job of attacking Trump, or letting him disgrace himself. But they must do more to sell the virtues of their candidate...

hi Steve...dream on, Clinton's delay in announcing her illness is obstinate not criminal. And nobody lies as much as Trump. So grease up that hog because he's going in the oven... ;)

hi Steve...I think Kaine would have to be her replacement, but although he is a bit boring, boring is good, and Elizabeth Warren would be my choice for VP...

hi anon 10:45...Bernie Sanders is doing very well thank you, and so is his revolution. You can check out the new website Our Revolution, and you can be sure that by the next election his supporters will be in firm control of the Democratic Party.
And no I was not wrong about Bernie, I always said that although I was pulling for him, he could not succeed until the millennials had the numbers to overthrow the Democratic establishment. That will happen in a few years, and in the meantime forget about Trump being President for one term let alone two. The guy is 70 years old and already showing signs of senile dementia, and I wouldn't be surprised if he dropped dead tomorrow. With his lifestyle and his family history, he's living on borrowed time...

hi BW...well I think those comments about voting for a dead person only show how determined many progressives are to vote for Hillary Clinton, if only to stop Trump.
But as for pneumonia, it can affect a person in many ways, some more serious than others. I had a chest cold develop into it once, and although it was one of the worst things I ever experienced, it cleared up in less than a day. Which doesn't mean to say that Clinton was right to take it that lightly. But the anniversary of 9/11 is a big deal in New York, and I guess she felt she had to attend....

75 year old Bernie is in better shape than Trump? Right...