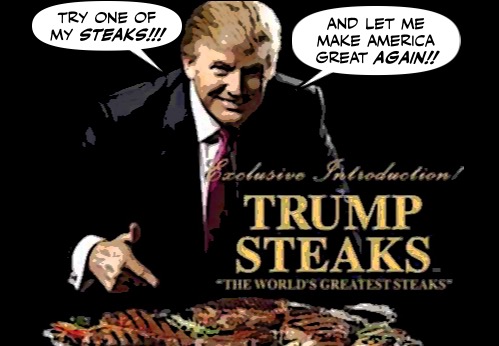 As a Canadian I have always found it hard to understand how Donald Trump has managed to fool so many Americans into believing that he is more than just a grubby Con man.

Its always seemed so obvious to me. I mean look at him. What else could he be?

But now at last that may be changing.

The media in that country has finally started to take a closer look at Trump, his Empire, and his campaign.

And revealing him to be a shameless hustler Con man clown. 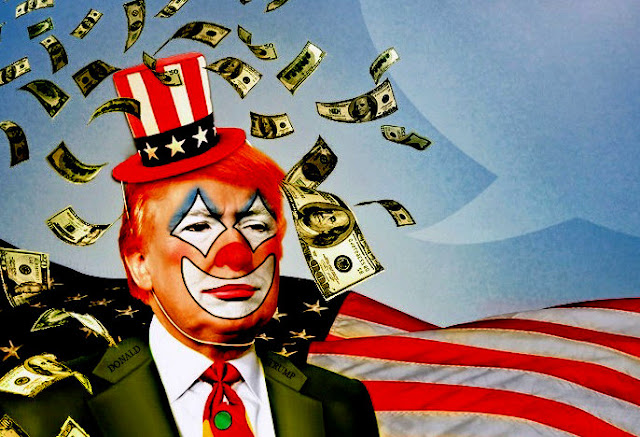 For this latest scam is outrageous.

Donald Trump’s presidential campaign has paid his family's businesses more than $8.2 million, according to a POLITICO analysis of campaign finance filings, which reveals an integrated business and political operation without precedent in national politics.

Can you believe it? He's using his campaign to enrich his own family businesses.

And so soon after his foundation was revealed to be little more than a slush fund.

Donald J. Trump, already under scrutiny for how he uses his foundation, directed more than a quarter of a million dollars from the charity to settle legal disputes stemming from his personal businesses, according to a report on Tuesday in The Washington Post.

Where he uses the money of others to pay his legal bills or buy himself presents.

Other unusual donations from the foundation have included $20,000 paid to an artist to paint a portrait of Mr. Trump, and $12,000 for an autographed helmet from the football player Tim Tebow.

And really does feed HIMSELF... 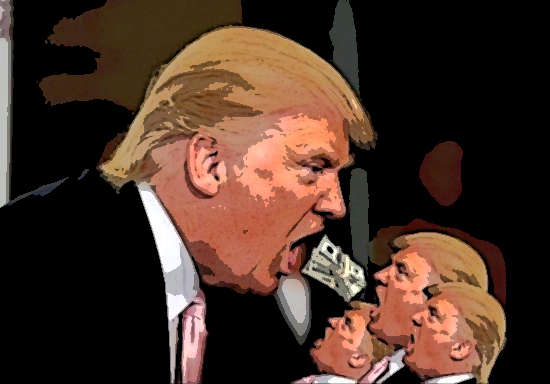 Gawd. No wonder that sleazy hustler is now under active investigation.

New York’s attorney general, Eric T. Schneiderman, announced Tuesday that his office was looking into Donald J. Trump’s nonprofit foundation, which is facing intense criticism in light of a political donation it made in support of the Florida attorney general.

And I'm sure many other investigations will follow. Oh look, here's another sordid scandal.

"We're herded into these small spaces," Kate said. "The apartment was like a sweatshop."

Trump Model Management recruited models as young as 14. "I was by far the oldest in the house at the ripe old age of 18," Anna said. "The bathroom always smelled like burned hair.

Young girls, working illegally, and treated like SLAVES by the Trump Empire?

No wonder the Democrats are calling for a FULL investigation. That's the kind of story even Trump's dumbest supporters can understand.

But then why should anybody be surprised?

When as Elizabeth Warren has pointed out, it was all so predictable...

These scandals can only put even more pressure on Trump to release his tax returns, and reveal what else he is hiding.

Which should keep him under a cloud of scandal all the way to the election.

And put a massive dent into his chances of ever being President.

Hallelujah. May the decent take some comfort, and or pray furiously.

The Con man will be exposed.

And with a little bit of luck, he may eventually end up in the place where he belongs... 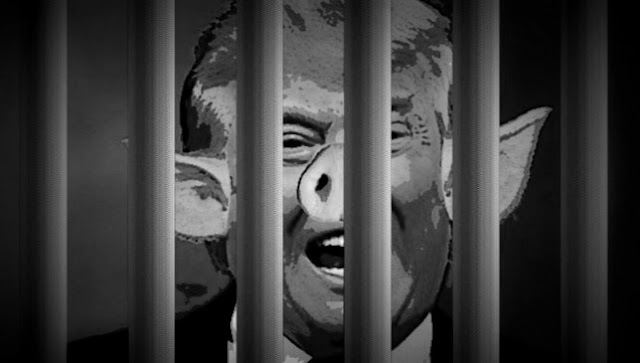 Labels: Con clowns, Donald Trump, The Death of the Republican Party, The Race for the White House, Trump scandals

Thank you for another great post. We get this information from various sources, but it's nice to see in one package. Also love to see the Clinton campaign videos.

the only creepier thing i saw lately other than the picture of thedonald selling steaks (gaaaawd! does the american common denominator get any lower?) is that of steviethegreatcanadianeconomist smiling for a looong, looong time.

somebody should tell these phoneys that we can tell that they are wearing no clothes.
phooey!

Trump is not fooling anyone, Simon. But neither is Hillary. As someone aptly put it, this is the election of the "deplorables" - the candidates, not the voters.

Or as some other obviously non partisan, independent voter had put it: we are being asked to choose between the disliked (Trump) or the distrusted (Hillary).

According to one survey, words that came to mind when thinking about Trump were: bigot, racist, unpredictable, corrupt, etc. For Hillary, the words were: corrupt, liar, dishonest, entitled, etc. You see the drift? :)

Or, as I had mentioned before, Assange had also very aptly said that it was between choosing between gonorrhea or cholera. It appears that many independent voters are choosing to catch neither because the polls are showing that both Hillary and Trump are each being supported by less than a third of the independent voters. And they are both being supported by only a minority of the millennial voters.

And, contrary to the claims of Hillary supporters, the media had been dumping on Trump for quite a while. Here is Greenwald (a Pulitzer prize winning journalist) suggesting that non Hillary media is even being bullied: "All of this means that any journalists reporting negatively on Clinton are instantly and widely bombarded with criticisms denouncing their work as illegitimate .....".

And also this from Greenwald too: "The reality is that large, pro-Clinton liberal media platforms — such as Vox, and the Huffington Post, and prime-time MSNBC programs, and the columnists and editorialists of the New York Times and the Washington Post, and most major New York-based weekly magazines — have been openly campaigning for Hillary Clinton."

Here is the link for the above quotes from Greenwald: https://theintercept.com/2016/09/06/the-unrelenting-pundit-led-effort-to-delegitimize-all-negative-reporting-about-hillary-clinton/

And, if memory serves, Stephen Cohen, Prof. Emeritus at NYU and Princeton had said that the media had been calling Trump a lot of nasty names that would not have been acceptable and would have caused outrage had they been applied to another candidate. Not defending Trump here (he does deserve some of those names), but let us be fair and recognize that the media has been in Hillary's corner in this election, eh?

If Trump wins, will you have someone film your head exploding, and upload that to YouTube? Thanks very much!

i can appreciate your great attempt at seeing things in a balanced way. that's very Canadian and much appreciated.
:)

i can't imagine, however, why thedonald would be 'disliked'... could it be that he is a lowly meat vendor, pretending to be presidential? i'm tired of the laundry list of thedonald's misdeads but i'd like to point out their connecting threat - his tendency to lie, promise and not deliver. if that's not dishonest, then i don't know what is.

and then there is the media - the media's failure lies less in calling anybody anything ('cause, you know, they are a classy bunch) and more in failing to withhold attention to the talking boiled ham... the only appropriate place for that mouth to be is in a diaper which should be changed often to prevent lip rash

so it comes down to this: who, in this election, is honest?
cheers luceforma

Hillary Clinton and Donald Trump are two of the most polarizing presidential candidates in modern history. On Tues. Sept. 27, FRONTLINE’s acclaimed election-year series, “The Choice,” returns — going behind the headlines to investigate what has shaped these two candidates, where they came from, how they lead and why they want one of the most difficult jobs imaginable. From veteran FRONTLINE filmmaker Michael Kirk, “The Choice 2016” will investigate formative moments in Clinton and Trump’s lives through interviews with those who know them best, providing in-depth, trustworthy reporting and powerful new insights at a moment when voters are being bombarded with conflicting partisan stories about each candidate.

I wonder if the folks at Anonymous or

could gain access to Trump's income tax returns and release them online? 8-)

1. what's wrong with safe space?
2. there are those who live their life to change the things they can
3. those who troll safe spaces should fuck off fast and far and not come back

hi anon...let me be clear, I don't need a safe space. I've studied martial arts for more than fourteen years, so I can handle myself thank you very much. But I do want a comment page where progressives can air their views, without being subjected to the bigotry and disgustingness of Con trolls. And no I don't expect to have my head explode on November 8th. Although I might have a hangover when it's all over, from celebrating the total defeat and humiliation of your cowardly Fuhrer...

hi TS...thanks. I've always believed that in our fragmented information overload society a lot of people can't see the forest for the trees. So I do my best to try to focus on the big picture. And yes, between now and November I'll be spreading as many anti-Trump messages as I can...

hi Luce....yes our would be emperors are indeed running around without any clothes on these days. And you're right, there;s something eerily similar between the sight of Trump flogging his overrated and hard to find steaks, and our former dictator flogging himself...

hi anon...as I keep repeating, this election does have two less than ideal candidates. But Trump is a bigot, a misogynist, who is appealing to the worst angels of humanity. While Clinton for all her flaws is better than that. And while it's true that the media is now attacking Trump more than Clinton, for a long time they let him get away with murder, treated his campaign as infotainment, and didn't hold him accountable enough. So the way I see it the balance has finally being righted....

hi David...OK I'll see what I can do. ;) But look at it on the bright side. The longer he refuses to release his tax records, the more he will look as if he is hiding something, so our side can't lose....

I predict Trump will NOT release his income tax returns before the election. If Trump did, he would be exposed for not having the billions of dollars he claims to have.

If a few days before the election, the polls all show Trump is going to win, would Obama secretly task someone in the IRS to release Trump's income tax records? 8-)