Donald Trump and the Shadow of the Klan 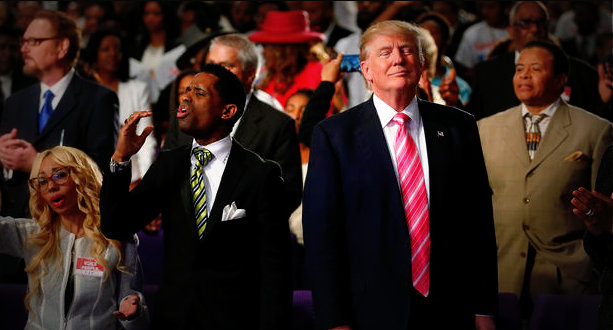 When I saw Donald Trump in a Detroit church, trying to appeal to African-American voters by posing as a religious person.

And swaying awkwardly from side to side to the strains of the song "What a Mighty God We Serve."


I must admit that I laughed so long and so loudly I was practically transported myself.

But of course it wasn't really funny, it was the act of a desperate Con man. 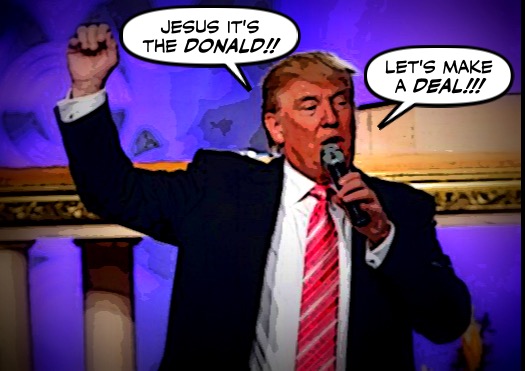 And an absolute farce.

Donald J. Trump, who has campaigned for president as a blunt provocateur, dismissing complaints of racial insensitivity as political correctness, took an uncharacteristic step on Saturday: He visited a black church for the first time and tried to blend in.

Since The Donald is not a religious person, and only worships HIMSELF.

More than 90% of African-Americans have no intention of voting for him, for all kinds of good reasons.

Mr. Trump is deeply unpopular with black voters and perceived by many as hostile to their community. His company has faced accusations of discrimination against black tenants; he has alleged falsely in the past that President Obama was not born in the United States; and as a champion of aggressive policing, he has stirred indignation by caricaturing black neighborhoods as blighted by crime and economic despair.

And with just two months to go before the election, they are probably NOT going to change their minds... 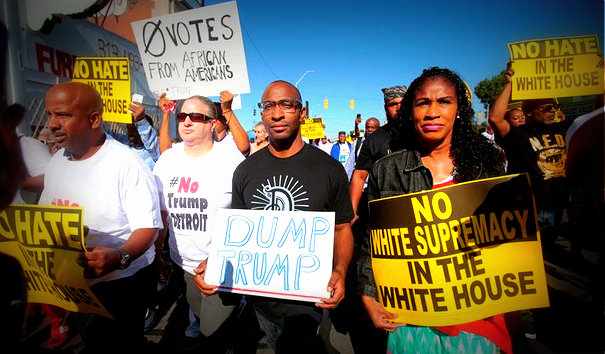 Because like so many other Americans, they know a bigot, a misogynist, and a Con man when they see one.

But then of course Trump is not really trying to win the black vote, he's only trying to fool alienated white Republicans into believing that he's not a racist.

Which will also not be easy, considering his warm feelings for white supremacists.

An analysis of Trump’s Twitter account revealed that his racism is no accident. Donald Trump has retweeted white supremacists 75 times since his campaign began.

And their warm feelings for him... 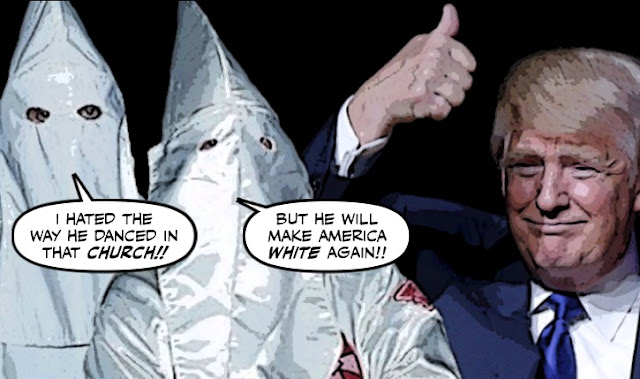 So yes it is all a farce.

His claim that the Trump Party is the "Party of Lincoln" is outrageous... 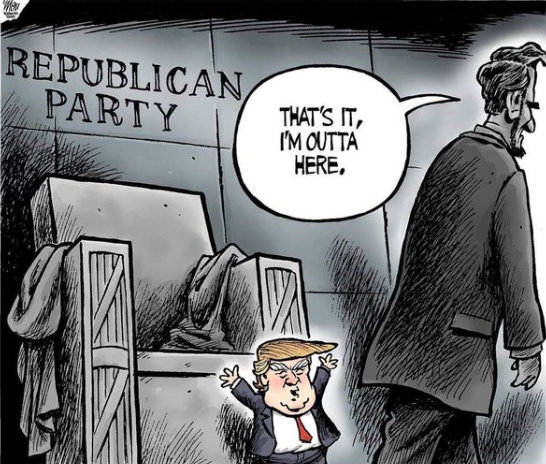 And when Trump asks black voters "What have you got to lose?"

The answer can only be EVERYTHING...

Donald J. Trump: a dangerous demagogue and a racist.

Who must be defeated by all decent Americans.

Before he leads their country to a very bad place... 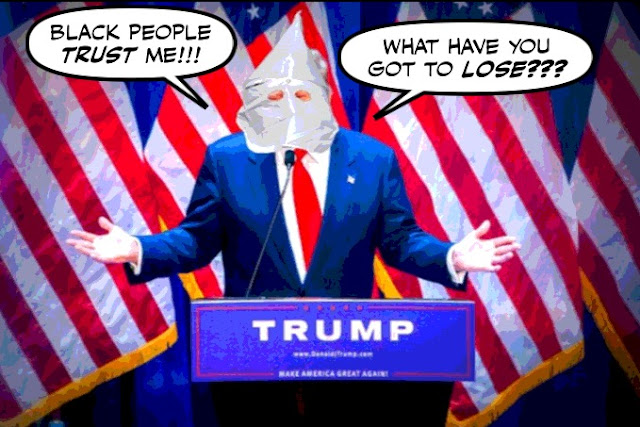 Labels: bigotry, Donald Trump, racism, The Death of the Republican Party, The Race for the White House

Looks like Trump is ahead in quite a few polls and the clock is ticking. These attacks ads aren't going to work. It's not 1995 anymore. The media screaming "RACIST RACIST" at the top of their lungs day in day out, might work on a low information voter but no one else believes them. You talk about the Cons here in Canada using dog whistle politics (which is absolutely true) but don't think the left doesn't do it just as much.

Did you see how Reuters cut the live feed of Trump while he was being blessed in that Detroit church? The Lying Press is pulling out all the stops. https://www.youtube.com/watch?v=UGTzjZqfZUA

I must admit I was completely dumb-founded when Trump came out with this whole "What have you got to lose?" schtick. I reeks of desperation and a complete lack of fresh ideas and careful though. It reeks of status quo.

hi anon...actually the low information voters support Donald Trump. Most decent Americans are revolted by that disgusting demagogue. And when the time comes, they are going to crush him like a bug...

hi Way Way Up....yes it is shocking, and in addition to the things you mention, it also reeks of condescension, and betrays Trump's racist core. As many have pointed out, he's not really trying to appeal to alack voters, he's only trying to reassure disaffected white Republicans that he's not a bigot. And good luck with that one....

I don't think Trump was trying to appeal to Black voters by going to that church in Detroit. He knows the polls as well as anyone and knows he has zero appeal to that demographic.

Trumps trips to Detroit and Mexico were designed to provide cover both for him and for his real target demographic - the angry White bigot who may not want to be called a racist for voting Trump. Trump and his supporters can now point to this "outreach" to Blacks and Hispanics and deny bigotry.