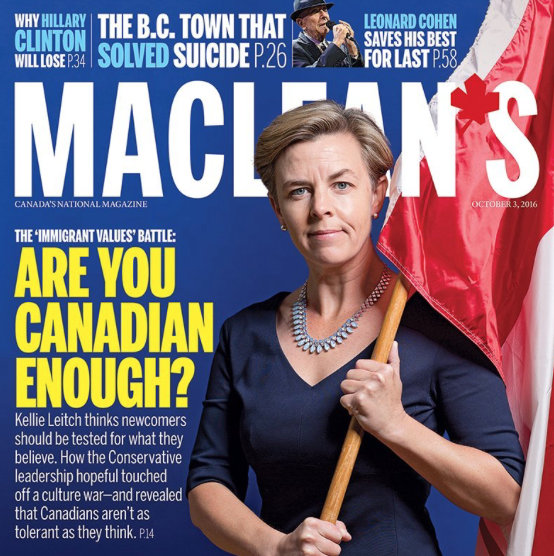 I wasn't planning to write another post about Kellie Leitch for a while, because I feel I've written enough about her to last me a lifetime.

But then I saw the cover of the latest issue of Macleans and I changed my mind.

Because although that picture is absolutely ridiculous, and has people howling with laughter all over the country.

And wondering where did she get that flag pole from? 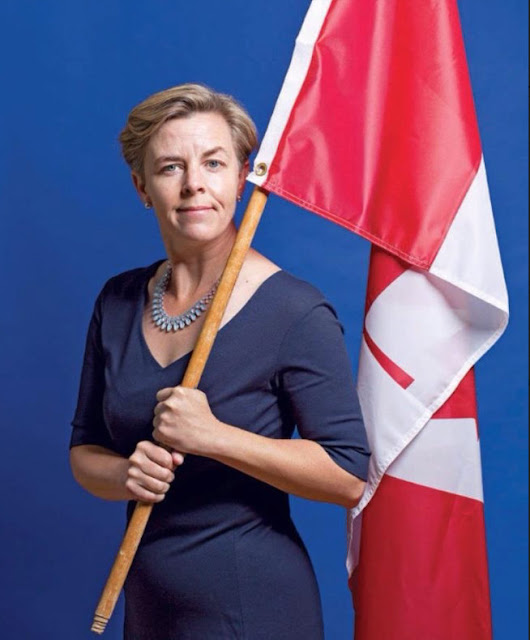 And is it a broom stick or a curtain rod?

Leitch loves that picture so much she's using the critical reaction to raise money for her leadership campaign.

Kellie Leitch is quite pleased about her appearance on the front cover of the latest issue of Maclean’s, and the reaction it’s provoked among “elites”.

In a new fundraising email pitch to supporters, which landed in inboxes late Saturday evening, the Conservative leadership candidate lambastes “the media and glitterati” who’ve been blowing one gasket after another since she proposed screening immigrants for Canadian values.

Claiming she's being mocked, or persecuted, by the nasty "elites" who hate her for her Canadian values.

“Do you know what has them so upset? It is because I’m proudly holding a Canadian flag! That’s right, the self-hating Canadian elites can’t stand the idea of a proud conservative standing up for Canada and Canadian values,” she says.

When in fact, along with Chris Alexander, she is the last person in this country to lecture anyone about their Canadian values... 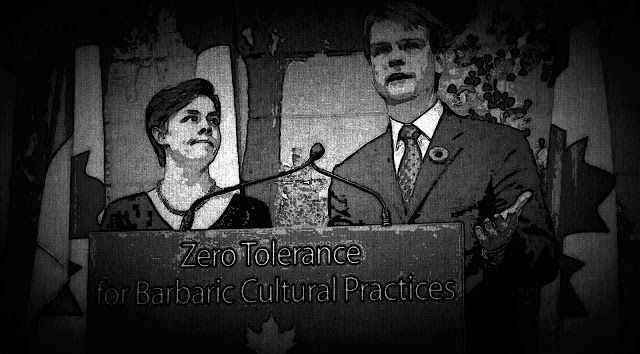 After having desecrated those values so barbarically.

And as for her claim that the "elites" are after her, if you read the Macleans' cover story, it makes only too clear that with an MP's salary, and the salary of a an orthopaedic surgeon, and the money she gets from being a trustee of the big real estate investment trust REIT.

Leitch, who took Justin Trudeau to task in the House for accepting speaker’s fees from charities in 2013, tells Maclean’s being a REIT trustee provides insight into the housing market and real estate. “Having an intimate understanding and thoughtful dialogue with my board colleagues on what are those issues is very important,” she says. “I’ve always been fortunate to be given lots of different opportunity to allow me to be a well-rounded individual, and this provides me part of this opportunity.”

Leitch’s involvement with Bay Street titans exists at a seeming disconnect from her bashing dissenters as “elites.”

She's a member of the "elites" herself.

So she couldn't be more hypocritical. And the only reason she's using the word is to sound even more like Donald Trump... 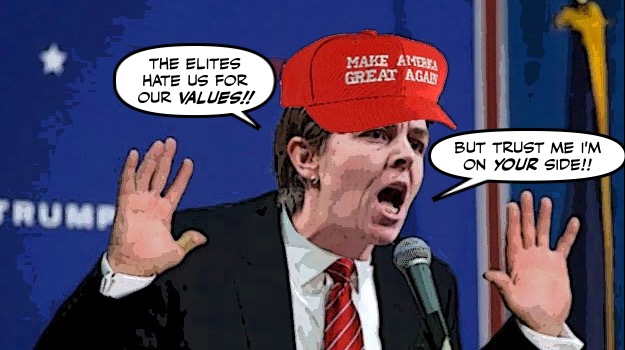 And try to to stir up a culture war in Canada like Trump is doing in the United States.

Which of course we need like we need a hole in the head.

So Kellie Leitch should get down from her high horse.

Stop waving a flag around, and trying to pose as a great defender of our values. 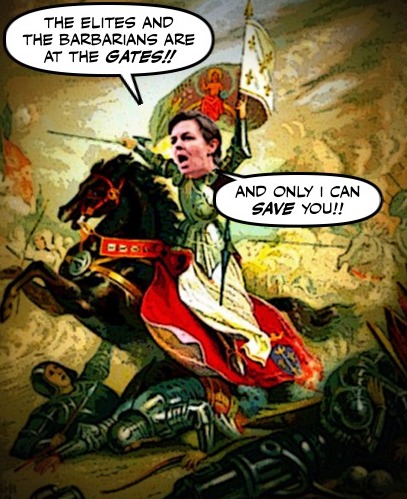 And end her divisive campaign, before she stirs up trouble in our peaceful country.

The elite? Well I guess it takes one to know one. A quick look at her wiki entry suggests a person with a good at least uppper middle class backgound and a stellar career in medicine with some other business/admin oriented experience.

The weird thing is the MBA. One seldom, in my experience, sees that in medical doctors. A M.P.H is common enough.

That's probably a mop handle. As a Con, she probably 'borrowed" it from a Parliamentary broom closet

The flag pole is a relic of the Conservative Party of Canada governing era.

The pole has been authenticated as having been in the Parliamentary closet with Stephen Harper.

End her campaign?! I'd like to see her win. That would pretty much guarantee seven more years of the Cons flailing around blindly in the political wilderness.

The shittiest Conservative is far better than any leftist lieberal.

At first glance spouting phrases like "unified Canadian identity" that includes opportunity,hard work,giving back,equality and tolerance for all religions,cultures,and sexual orientations seems a noble endeavor. Especially considering the views of the Con support base.But then she gets a little testy and true intent emerges when the interviewer suggests she is singling out Muslims with her example of gay people being stoned to death.
In reality its the same old political game of doublespeak.Undoubtedly she was trained by the master but unless Leitch somehow manages to up her game the one trick "Canadian values" pony doesn't have legs. Not when Harper brought us a never ending array of doublespeak initiatives and still ended up in the dust bin. Remember Fair elections,Religious freedom,Ethical oil,Friends of science,Canadian National interests( alias big corporations),Economic action plan, Safe streets and communities act (omnibus bill c-10) etc.
On a separate note one of the great Con clown fixers and Harper buddy Bruce Carson was found guilty for his oily influence peddling schemes and will be sentenced shortly.Hopefully the judge will not be lenient considering the size of the funds he misappropriated and the environmental and economic mess he helped foster.
RT

>>Anon 7:54p
I will give you fauxcons one thing. An alarming number of you seem to enjoy stroking this Us vs Them mentality. WTF is up with that anyway? Do you find in your life that perhaps you do not seem to get along with anybody? Do you feel that is everyone else's fault? If the Harper or his ilk are your kind then perhaps a career in the military would be good for you. Of another nation preferably.

MY wife's cousin in Britain had two sons who performed in the NWA pro wresting circuit for about a dozen or so years. They were heels (bad guys) who called their tag team "Seek and Destroy." They adopted the skinhead look of shaved heads and combat fatigues as well as carrying a British flag at the end of a long broom handle. This is the well known garb of white supremacist/neo nazi/National Front supporters in Britain which lead to a chorus of boos when they entered the squared circle. Perhaps Ms Leitch has lived most of her life in a sheltered environment but I'm finding it hard to believe she might be that stupid to continually through her actions demonstrate the behaviour of a white supremacist. Which is what her posing for MacLeans with the Canadian flag on the broom handle reminds me of, along with her and Alexander's snitch on a Muslim hotline and the Canadian values test for immigrants she proposed. I'm half expecting her next move will be to shave her head and start wearing a t-shirt with a swastika on it while pretending there's nothing wrong with that, it just shows she loves her country.

hi jrk.... I must admit that I am biased against doctors with MBAs. I believe that medicine should be a calling not just another business. And Leitch strikes me as particularly rapacious. But she definitely is part of the economic elite, and her attempt to pretend she's not is absolutely ridiculous. And yes, it does look like a broom handle, and no wonder the cover people cut the photo off at her clenched knuckles...

hi anon...but wait, wasn't the flag Harper was frantically waving in his closet a WHITE one? ;)

hi anon...I knew somebody was going to say that, and of course you could be right. I'm so annoyed to see Leitch running after what she did during the last election campaign, I sometimes forget she could be a useful bigot. Hmmm...now that I think of it, and now that Kenney is gone, maybe I should be supporting her for Con leader... ;)

hi anon...Thank you. That deep though just about sums up everything that's wrong with our Cons aka The Harper Party. They're as dumb as spoons, seething with rage, as vulgar as they come, and for that reason and so many others, are going absolute nowhere...

hi RT... Leitch's stated aims are noble ones, but the problem is she is trying to pin the responsibility for upholding those values on refugees and immigrants, while ignoring those who flout our values who are already here, or were born in this country. So it is just sugarcoated xenophobia, and Leitch should be ashamed of herself.
But yes, I saw that Bruce Carson has been found guilty. Too bad that didn't happen when Harper was still in power. But you can be sure of one thing, as Harper sells himself to the higher bidder, he won't be putting Ol' Brucie on his resume...

hi anon...well said. I only run the occasional comment from a Con, because I want everybody to see who they are, how low they are, and why they must never be allowed to return to power...

hi Mr Perfect...that's interesting, I knew there was something fascist about Leitch's ridiculous photo. The first thing that came to mind was a Nuremberg-style rally. And although I wouldn't call Leitch a Nazi, her divisive campaign is made to measure for white supremacists, and if she doesn't shut-up and go away, she could help lead us, again, to a very bad place....

Look - I feel incredibly fortunate to have been born and to live in a country such as Canada. But, IMHO, extreme nationalism is one of the things that is preventing peace and harmony throughout the world. There shouldn't be 'Canadian' values, but rather human values. There are no races, only the human race. Everyone is deserving of respect and dignity, of clean water and a chance to live a meaningful life.
Ask anyone on earth whether they wish these things. Do any parents not want their children to live healthy and happy lives?
Traditional conservatives seek to create a narrow view of the world that draws imaginary lines in the sand. They neurotically wish to protect their possessions with an attitude of entitlement. They're not interested in sharing or equality. Build fences and walls, create more barriers, restrict more freedoms.
I'm sick of this selfishness. We are all responsible for the state and future of humanity.

I'm finding her repeated use of the words "Canadian values" obnoxious. Pure weasel words that he never seems to want to define.