Jason's Kenney and the Last Show in Ottawa 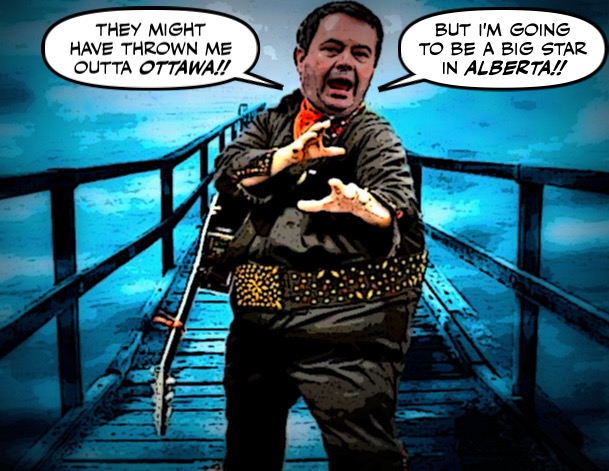 The ghastly show is finally over. After a shabby twenty year run on Parliament Hill Jason Kenney has packed up his harp, and finally left the building.

But not before one last tawdry song.

Jason Kenney delivered a rousing and emotional farewell speech in the House of Commons on Thursday after nearly 20 years as a member of Parliament. He struck a non-partisan tone and urged his colleagues to embrace their role as legislators, not simply as foot soldiers of a political party, and to relish their time in the hallowed halls of Centre Block — "the temple of our democracy," as he described it.

Which couldn't have been more phony or absurd. Kenney the ultimate rabid partisan preaching non partisanship in the "temple of democracy" he desecrated over and over again.

And that wasn't the only scandal... 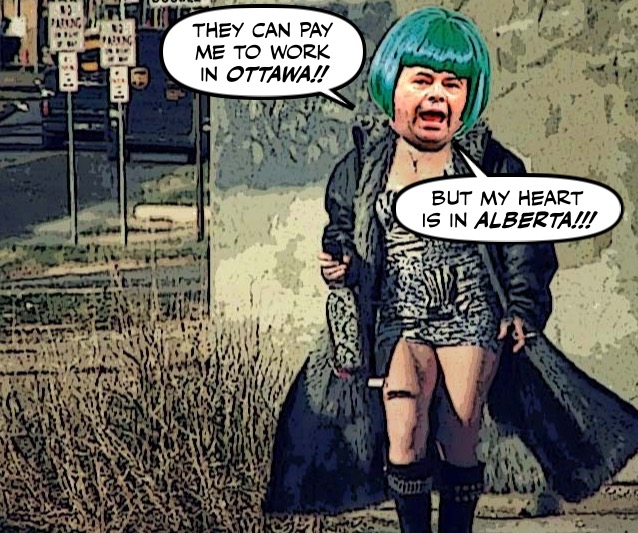 For even though he was still being paid by tax payers to be a federal MP, he spent his last week in the House of Commons acting as if he was in the Alberta legislature, and attacking Rachel Notley.

Longtime Conservative MP and former Harper cabinet minister Jason Kenney may have spent his last week as an MP in Ottawa but his heart — and political focus — were apparently already in Alberta, where he’s staging a bid for the leadership of the Conservative party in an effort to “unite the right” in the province.

Kenney spent his final week as a federal MP raising issues of particular importance to Alberta voters so frequently and with such evident passion that Prime Minister Justin Trudeau made a crack about it during question period.

And had to be reminded by Justin Trudeau where he was.

“I’ll take this opportunity to remind the member opposite that he’s actually still in Ottawa and not in Alberta yet.”

Can you believe that? What shameful contempt for the tax payers, and the house of democracy.

But then of course Kenney is shameless. And he isn't embarrassed to use federal dollars to campaign in a provincial leadership campaign, because he has been doing that for months... 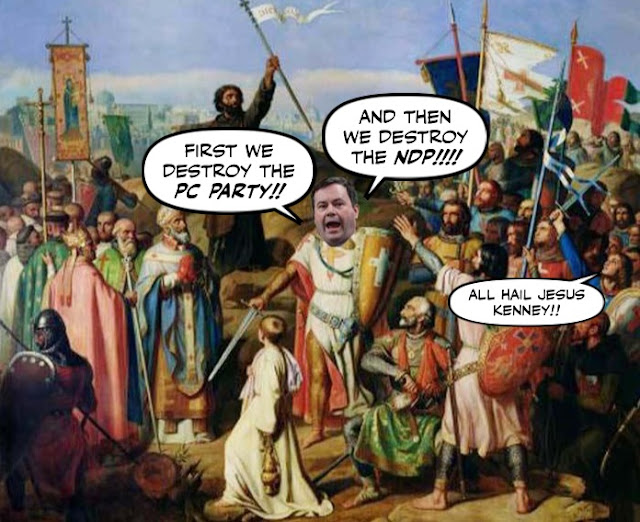 So when I read all the puff pieces in the MSM praising him as a great parliamentarian, and a great Canadian, I feel the urgent need to correct the record.

For whatever those Con fluffers say, Jason Kenney was not a great parliamentarian or a great Canadian. He was an ultra right wing religious fanatic and appalling bigot, who sought to divide Canadians for crass political purposes.

He embarrassed himself and his country in the eyes of the world... 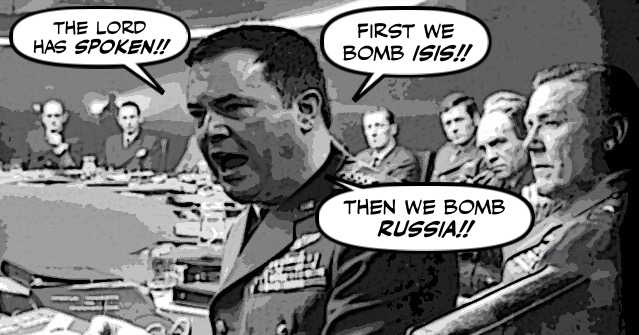 Served the interests of Big Oil as faithfully as he served his Lord, and his depraved leader Stephen Harper.

And I will never understand how him and his ghastly Con gang managed to avoid ending up in court charged with crimes against Canada... 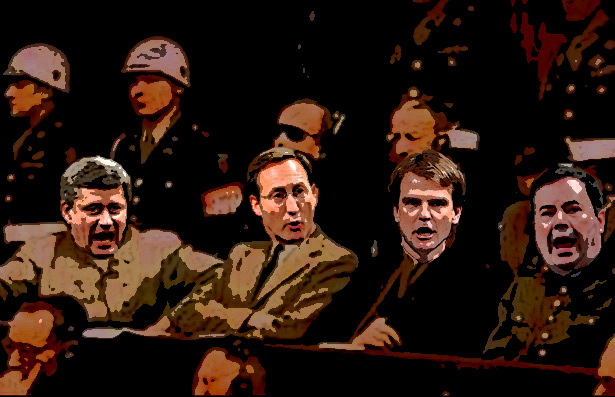 But then it would take a long time to list all of Kenney's crimes. So I thought I'd just do what I did when Harper left Parliament.

And make a little tribute video, complete with some fireworks to celebrate his departure...

So we must do what we can to help the good people in that province crush his hopes of ever becoming Premier.

For if he ever became Premier, he could destroy both Alberta and Canada.

So the bigot must be defeated, and the monster must be stopped...

hahahahahahahahahahahahahaaaaaaahahahahahahahhahahahahahahahahahaaaaaaaaaaa!
ok,
first, i want to ask how is it possible that the harper deeds go unaddressed, unscrutinized, unpursued, and that despite his decade long, systematic attack on Canada, some still accord him the honourable denomination of Prime Minister of Canada. i fail to fathom how is it possible that death threats can be made against our elected representative without it being made a public issue, without names, without faces? and what is with the apparent complacency about kenney (and harper for that matter) drawing public funds while not in the public's service (though here, at least, i can imagine a legal summersault)... all i got is: the fear of being seen as partisan (and then, of course - people are glad that stevie's a thingofapast). but it strikes me as a lame explanation... ... anyone?

second, thank you simon, you really are a shining star in my Canadian sky... i just wanted to say one thing: sex trade is a sad, dangerous and, ultimately hard-working profession, none of which are familiar to kenny. i suspect that in your post, you wished to emphasize the exchange of human conscience for power and the immorality of it, perhaps... and i admit, i howled when i saw your rendition of green-haired kenny but the longer i looked at the picture (which conveys an idea so well), the fact of a real face of a destitute wo/man kept creeping into my heart and i found myself wishing that we do not add salt to the wounds of those who are already suffering by associating them with far dirtier, unwashable and disconnecting guck than necessity - glut.

and finally, can you please comment on what's going on with Canada negotiating extradition treaty yes/ no with China. why this discord? cheers.

Oh goody. Now he's Alberta's problem :( I can't help but think that he's actually just going to self-destruct. There are so many red Tories in the PC's here that can't stand the guy (not to mention there are plenty of Wildrosers who feel the same) so I really don't know he thinks he'll accomplish. My guess, is that he knows there isn't much the Cons can do federally to defeat Trudeau in the short term so he's hoping to stick it out here in Alberta before re-emerging to take a run for PM. He's too much of a coward to take the Liberals head on now so he'll just cower away like the predatory dick that he is and bide his time. I wish this was last we'd see of him on the federal level but I suspect otherwise. For once, I actually wish I was dead wrong.

I'm worried the right vote is gonna split between the cons and the wild rose and notley might win. That would be terrible if she got another term.

Notely has been doing a good job. What the heck are you talking about, Irene

Hi Luce....it's not my intention to attack or criticize sex workers in any way. I have always defended their right to practice their profession in safety, I believe it should be legalized, and I have absolutely no hang ups about sex. And since nobody could seriously believe that anyone however desperate could purchase the sexual services of Jason Kenney, all I wanted to illustrate was Kenney's hypocrisy. I should have used the same picture, but one where he he's wearing a military helmet instead of a green wig... ;)

hi Way Way Up....yes sorry about that, now Kenney is indeed Alberta's problem. But I'm pretty confident that the good people in your province won't be fooled by that grotesque bigot, and will finally bury his political career. As for whether Kenney might return to Ottawa after that, I suppose it's possible for being a political is all he
knows. But I'm hoping that a humiliating defeat will make him change his ways, and confine himself to a monastery for the rest of his life...

hi anon...well your worry is my hope. For it is entirely possible that far from uniting the right in Alberta, Kenney may divide it further. And god willing return Notley to power...