Donald Trump and the Madness of America (Continued) 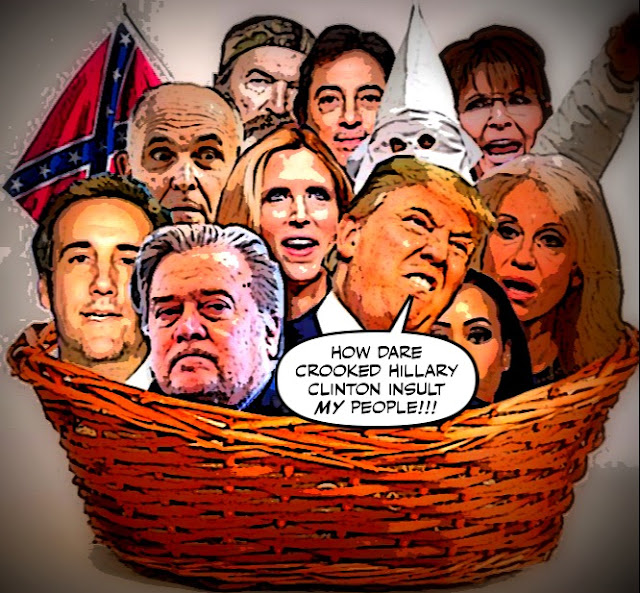 There are now less than sixty days to go before the U.S. presidential election, and with every passing day the campaign just seems to grow crazier and crazier.

For what else can explain that Donald Trump can say something as deranged as this.

Donald J. Trump, in escalating attacks against Hillary Clinton, suggested on Friday that his opponent was so immune to prosecution that she could shoot someone in front of thousands of witnesses and not be prosecuted

But doesn't feel the need to apologize. 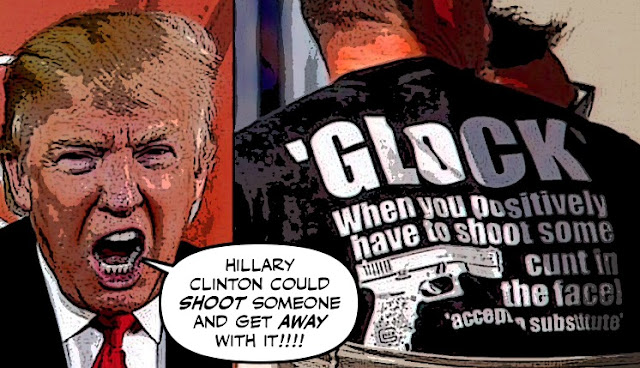 While Hillary Clinton feels she needs to say sorry for calling many of Trump's bestial and violent supporters a "basket of deplorables."

Hillary Clinton expressed "regret" Saturday for comments in which she said "half" of Donald Trump's supporters are "deplorables," meaning people who are racist, sexist, homophobic or xenophobic.

When in fact she should be doubling down on that basket of degenerates.

For while the pasty pundits might debate whether she was being politically incorrect, she's right about Trump's supporters.

Many of them are racist, sexist, homophobic, and xenophobic. Trump's whole campaign has been driven by hate... 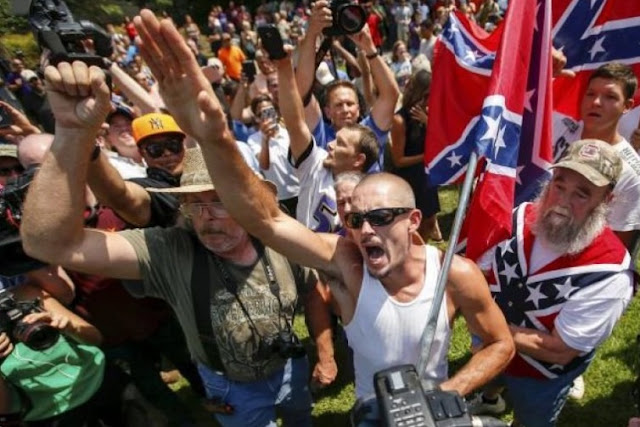 He is the leader of a smelly bigot mob.

And lest anyone doubt that he is a budding fascist, all they have to do is check out this tweet from Roger Stone, the sleazy Con operative who once advised the Trump campaign... 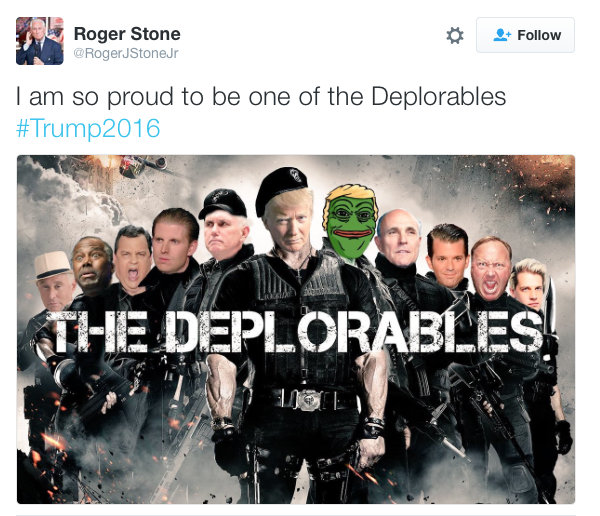 One, Pepe the Frog, who is the mascot of the white supremacists.

And two, the guy on the far right who is Milo Yiannopoulos, the filthy misogynist...

And the good friend of Ezra Levant our bigot frog, or hog... 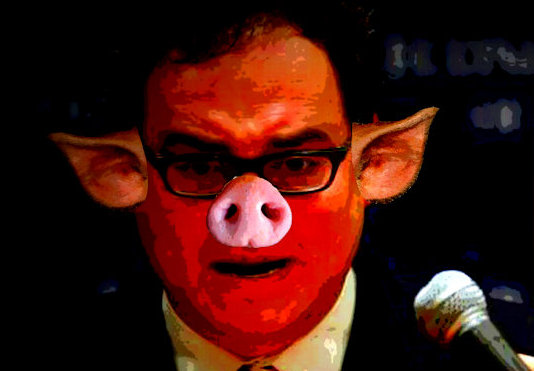 Just so you know who they are, and how low they will go.

You know, as Canadians we can't vote in the American election, but thanks to the internet we can reach out across the border and help defeat Donald Trump.

Whether in his youth, in his business career or in his personal life, Trump’s story is that of a shallow egoist who uses those around him.

Even as a child, he personified privilege and entitlement. In business, he proved a genius at marketing himself but grew his fortune more slowly than if he had put his wealth in a stock index fund. He made a mess of his personal life and has been repeatedly accused of racism, of cheating people, of lying, of stiffing charities.

His life is a vacuum of principle, and he never seems to have stood up for anything larger than himself. Over seven decades, there’s one continuous theme to his life story: This is a narcissist who has no core. The lights are on, but no one’s home.

That expose Trump as a bigot, a bully, a Con man, and a hollow narcissist.

That show him to be a both a monster and a maniac.

Or by just doing what we did to Stephen Harper, and giving him a taste of his own medicine.

And helping our American friends to drown their would be tyrant, in a pool of his own excrement... 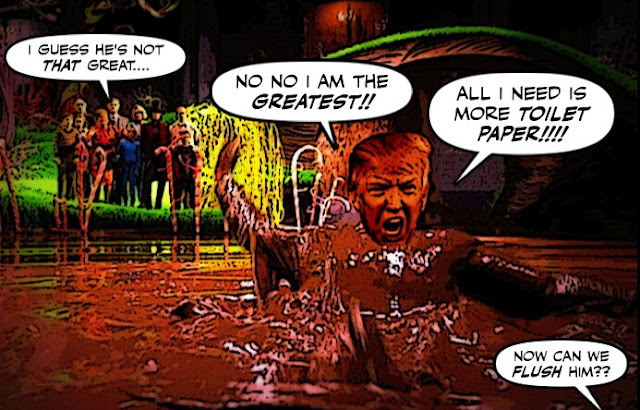 I get the idea that the rich supporters are just as deplorable as any other plus they have all the social awareness of the aristos of the ancien régime or the Russian nobility before the October Revolution.

Perhaps Trump is not really an aberration so much as just a bit brasher, which is a frightening thought.

i'm glad you are calling it like this, simon, because i am really not seeing what hillary is apologizing for. she never should have.

hillary apologized because she has the balls to hope (and be decent) while nothingness is threatening to eat away our very world... and the media, rather than writing about what she said and why, prefer to allot time and place to see what trump thinks about it. such swamp!

how do we reconcile a hegemonic power with a nation that is not interested in the world?
how do we live right and well without love?

The US political system has degraded from the game of Good Guy-not so Good Guy to Bad Guy - Crazy Guy and is sliding towards Totalitarian Guy.
The slide started when political spending caps were circumvented allowing special interest groups to seriously influence elections and resulting policy.However it really accelerated with the covert trade war between China /Asia and the west. China adopted a policy of "beggar thy neighbor" by selling low cost goods and extending unlimited credit to keep the goods flowing.No longer weighed down by the production of consumer goods the US seized the opportunity to expand its military capability and global presence with the aim of world domination by proxy.On the surface perhaps not a bad deal for the US, China got tons of freshly minted electronic credit and the US got unlimited war machines and practice games.I don't know about the Chinese but unfortunately the average US citizen got nothing! And here we are; crazy on one side,a fading mirage on the other and a very difficult unpopular path somewhere in the middle.
RT

Trump is awesome. He's letting people like Leitch and now Clement push the Con party as far right as possible. It won't be long now before we launch Operation Soap all over the country, and this time no prisoners.

hi jrk...thanks for that link, it's truly an amazing and horrifying story, and the thought that Gennifer Flowers is a Trumpette is enough to make me swoon. It really is the end of the American Empire. So much for Trump as a man of the people. Greedy capitalism has corrupted them, and will bring them all down...

hi Luce...I don't think that Clinton should apologized, for she is only playing into Trump's hands. But as you point out our side is more decent than them, and we are always making the mistake of confusing Cons with people, when they are really beasts. When will we ever learn that to destroy them you must be as brutal as they are?

hi RT...yes the road to totalitarianism has been a mixture of nativism, and catastrophic economic incompetence, aided and abetted by the flawed system itself. And least not forget the imperial overreach which brought down the Roman empire and now threatens to do the same to the American one...

hi anon...I've never heard of Operation Soap, and had no idea that Cons ever bathed themselves. But yes, to paraphrase the right-wingers, by the time we've finished with them they will be so shrunken, we'll be able to drown them in a bathtub...

Your not American. You don't vote ......shut you bigot mouth.