The Donald Trump Show and the Madness of America 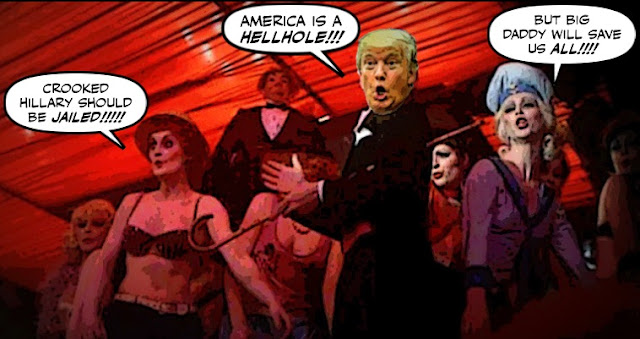 The more I watch the Donald Trump show, the more it reminds me of the movie Cabaret, before the Nazis took over.

Because by now it's beyond crazy even by the standards of America. And this seems to me to be madness.

Donald Trump and Hillary Clinton start the race to November 8 on essentially even ground, with Trump edging Clinton by a scant two points among likely voters, and the contest sparking sharp divisions along demographic lines in a new CNN/ORC Poll.

For although Hillary Clinton must share some of the blame, for spending the entire month of August fundraising, instead of campaigning.

So must many in the U.S. media.

For covering the campaign like a reality TV show.

Allowing Trump to call Clinton "crooked" without pointing out his mind boggling history of corruption.

The truth is that you’d have to work incredibly hard to find a politician who has the kind of history of corruption, double-dealing, and fraud that Donald Trump has. The number of stories which could potentially deserve hundreds and hundreds of articles is absolutely staggering.

And by so doing framing the campaign in a way that couldn't be more absurd, or more dangerous.

Trump is supposedly the crazy/bigoted one, and Clinton is supposedly the corrupt one. Once we decide that those are the appropriate lenses through which the two candidates are to be viewed, it shapes the decisions the media make every day about which stories are important to pursue.

Most polls still show Clinton ahead, and still holding a large advantage in the electoral college.

Trump's shameless stooge Rudy Giuliani did reveal that when his boss claimed the question of who would pay for The Wall didn't come up during his meeting with the Mexican president. 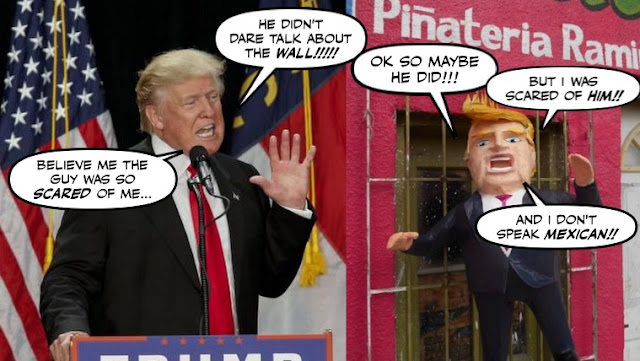 Speaking on CNN’s State of the Union, former New York Mayor Rudy Giuliani, who accompanied Trump on the visit and was in the room during the meeting, said ground rules had been set prior to the discussion and advisers to the Republican presidential candidate and Pena Nieto’s team had agreed the cost of the wall would not be part of the conversation.

Giuliani acknowledged that the subject nonetheless was brought up by Pena Nieto.

So Clinton will be able to use that against him, to portray Trump as a weakling AND a liar.

While also using the $143 million she raised in August, to bombard him with attack ads like this one...

And portray him as a maniac, and a man too dangerous to be president.

And in other good news, although Phyllis Schalfly the ghastly anti women's rights campaigner and miserable homophobe, who once said this... 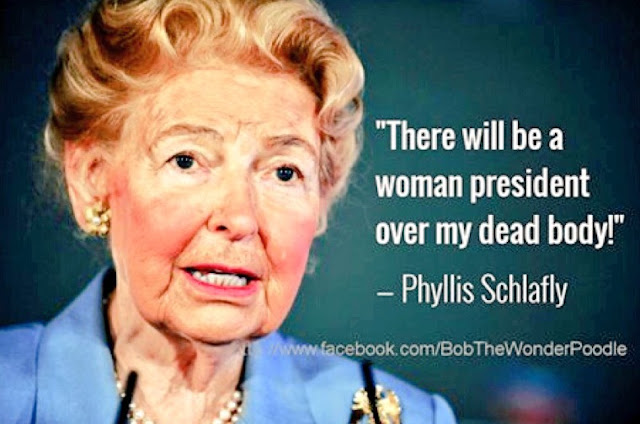 Did just publish her book, The Conservative Cause for Trump.

It was over her dead body.

Praise the Lord, and pass the champagne. 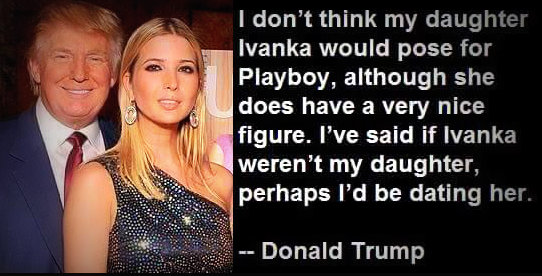 Was caught stiffing these little cheerleaders... 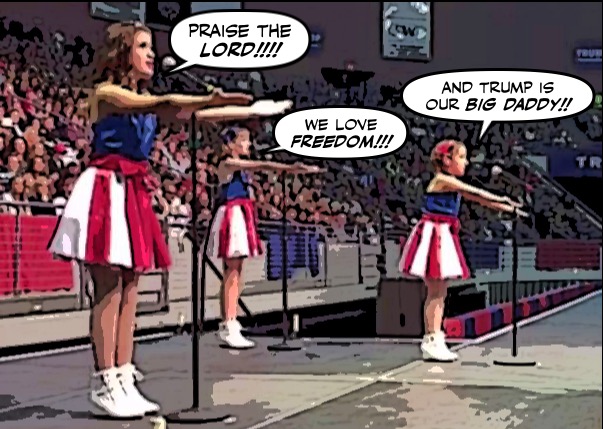 Who famously, or infamously, performed for him at a rally in Florida in January.

But are now suing him.

The pre-teen dance troupe that briefly became a national sensation after they performed for Donald Trump are suing the self-proclaimed billionaire’s presidential campaign for stiffing them.

The USA Freedom Kids said in a newly filed lawsuit the Trump campaign broke verbal agreements for performances at two events and refused to pay even a $2,500 stipend for the group’s travel expenses.

And doesn't that just about say it all eh?

You know, I dont think I'll ever forgive my American friends for scaring the bejesus out of their neighbours with that never-ending nightmare.

But if they truly value their freedoms, I suggest it's time for them to put on their steel-toed boots.

Kick the living daylights out of Trump's reputation.

And send that corrupt hog to the place where he truly belongs... 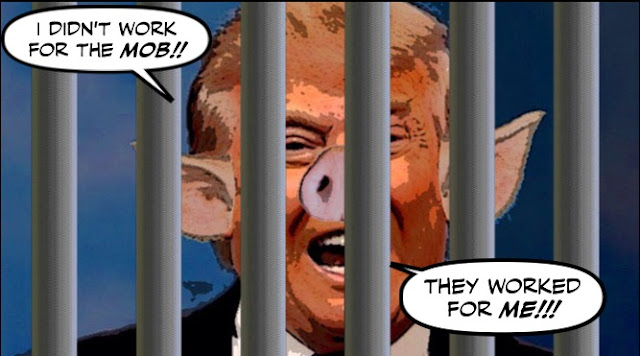 Labels: Donald Trump, Hillary Clinton, The Madness of America, The Race for the White House

It is hard to fathom how the USA ended up with the Republican and Democratic presidential candidates it currently has. When voters' choice seems to be "the one I dislike the least" one has the impression that there is something wrong with both parties.

I am not all that impressed with Hilary Clinton and she seems in Canadian terms a bit to the right of Steven Harper, but she seems a bit more than marginally sane while Trump does not.

Trump is a climate change denier as well as anti-vaccination look and a birther. Anybody know who he thinks blew up the World Trade Center?


I do think, from the little I know about Clinton's campaign is that beside attack ads she needs to sound a bit more enthusiastic about her own platform. It seems to be a mélange of her policies and Saunder's and needs some determined selling.

I found it ironic that you've got Trump behind bars and not a word about how corrupt Hillary is. Are you aware of all her scandals over the years Simon, or do you just choose to ignore them?

I hear Mansbridge is retiring, perhaps you should apply for the job. The CBC loves leftist shills.

People who have nothing to hide don't smash phones with hammers.

Out of 350 million people this was the best they could do? ~GS

Smart people tend to look at the evidence that is presented, not the emotive "she must be guilty because the internet says so." I dislike Hillary, she is a war monger, and likely a war criminal, but she hasn't been found guilty in a court of law of a criminal offense nor has she been charged AFAIK, so all talk of her scandals and illegal activities is more conspiracy theory. If there was enough evidence to arraign her, do you not think the Reps in Congress and Senate would have demanded that, rather than simply imply wrongdoing after several investigations? ~GS

Great post! Hilary has made some mistakes, but really...your first video above says it all.

On another subject, I thought of you today when I heard that the Umbrella Movement in Hong Kong won some seats in their election. One newly elected Umbrella is 23. Anyhow, I remember that you had posted that lovely Umbrella Movement video. I had never heard of them until you posted that video. Thank you.

Hoping that we have some relief and celebration in our neck of the woods in November.

hi jrkrideau....Clinton is at least more socially progressive than Harper ever was, and a greater defender of women's rights, gay rights, etc. And definitely saner than Donald Trump. But you're right, she definitely needs to project a more positive image and sell her own platform better. For as we know from what we witnessed in this country, attack ads alone aren't enough to win an election...

hi anon 12:35...I have made it clear many times that I find Hillary Clinton to be a less than ideal candidate. But she is not a racist or a misogynist, she is eminently qualified to be President, and her little scandals pale in comparison with the sordid record of Donald Trump. And no, I don't want Mansbridge's job, the CBC is far too right-wing for me... ;)

hi anon....actually I know people who do that because it's a sure way to avoid someone getting hold of their bank accounts etc etc. The so-called e-mail scandal may have been bad judgement, but it's over hyped and as the FBI made clear there's nothing criminal about it....

hi GS....well of course that is the bigger question. It is the worst choice I can ever remember, and never have two presidential candidates been so unpopular. Which is scary, but Clinton is definitely the lesser evil....

hi TS....I'm glad you liked the post. And I hope that as the election progresses the differences between Clinton and Trump become clearer, for if they do Trump will be defeated. And thank you for reminding me about the Hong Kong story, and inspiring me to write a post about it... :)

hi Kirby...yes, that's brilliant, I like that comparison too. And despite the bleating of many of Trump's hapless stooges, they wouldn't like Pottersville or Trumpsville either....

Fact is that Hillary has more baggage than any presidential candiate in history and you cant ignore the dollar signs, its in the billions. I am also sure that the Donald would use the office to actually make a billon or a trillion whatever he could get away with. If this movie does not predict the future of America I would be hopeful.