Why Donald Trump Has Just Destroyed His Own Campaign 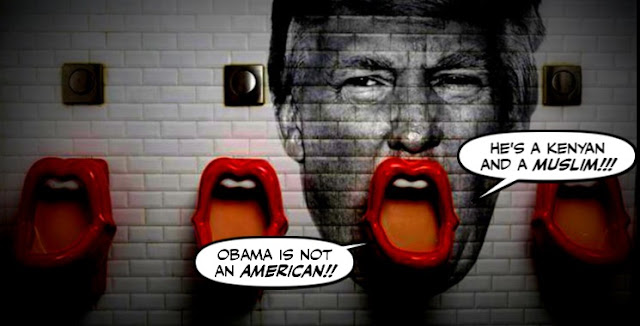 In my last post I predicted that Donald Trump's so-called birther campaign would do him enormous damage.

By finally exposing him as a dirty old crackpot.

But now I'm sure it will destroy him. 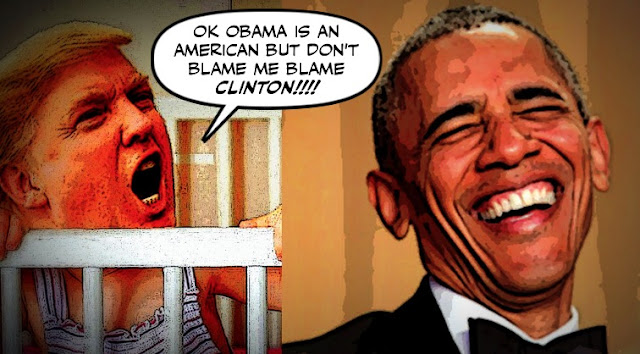 For while he has finally admitted his slanderous racist campaign was just a Big Lie.

Donald J. Trump publicly retreated from his “birther” campaign on Friday, tersely acknowledging that President Obama was born in the United States and saying that he wanted to move on from the conspiracy theory that he has been clinging to for years.

He hasn't apologized, and he has compounded one Big Lie with another.

Mr. Trump made no apology for and took no questions about what had amounted to a five-year-long smear of the nation’s first black president. Instead, he claimed, falsely, that questions about Mr. Obama’s citizenship were initially stirred by the Democratic presidential nominee, Hillary Clinton, in her unsuccessful primary contest with Mr. Obama in 2008.

And by so doing has ensured that the birther issue won't go away.

The media won't let it die.

There is no record that Clinton herself or anyone within her campaign ever advanced the charge that Obama was not born in the United States. A review by our fellow fact-checkers at Factcheck.org reported that no journalist who investigated this ever found a connection to anyone in the Clinton organization.

They will use it like a weapon against him until the day of the election.

And needless to say so will Hillary Clinton.

The truth cannot be denied. Donald Trump has revealed himself to be a crackpot, a coward, and a liar.

And he has mortally wounded himself. 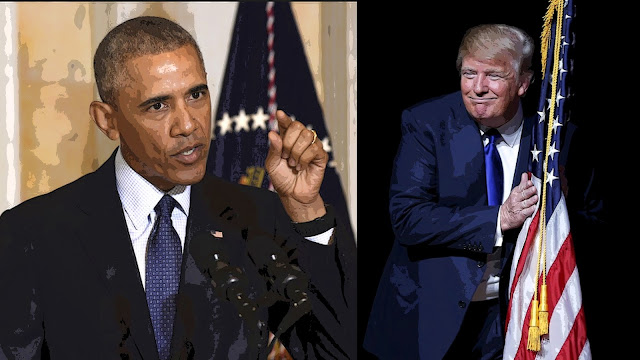 Who as I pointed out yesterday is more popular now than the day he was re-elected.

And against the great Obama that dirty old man doesn't stand a chance.

We finally have him where we want him.

This is a list of things Trump said Thursday

If Trump becomes president, American corporate media's failure to call Trump out on his lies will have greatly contributed to it.

I doubt the Birther thing will destroy Trump, just as the "deplorables" attack had failed to increase the support for Hillary.

In fact, combined with the way the Hillary campaign had misled the public on what had caused her stumble and near collapse last week, I suspect the attacks on Trump had actually backfired spectacularly.

In the latest 4 way national polls (i.e., including the 2 third party candidates), FOX, CBS/NYT, and Rasmussen all have Hillary and Trump statistically tied. In a 2 way national poll (without the third party candidates), the LA Times poll released today has Trump ahead by +6 points. Trump is also statistically tied or slightly ahead in some swing states.

No question Hillary has lost the "landslide" the MSM was proclaiming, at least if the election were held now (things can of course change drastically after the debates).

BTW, there are actually 2 different issues: (a) the "birther" issue(i.e., the rumor that Obama was born in Kenya), and (b) the "Obama is a Muslim" issue. They should not be confused as the same thing.

Most non Trump supporters now accept that Trump, not Hillary, was the originator of the false narrative that Obama was born outside the U.S. Fact checkers have also pointed this out. However, in regard to the second issue, there is evidence that it had actually originated with the Hillary campaign when she was running against Obama for nomination in 2008. According to Politifact, Judy Rose, the volunteer campaign Chair for the Hillary campaign circulated an email claiming that Obama was a Muslim. Although the official Hillary campaign disclaimed Rose's action (Rose did resign after the circulated email became public knowledge), that was apparently how the rumor that Obama was a Muslim was started. Go look it up at Politifact.

You must have seen Powell's leaked emails calling Trump a "national disgrace" and "international pariah". However, he also said that Hillary had "unbridled ambition", was "greedy" and had a tendency to screw up everything she touches with hubris.

No surprise that Hillary is struggling to beat Trump. As Assange put it, it is a choice between catching gonorrhea or cholera.

ah, you so often make me feel good, simon, but this time i'm not just gonna think it, im also gonna say it: thanks for your writing - for your perspective, your zaaz, your presence, your time, your humour, your heart...

i think it may have always been this way - to let trump get his time but ensure that the last 100m is run by the winner. i do not accept that the American intellectual and political elite (people like clinton, seasoned public servants, capable of compassion and moral judgement, even if unflexed, at times) have been sitting idly, watching all this unravel on its own. the second picture of this post describes perfectly the child who must be treated with outmost sensitivity (oh, but this must have been easier than we can imagine, since trump wouldn't know subtlety if it hit him). but the trump phenomenon is a social fact and will cause a clash of sorts either way. directing history in this way, seems to be the best way to silence and dismiss the child and mitigate the trump ripples that will be felt among the american People, no doubt.

am i suggesting the election is rigged or pre-ordained? maybe not, though i'm not sure why that would be impossible. what i am doing, though, is hoping (like you simon) that there are more of those who have something worth fighting for.

i chance a view of month and a half of gaffes, blueppers and lack regarding the trump camp and focus on issues, strategies and possibility of the clinton side. playing a role in mitigating internal security issues is the only way the u.s. media can partially redeem themselves for their coverage of this election.
cheers and thanks again. luce

hi David...yes it is quite a list, and if Thursday was bad, Friday was even worse. And I think that the Angry Orange is finally being peeled...

hi anon...yes, as I have said before it's not an ideal choice. But the birther issue will help Clinton for it is aimed at a popular President, it's something that does make Trump look like a crackpot and a liar. And it doesn't really matter in what swamp the birther campaign spring from, since Trump has been running with it for the last four years, and it is what made him so popular. But the most important thing is that what Clinton lacked the most was the enthusiasm of the Obama coalition, and Trump has just hated that to her on a gold plate...

hi Luce...thanks for your kind words, although I don't really deserve them. I'm just naturally optimistic, believe in a better world, and no reactionary or fascist on earth could ever discourage me. It is a scary election, for Trump has hitched a ride on a wave of legitimate discontent. But the media is finally starting to cover the campaign seriously, and no sane person could ever believe that Trump is the solution to America's problems. Give him enough rope and he will destroy himself...

Anon 5:29 said: "Most non Trump supporters now accept that Trump, not Hillary, was the originator of the false narrative that Obama was born outside the U.S. Fact checkers have also pointed this out. However, in regard to the second issue, there is evidence that it had actually originated with the Hillary campaign when she was running against Obama for nomination in 2008."

But that is like saying because someone with the Hillary campaign poured a teaspoon of water into a cup, Hillary and her campaign are responsible for all the water that Trump himself poured into the cup to make it overflow!

LEWANDOWSKI: What factual basis do you have that it's not true?

LEMON: So, fine. Let's just say that you're right. So, then beyond that, why keep going with it when you say that -- you say it's from Hillary Clinton campaign, if you know it's factually not true, if he knew today, if he knew in 2011, when the president finally produced his long-form birth certificate, why keep perpetuating the lie?

LEWANDOWSKI: Look, the clear differential here, and it's very, very important, is that Donald Trump didn't raise this issue. It was raised by Sidney Blumenthal.

LEWANDOWSKI: And then what Donald Trump said today...

JONES: Off the record.

JONES: Here's the problem, Corey. Even if you are right, you are -- it's irrelevant.

JONES: Here's what -- I'm going to agree with you, Corey, I'm going to say, you know what, if on the facts, is it likely that a Clinton operative try to plan something?

At some point you've got to make a responsibility for your own candidate decision-making. And the fact that the only thing you can now is to continue pointing back and pointing back to somebody that nobody's even heard of cares about to justify your candidate's behavior shows you that he has nothing to stand on.

And it's sad that you guys just won't admit that, yes, guess what, he saw an opportunity to demagogue and to undermine someone who is the commander-in-chief of our military and the president of our country and the saw political advantage in it. He took it as far as he could and it's no longer politically advantageous for him so he dropped it. That's all your candidate has done. Don't blame Blumenthal for your guy.

"The campaign, nor Hillary, did not start the birther movement. Period. End of the story," Patti Solis Doyle told CNN's Wolf Blitzer. "There was a volunteer coordinator, I believe in late 2007, I think in December. One of our volunteer coordinators in one of the counties in Iowa, I don't recall whether they were an actual a paid staffer, but they did forward an email that promoted the conspiracy."

While some 2008 supporters of Clinton used Internet blogs to raise questions about Obama's birthplace, the Clinton campaign never promoted the conspiracy theories. The Clinton campaign, in fact, severed ties with a volunteer coordinator in Iowa who forwarded an email promoting the birther conspiracy, according to Clinton's 2008 campaign manager, Patti Solis Doyle.