Omar Khadr: The Last Post and the Happy Ending 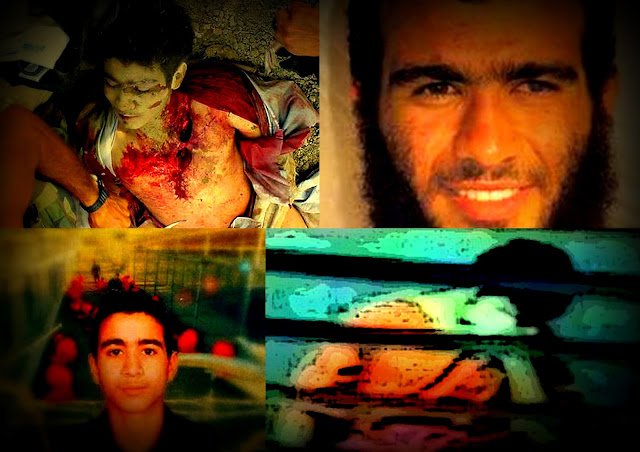 In the last nine years I wrote more than 100 posts about the case of Omar Khadr, because I considered it one of the most shameful episodes in modern Canadian history.

And could never accept that a Canadian child soldier could be tortured and jailed in a place like Guantanamo. And abandoned by his own government.

But this will probably be my last post about him.

Not because the case is over, it isn't. The federal government is still appealing his release on bail.

But because amazingly enough it seems to have had a happy ending.

Nine months ago, Khadr, 29, walked out of an Edmonton courtroom into the spring sunshine, ending 14 years in prison, four years in Canada and 10 in the U.S. military prison in Guantánamo. Since then, he has been working hard on his new life, getting to know the city, mapping out a career, adapting.

And I couldn't be happier for him, or prouder of the people of Edmonton.

Khadr doesn’t like the spotlight and was reluctant to do this interview. He just wants to be normal guy going about life, putting the past behind him.

He’s also grateful to Edmonton for its welcome and wants that known.

“I’ve had nothing but warmth and kindness from Edmonton and that reveals the truth of who we are as Canadians.”

I'm impressed by Khadr's inner strength, and by how well he has managed to survive his horrifying ordeal. 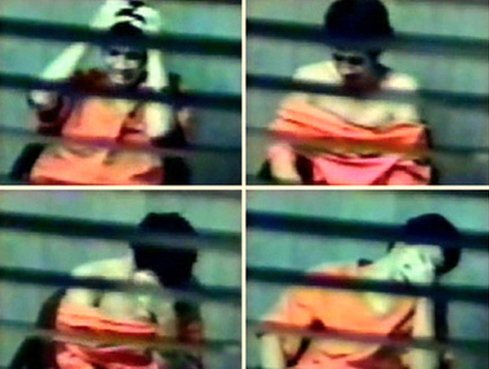 I'm glad that he is finally living again in the country he never wanted to leave. 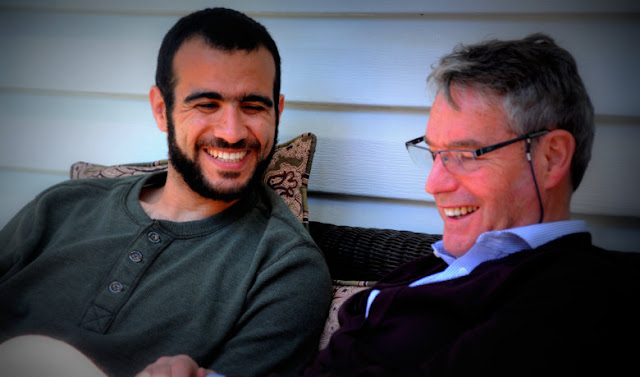 I give thanks for the decent Dennis Edney who defended him and gave him shelter.

And of course for someone like me, whose heroes are healers not killers, this couldn't be more wonderful.

Then, it’s on to a higher-skilled job as an emergency technician, working in an ambulance.

So one day he could turn up at an accident scene, treat the wounded, give CPR, save lives? “I hope so,” he says, with a quiet smile. “I like the community and the intensity of the work. I think I have a better appreciation of pain and suffering and I can empathize with people who are going through hard physical pain.”

Helping other people also helps him heal the past, he says. “The way I deal with issues is I try to help someone else and that helps me, it gives me a good feeling,” he said.

Especially after what happened to him... 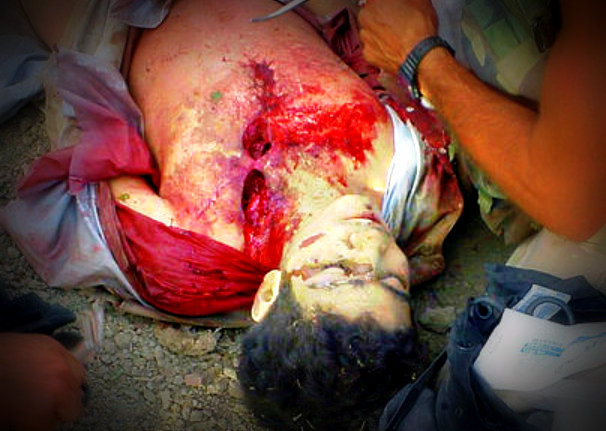 You know, I would have defended Omar Khadr even if he was a little bastard, because he was a child soldier, and it was such an absolute travesty of justice.

But to see what a nice person he seems to be, really is a bonus.

And in this last post about him, I do have to say that it both infuriated and depressed me to see so many Canadians hate him just because they hated his horrible family.

Or see so few other progressive bloggers stand up for the human rights of Canadian kid, for presumably the same reason.

I resented being made to feel like a terrorist sympathizer for just doing the right and decent and Canadian thing, even if it was not popular.

And not just because it was a case screaming out for justice.

But also because I knew that if Stephen Harper could violate the rights of a child soldier so brutally... 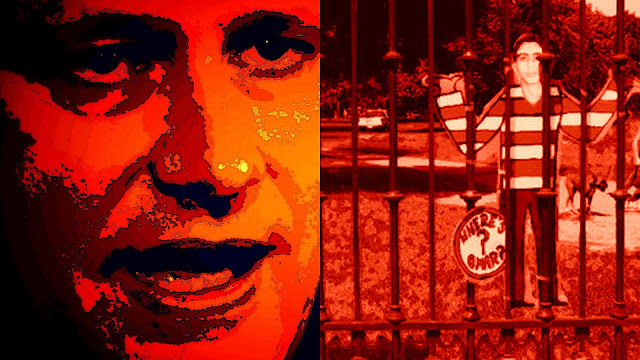 One day he would try to do the same thing to us.

Because he is a cruel, brutish psychopath, and being unable to feel the pain of others as psychopaths can't, he was capable of anything.

And all decent Canadians should have seen the Khadr case as a warning.

Omar is at peace and so am I.

The Liberals should scrap the Con appeal of his release, and work to free him as soon as possible.

So he doesn't have to spend another New Year's Eve home alone with...um...Molly.

Khadr is occasionally reminded of his conditional freedom. He wanted to go to New Year’s celebrations downtown, but also knew that was beyond his midnight curfew. The police, indeed, showed up at the Edney front door that night to make sure he was at home.

“They’ve only come twice since I got the (electronic tracking) bracelet off my ankle and one time was New Year’s Eve. I was at home with Molly the dog.”

And all that is left for me to do is wish that remarkable young Canadian the best of luck in the future, for goodness knows he deserves it.

You know, I used to enjoy seeing these words sprayed on signs along the waterfront where I live. 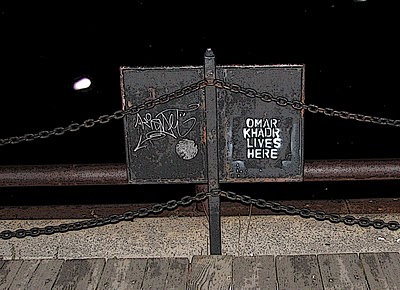 And now he really does.

Justice is a life force that tyrants may deny, and delay.

But cannot and will never defeat...

Omar Khadr | His side of the story
https://www.youtube.com/watch?v=hhzSRZfnXTA

He was used as a political scapegoat by harper and co. I wish him a great new year.

Thank you for this Simon. Hope new government drops their appeal. Whole story is so contrary to Canadian values. Dennis Edney and his family have shown such compassion for this young man.

Thanks for this hearfelt post, Simon. The sentiments you express reflect my and many other Canadians' feelings about Khadr and the mistreatment he suffered, mistreatment that was unconscionably prolonged by an obdurate and rabid Conservative government. That Khadr has been able to prevail over his suffering and injustice heartens me and reaffirms my faith in the resilience of the human spirit.

Anonymous said...
This comment has been removed by a blog administrator.
5:47 PM

Anonymous said...
This comment has been removed by a blog administrator.
5:48 PM

Hi David...thanks for the links. He was Guantanamo's child and the fact that we allowed a
Canadian child to be jailed and tortured in a place like that one should shame us forever...

Hi anon. 9:40am...yes he was offered up like a sacrificial victim to the Con's rabid base.
The Cons spent millions persecuting him for crass political purposes. I would say they should be ashamed of themselves, but they are shameless. And if there was any justice they should have been jailed...

Hi TS....You're welcome, I enjoyed writing it. After so many dark years I am so happy to see that Omar didn't just survive his ordeal he is enjoying life again. In fact, he seems to have been able to turn that ordeal into something positive, which is extremely inspiring..
And yes l am very grateful to Dennis Edney for standing up for our values, and proud that he is a Scottish Canadian. Ahem... ;)

Hi Lorne...thank you, I enjoyed writing it. That newspaper story really sent my spirits soaring. It really is an inspiring story of human survival, and more than makes us for all the anger and despair the treatment of that child soldier caused me. I had hoped for a happy ending,, but this one is exceeding my expectations. I am still a bit worried about Omar because as you can see I have had to delete some foul threatening comments.
But I admire his strength and am hoping for the best....

To the anonymous commenters spewing out their hate against Khadr, don't bother trying to do it here because I will delete them on arrival.

Can't stand something raining on your parade eh? Oh whatever happened Harper's plan to bring in the draft? No mention of that little lie now eh Simon?

A 3:27 a.m. what happened to Harper's plans, he didn't get to continue on as prime minster, that is what happened. now get over it.

I know this is several days late Simon, but I had to chime in on this one with you. This was one of those issues where we always were eye-to-eye with even before we became closer on the ultimate need to stopping Harper at all costs. I've always seen this as one of the greater blots on the honour of the nation alongside the almost certain action of turning over detainees for torture under the Harperium in Afghanistan, the letting the USA rendition Maher Arar and how long that took to get cleaned up (let alone what Harper and Stock Day were on record in the HoC saying at the time).

Like you I am pleased to find out he has from all accounts turned out to be a really decent person especially after all that was done to him first by family then by governments, but also like you I would have defended him on the grounds of being a child soldier and a citizen even if he had been a nasty piece of work, because some principles have to transcend personalities and actions/natures if they are to have any true value.

Nice finish on this matter Simon, and I'm glad for you.