Why Michelle Rempel Should Be Fired Immediately 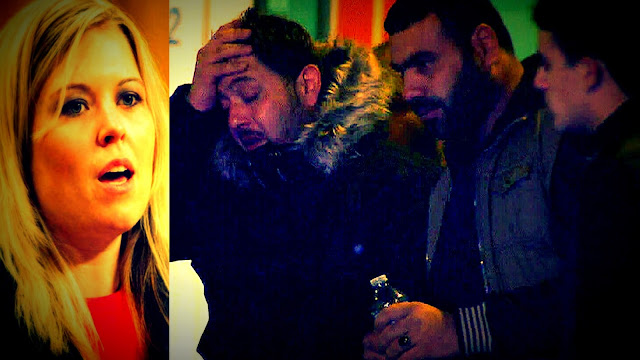 The other day I wrote about how shocked I was to see that Michelle Rempel hadn't said a word, or tweeted a single solitary line, about that horrifying pepper spray attack on a group of Syrian refugees in Vancouver.

And that even though she is the Con's new shadow minister of immigration and REFUGEES, she hadn't condemned the attack, or offered up a word of sympathy.

So today I went back to her Twitter feed to see if the situation had changed.

Only to find myself staring at this ghastly tweet.

For while it may appear innocuous, and links to yet another Rex Murphy rant about political correctness.

It is in fact just an excuse for him, and Rempel, to bring up the hottest story on the North American teabagger circuit.

The nightmarish story of mass sexual assault in the German city of Cologne... 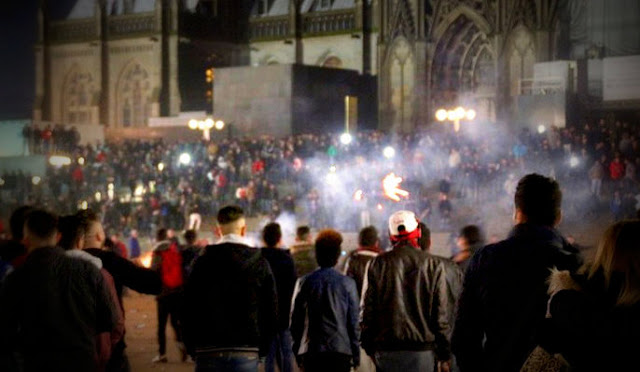 There was “a riot-like series of sexual assaults and robberies carried out on New Year’s Eve in the center of Cologne,” reads one report. As many as a thousand men, including some suspects the local police have identified as refugees or immigrants, went on a wild spree. Young girls and women were mass assaulted, surrounded by gangs, fondled, at least two claim they were raped.

“They made a kind of wall around us … They shouted, groped us, reached under our clothes and undid their pants. It was disgusting and humiliating,” one girl told the media.

Another description is equally distressing: “We walked through the group of men, there was a tunnel through them, we walked through … I was groped everywhere … It was a nightmare. Although we shouted and hit them, the men didn’t stop. I was horrified and I think I was touched around 100 times over the 200 metres.”

Which has shaken Germany to its core, is undermining Angela Merkel's open arm's policy, and her grip on power... 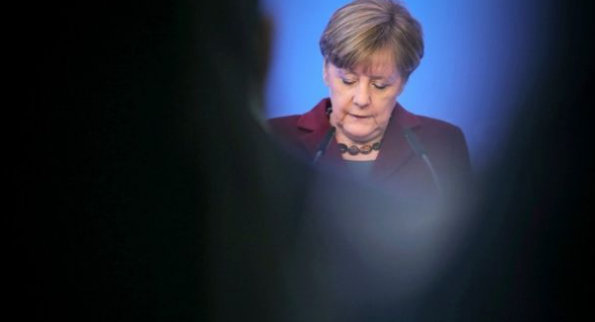 But is of course, like manna from heaven for Europe's many right-wing anti-immigrant parties and racist groups.

And here at home is being mined by the grotesque hate monger Ezra Levant with pornographic glee.

Because he knows that the idea of white women being sexually assaulted by crowds of dark skinned Muslim men is like crack to his racist supporters, and can arouse some of their basest emotions.

For that was at the heart of many of the lynchings in the American south... 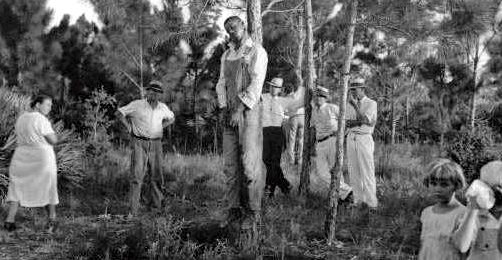 Where black men were tortured and killed for the crime of looking at a white woman, or daring to share the same sidewalk.

But here's the thing, it now seems obvious that the big mistake Germany and other European countries made, was not just bringing in too many refugees too quickly.

But even more importantly bringing in too many young men.

The issue isn’t just that immigrants are arriving in the hundreds of thousands rather than the tens of thousands. It’s that a huge proportion of them are teenage and twentysomething men. In Sweden, for instance, which like Germany has had an open door, 71 percent of all asylum applicants in 2015 were men.

Among the mostly-late-teenage category of “unaccompanied minors,” as Valerie Hudson points out in an important essay for Politico,” the ratios were even more skewed: “11.3 boys for every one girl.”

As Hudson notes, these trends have immediate implications for civil order — young men are, well, young men; societies with skewed sex ratios tend to be unstable; and many of these men carry assumptions about women’s roles that are diametrically opposed to the values of contemporary Europe.

But since that is NOT the case in Canada, where single men have been largely excluded from at least the first wave of refugees, why is Michelle Rempel tweeting about Cologne?

Instead of sending out a message condemning the BC assault.

Or heaven forbid expressing her sympathy for the victims.

And the answer is because she has never ceased trying to portray the refugees as a threat... 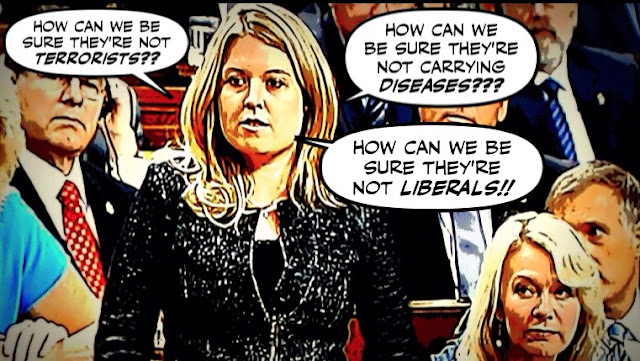 She would rather pleasure the Con's rabid base for whom one refugee is too many.

And because nowhere in her tweets, or her TV appearances, or her statements in the House of Commons, has she EVER been able to summon up the slightest shred of empathy.

So I thought I might run three very short videos to see if we might rekindle the dying embers of her humanity.

Starting with the one of the boy in a shattered Syrian town who dreams of bread...

But isn't lucky enough to be in a Toronto hotel turned into a home for refugees, where 200 of them are children, and are happy and safe at last.

No thanks to Rempel and her bigot Cons.

And then there's the one about the teenager in a refugee camp who hasn't seen his father for a year...

So Rempel can know what desperation looks and sounds like.

And finally there's the story of the littlest flutist in Istanbul...

Which along with the other videos might hopefully move most people, as they moved me.

Because like her depraved fallen leader she can't feel the pain of others... 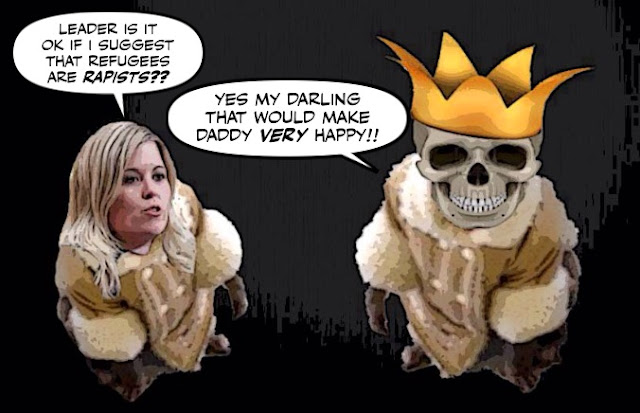 And for that alone is unfit to be a shadow minister for refugees.

And in the name of human decency, should be fired immediately...

Rempel, Levant, Rex Murphy......... They would make the three stooges look smart!!!!! Simon you cannot expect sympathy from such morally depleted idiots!!!!!!!! You would be dreaming to expect human decency from these three stooges who continue to this very day to operate without any sign of a moral compass!!!!! Such useless pieces of human flesh!!!!!!!! FP

The fact that Rempel took over a week to comment on Cologne and shortly after the assault on refugee families by the white hooded boy speaks volumes to her character. These issues will be difficult to reconcile when leadership and elections come around.

She would seem to be skating close to the line on this one. I say, let's send her a case of wine!! Maybe she'll put on her skates after a few too many, and then the RCMP can get involved.

You are judged, they say, by the company you keep. Considering the nature of her fellow Twitter-travellers, Simon, Michelle has some very dark baggage indeed that she seems quite content to hold onto.

There is another aspect to the Cologne mess that is little mentioned. Why wasn't there a police presence to prevent such mayhem? Those gatherings always attract crowds of people, yes, including young men. Not necessarily refugees or "dark-skinned people" by any means; footie riots, like our hockey riots, tend to be of young men by the dominant group. And involve excess drinking and drug use, leering and groping at the least - sometimes sexual assaults, fighting, property damage...

By the way, the Cons have no interest in sacking her. Why would they?

"I can't understand why the public authorities weren't prepared for the situation. "
Really excellent question...
Makes you wonder just what the REAL agenda is in merkel's nefarious, fascistic bag of tricks now.

Ms. Rempel has extremely close ties with the...ahem..."brain trust" of Rebel.Media and, as such, will thankfully be un-electable as Con leader when the time comes. She will never, ever say a negative word against them. So all any half-bright opponent for the CPC leadership will have to do is show a screen grab of the comment section of any "story" on the Rebel Facebook page and that'll sink her bid in about 3 nanoseconds.

Rempel's true colors are shining through when she can't even denounce what happened to those refugees in Vancouver. A 2 year old was among those pepper sprayed for God's sake and she opts to paint them all with the same brush as those involved in the Cologne assaults. She is a truly despicable person that should be fired for once again stoking anti refugee sentiment.
JD

Hi Simon! I agree with lagatta a montreal! Why would the Cons sack her when she's doing their dirty work quite well!

I don't really think Chancellor Merkel had anything to do with the police presence (or lack of it) in Cologne. If I recall the chief of police in that city was sacked after the event, for mishandling of the situation.

I'm certainly not a fan of Merkel's policies, but she isn't a fascist. There are actual fascists there, including a party with MPs called the NPD. A German friend had to explain that when she voted for the "NPD" here (NDP in French), that it was a social-democratic party, not a Nazi one!

Hand of Trump seen behind pepper-spray attack outside Muslim centre

How about criticising her about her actions and her deplorable statements, not spreading rumours about her personal habits, unless this is a) founded and b) proven to have an impact on her performance on the job (i.e. Rob Ford...). No, I don't like her in the least, but I also dislike such gossip, which is always harder on women.

hi anon...I know, I know, I believe in the power of redemption and am always looking for the Cons to change their ways. But as you point out, stooges of a feather flock together, and there's no hope for any of the above...

hi TS...you know Rempel's refusal to even acknowledge the assault on those refugees really bothers me, because once I thought she was just dumb. But now I'm starting to thinks that she's just a heartless psychopath like her fallen leader. Or she's finally realized her situation, and she is hitting the bottle. Give her a skate-o-meter test immediately ... ;)

hi Lorne...yes I'm afraid you're right. She is worse than I thought she was. And the sneaky way she tried to smear the refugees in this country is simply unforgivable....

hi lagatta...no the Cons won't fire her because they don't have a moral compass either. But she SHOULD be fired because that little stunt was evil. As for Cologne I watched a video of the night in question and it's clear the whole crowd was out of control and the police were overwhelmed. It really is unfortunate, and it has done enormous harm to the refugee cause, and to the good people trying to help them...