Dracula Harper and the Con Assault On Our Democracy 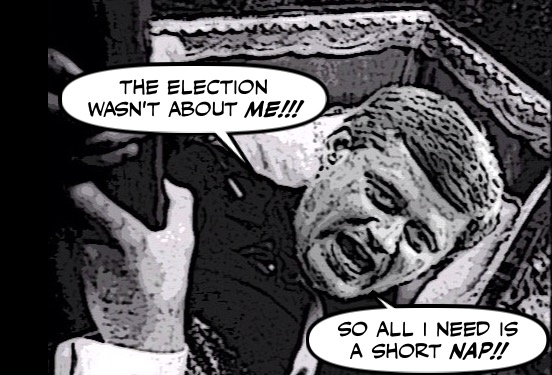 A lot of people in this country seem to believe that when we defeated Stephen Harper we sent the Con vampire to his political coffin, with a wooden stake through his heart.

But they couldn't be more wrong.

The monster may be hiding in the shadows, but he's very much alive, or undead.

And the Cons are still the Harper Party... 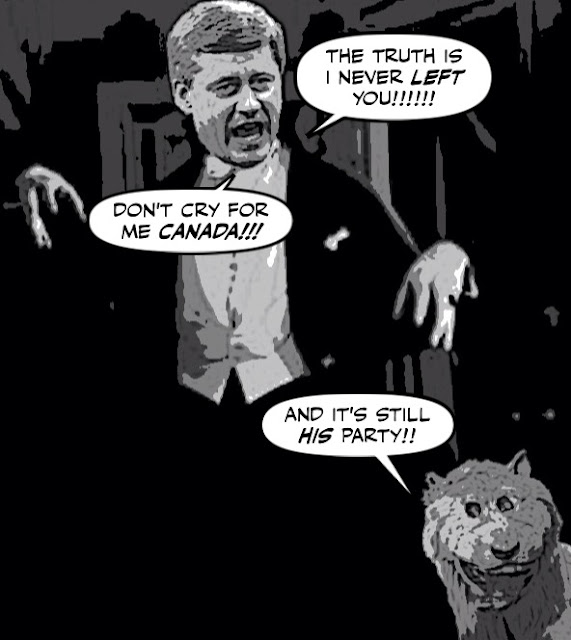 For what else can explain that his designated tool, Rona The Vulture Ambrose, is still attacking our democracy like Harper did.

First by threatening to use the Con Senate to block any attempt to change our electoral system without a referendum.

And now by threatening to use the same Senate stooges to stop the Liberals from repealing some foul anti-union laws.

The new Liberal government is set to reverse controversial labour laws passed by Stephen Harper's Conservatives in the last Parliament, but the Tories are already signalling they could use their majority in the Senate to block passage of the legislation.

Which couldn't be more outrageous or more fascist,

And since it was Stephen Harper's favourite bill. The one he suckled the most.

Along with his anti-union baby Pierre Poilievre... 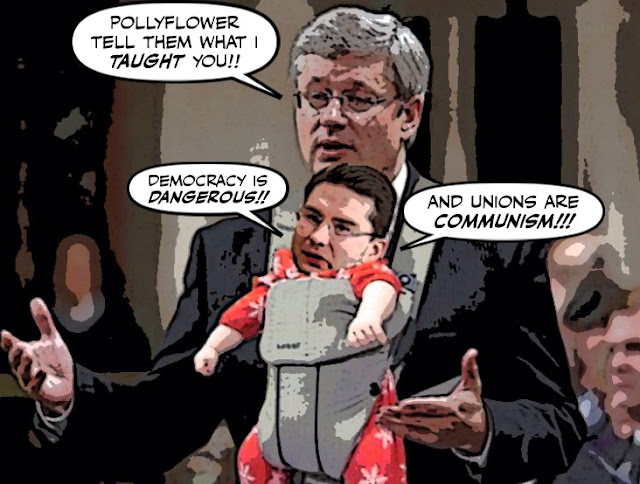 There can be no doubt now who is still running the Harper Party.

Or as Michael Harris writes, no doubt that the Con chickens are coming home to roost.

It must be all the Kool Aid. You’d think that, by now, it should have dawned on the Conservative Party of Canada that it has more than a public relations problem in the post-Harper era. What it has is a full-fledged brand meltdown.

Every party can live down a dud — eventually. But there is so much more afflicting the CPC than Harper’s image. It’s the flock of chickens coming home to roost, the accumulating guano of Harper’s astonishing incompetence, and his disregard for the well-being of Canadians.

Since the election we have discovered that Harper stacked the National Energy Board with a slew of last minute patronage appointments.

And that he allowed CSIS to gather confidential information from his chosen instrument for punishing his enemies, the Canada Revenue Agency, without a warrant.

So that there can also be no doubt where he was planning to take this country... 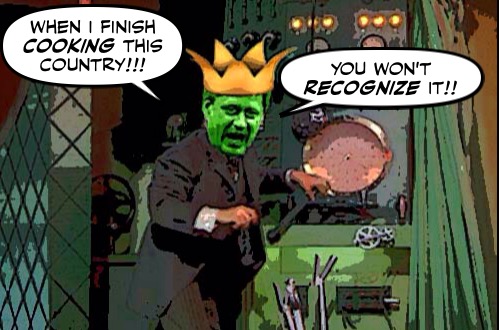 It was once said of The Wizard of Oz that the straw man was stupid, the tin man was heartless, the lion was cowardly and the wizard was a liar. Not a bad description of the Conservative party.

Or what kind of a party we are dealing with now.

One that is refusing to recognize the result of the election, is treating our Parliament with contempt, and is determined to try to destroy Justin Trudeau's government by whatever means necessary.

You know I find it hard to believe that so many progressives could be fooled into thinking that the Battle for Canada is over.

And that the track to a better future is now clear... 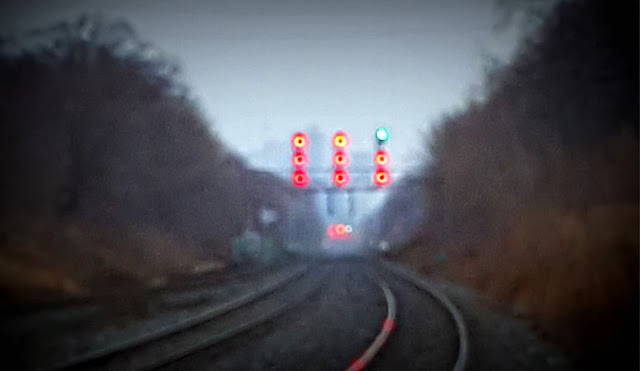 When so many lights are flashing red.

But the Cons ARE trying to steal our country again.

And neither it nor our democracy will be safe.

Unless we fight fire with fire, until we can bring in electoral reform.

And demolish the Harper Party forever... 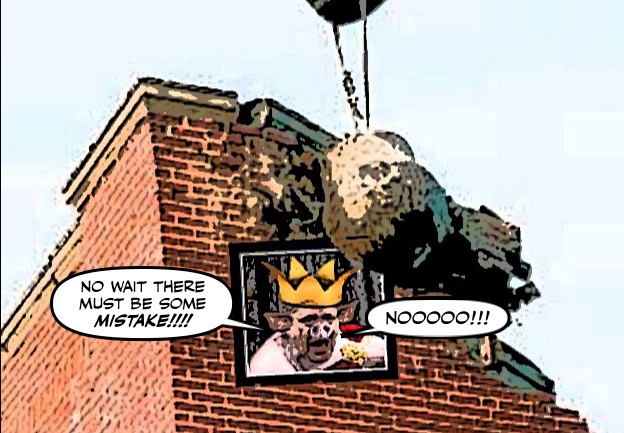 HarperCat, HarperCat
Flies to Florida wearing a cap
Hides in closets, any size
Left the Commons
And he lies
Bye-bye! There goes the HarperCat.

Will be interesting to see if the Senate does its job or is still a partisan proxy for the Cons.The one aspect of the bill that seemed sensible was the requirement for a secret vote in the event of union certification and decertification.This removes the intimidation factor which does happen in certain instances. Its ironic that the Cons would worry about intimidation in unions while seeing nothing wrong with intimidating Senators to do their bidding. I would sooner have taken my chances with the Quebec construction union and the biker boys than with Harper at his peak.Ask Duffy!
RT

I have looked into aHarpers background, back to his days at the U of Calgary. Seems he developed a hatred for the Liberalmleft and democratic institutions from the outset. He believed the bureaucracy was the enemy. He was determined before taking office to " change the face of Canada" by every means, legitimate or otherwise. There were few facets of Democracy that he didn't challenge, attack aand destroy as best he could.

That's why Harper ignored true consultation in virtually every aspect of his regime. Trudeau isn't afraid to meet premiers, First Nations, etc. Harper truly was a party of one and was more about control than anything else.

Yeah, let us see how the Little Prince fairs when group after group come to blackmail him for money.

Decided to tweak the song a bit (to the tune of Spiderman theme):

*
HarperCat, HarperCat
Skulks to Florida wearing a cap
Hides in closets, any size
Left the Commons, and he lies
Down on the job.
There goes the HarperCat.

To him, life is a great big Con job
Wherever there's injustice
You'll find the HarperCat.

hi Jim...don't worry, even though the Cons have been defeated I continue to watch them like a hawk. For they can still cause trouble, and I don't trust them as far as I can spit...

hi David...that's excellent, and you do have a talent for writing. Now please write some music to go with it, and I'll play it on my guitar or sing it in the shower. I don't have a very good singing voice, but in the shower I'm a star... ;)

hi RT...yes it will be interesting to see whether the Senate goes along with Ambrose, or whether as some Liberals believe, they will act more responsibly if only to try to improve the shabby reputation of that discredited institution. What I find most egregious about that anti-union law is that it duplicates much of what already exists, and would require unions to do what business is not required to. So it's basically unfair, and mostly designed to appeal to the Con's rabidly anti-union base...

hi Jim...that's interesting, for although I have looked into his university and high school background, and even read his Master's thesis which was so boring I had to remember to keep breathing, I don't know why he became so anti-union. So I have to think that it had to do with his overriding desire to destroy things rather than build anything original. For anyone who tries to destroy the student council in high school AND university clearly has a problem in that regard...

hi David...yes, in fact his bizarre behaviour since he left office seems to indicate how vulnerable he feels when he isn't in complete control. I'm sure there's a specific psychiatric name for that condition, But to me it's looking more and more like plain old paranoia...

103. "Bill C-377 will require unions to publicly disclose any spending of more than $5,000 -- naming both the payer and payee -- and the salaries of any members earning more than $100,000, all to be publicly posted. It will make unions more transparent, like our government."

Just sing it to the tune of the Spiderman theme. Maybe I should write more verses for a complete song.

The Calgary School shaped the political direction of the Reform Party, Reform Party and Conservative Party of Canada and dominated the thinking of Harper, who studied under Calgary School professors. Later, as prime minister, Harper selected Flanagan as a close adviser and Ian Brodie, a student of Morton's, as his first chief of staff.

hi David...if the unions are to be made as transparent as the Harper government, all they have to do is draw the blinds, put out the lights, and refuse to release any information. I remember hearing the little corporal Pierre Poilievre say those very words, and almost falling off my chair laughing....

hi Liberta...yes it is a good article and Climenhaga is right. It does show who is still running the Harper party...