Stephen Harper's Recession Nightmare and the Return of Pamela Wallin 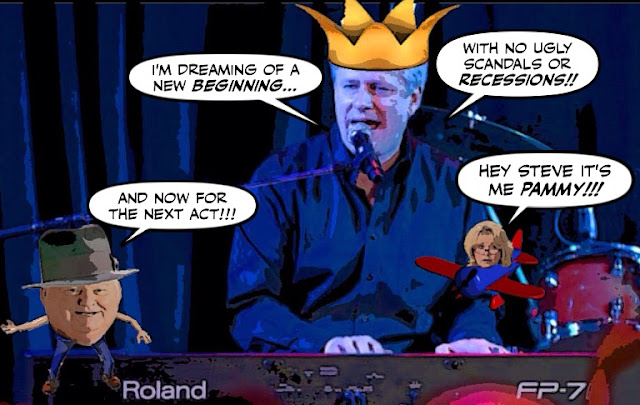 The timing couldn't be worse. Just when Stephen Harper thought he had escaped the stench of the Duffy scandal, and could now focus all his efforts on posing as a Great Economist Leader.

The economy is turning into a living nightmare.

He's having to twist himself into a knot, or a Tim Hortons' kruller, to avoid using the word "recession." 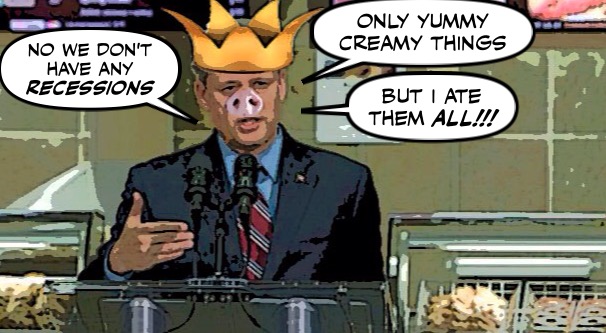 Conservatives are distancing themselves from their own definition of a recession on the eve of a key Statistics Canada report that will show whether the country’s economy shrank for a second consecutive quarter.

“It’s more important to describe the realities of the situation, rather than have labels,” said Mr. Harper in French on Monday after a rally in Ottawa.

While claiming that whatever Stats Canada decides today, will be just a mild "contraction" not the unmentionable 'R' word.

Even though there can be no doubt that his oily obsessions have led us to disaster.

No doubt that his failed policies have cost Canadians hundreds of thousands of good jobs.

Almost no doubt that the only contractions are the ones he's been having, at the thought of delivering his second recession... 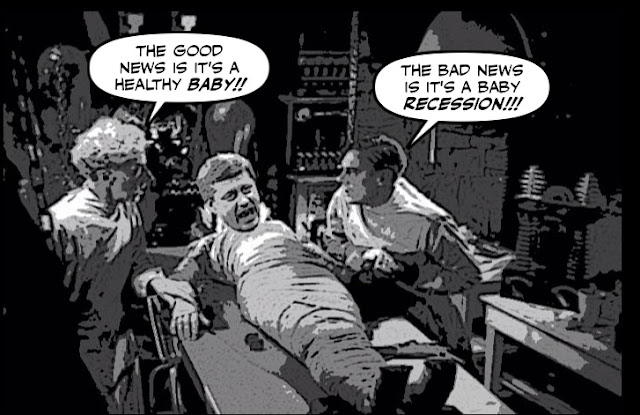 And of course absolutely no doubt that with the worst economic record of any Prime Minister since the end of the Second World War, he's no Great Economist Leader.

Which as I pointed out in my last post, he more or less admitted yesterday in a hilarious manner.

When he told the employees at that Tim Hortons not to let him anywhere near the cash register...

For obvious reasons. Any customers who paid Harper would have to spend the next twenty minutes counting and recounting their change to make sure they hadn't been cheated or robbed.

And if all of that wasn't bad or scandalous enough.

Here comes Pamela Wallin flying back into the headlines. 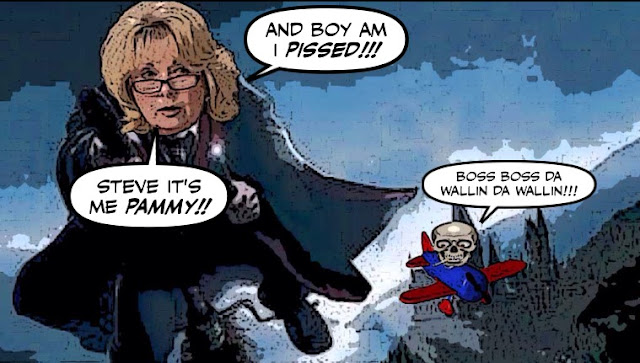 After an 18-month investigation, the RCMP has handed their file into Sen. Pamela Wallin’s questionable expense claims over to Crown prosecutors, CTV News has learned.

The possibility that charges could be imminent comes as Stephen Harper is seeking re-election to the country’s top office – and facing a campaign trail where the Senate expense scandal has already been a major topic of discussion.

Which could if Ol' Pammy is charged, be a double blow for Great Leader.

For it would not only bring back the stench of scandal and remind Canadians yet again of Harper's abominable judgement.

It would also remind them that he was the one who PERSONALLY approved her expenses.

“I looked at the numbers,” the Prime Minister said on Feb. 13, 2013. “Her travel costs are comparable to any parliamentarian travelling from that particular area of the country.”

So either he can't count.  Which won't help his already tattered reputation as a money manager. 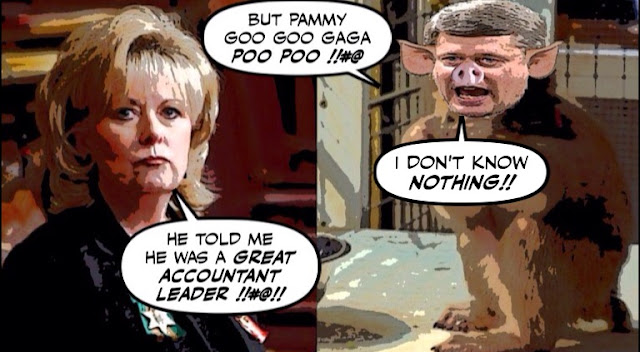 Or he's a lying Con artist, and an increasingly desperate monkey leader.

Which I'm sure you'll agree, would at this stage in the campaign, be almost certainly fatal.

He might be able to run away from his ghastly economic record.

But if hit by both at the same time... 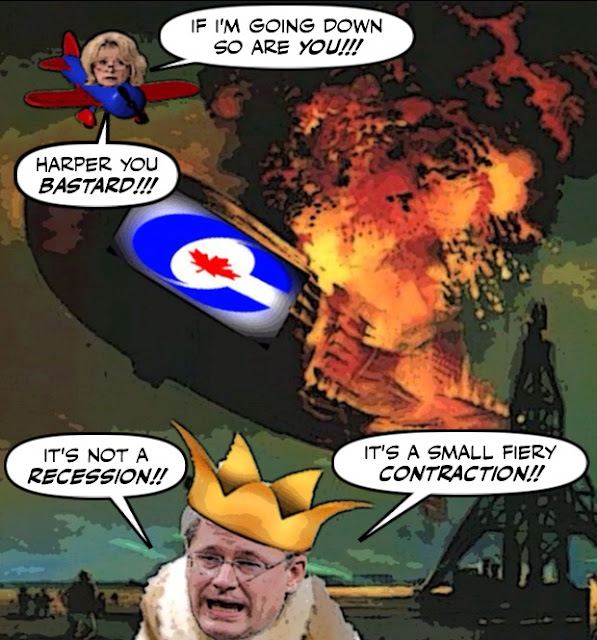 They will almost certainly destroy him.

Funny how Mr. Smear Everyone All The Time no longer wants to talk about simplistic "labelling."

I made a mistake this morning. I put the garbage out on recycling day. I have got to stop thinking about Slithery Steve.

So no charges until after the polls close.

The recession is real, and deepening.

I agree. It's been that way since Zacardelli did his dirty deed. Any RCMP who does a high profile pro-Harper deed is instantly promoted so there is every incentive to continue being OWNED by the Harperman.

The RCMP have turned the file over to the Crown. Its the Crown who decides. Now if the Crown takes too long, that on its own will generate a lot of negative press. But fear not, we have the Bruce Carson trial coming up in Sept. Sort of a birthday present for some of us and another set of questions Steve will have to dodge.

Wallin will take it well if she is charged and we can expect her to be way more vocal than Duffy. Wallin came up in the news business when there weren't many women. I'd suggest she is way tougher than Duffy and won't hesitate to go for Steve's throat is she thinks her standard of living is going to be lowered.

Iglika Ivanova from the Canadian Centre for Policy Alternatives points out 3 serious issues revealed in the StatsCan numbers.

1. Business investment is down for the third consecutive quarter
2. A number of key economic sectors are in decline, not just oil and gas
3. Household debt is on the rise as disposable income declines in the second quarter of 2015

It is clearly obvious that the Temporary Foreign Workers were given the day off at Timmies. Or maybe sent out to empty garbage parking lot drive through detail. Ya'll come back tomorrow when the franchisee's buddha is no longer in the house. Service will return to normal. Canadian Icon; snark.

Oh, the irony! Harper said at the Tim Hortons photo-op:

"Tell me what to do, just don't let me handle the cash."

hi thwap...yes, isn't that ironic...or pathetic. He really does think that the truth is what he says it is. And if he doesn't say it, it doesn't exist. We're in the grip of a maniac. But you and I agreed on that a long time ago. It's the others I'm worried about...

hi rumleyfips...I don't blame you. It's hard to think about Harper and not think about garbage. Hopefully he'll be on his way to the recycling plant to be turned into something useful.... ;)

hi anon... 12:04 pm I hope you're wrong. But I am interested in knowing why the RCMP has taken so long, and whether the Crown will take its sweet time. Because I don't trust the Con Justice Department either....

hi anon 12:12...it's either a recession, or the economies stalled which amounts to the same thing. Too many people are losing their jobs for it to be anything else. They can argue about how many deficits can fit on the head of a pin, but the truth is the truth...

hi anon 7:36....thanks for that link, and yes, the facts speak for themselves. Only in in this Orwellian harper land could they mean anything else...

hi e.a.f... As I said above I'm am curious to see whether the Crown acts promptly or tries to stall until after the election. But you're right, the Bruce Carson trial will help pass the time and should be very entertaining. Just remember never to say Carson without saying Harper... ;)

hi anon...yes I wondered about that myself. Were they all laid off the day before Harper came visiting. Or whether they were all in the back shivering in the freezer...

hi David...yes wasn't that a great line. And on video. I saved it for use at a later opportunity. It couldn't be a greater epitaph for Great Economist Leader...