Another Great Video And Even More Reasons To Stop Harper 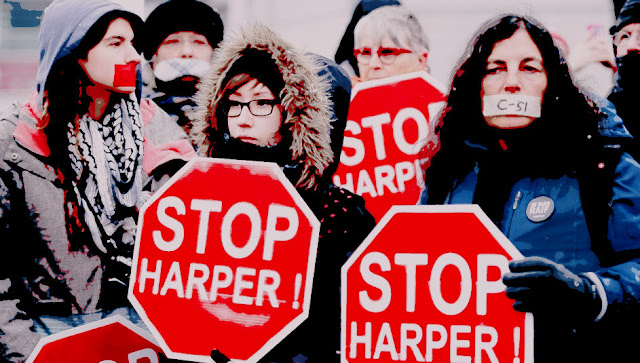 Earlier today I ran this adbuster's video with its reasons we deserve better than Stephen Harper and his monstrous regime...

Now here's another powerful video with even more reasons to Stop Harper...

He is the worst Prime Minister this country has ever known.

It is the worst and most corrupt government in Canadian history.

And in case anybody had forgotten.

This is what this election is all about... 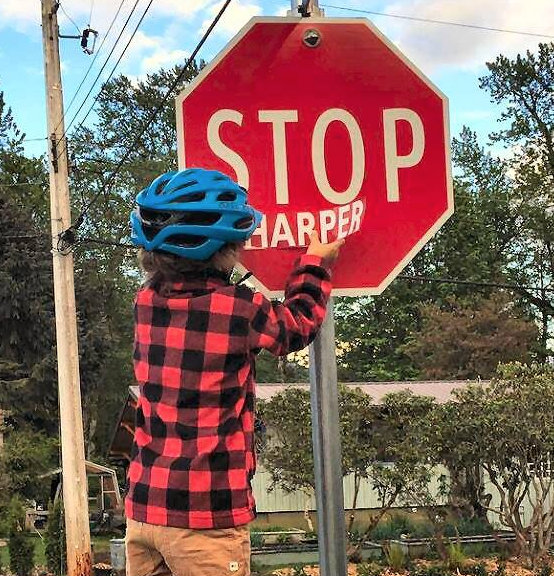 I am appalled at the vandalism from people in your circles. The "Harper" stickers, the spray painting of Conservative Signs, your Candidates echo your immaturity in the sign bracketing tactics across Canada. The interference with the election is disgusting.

I hope you have realize you've staked your hopes on freebees with Trudeau who couldn't debate himself out of a paper-bag, and Mulcair who will pull the same stunt as Notley in Alberta, and desecrate our economy. You are willing to give up your Liberty, your freedom for something these two seem to have promised. Do you think Mr. Mulcair will produce when he hasn't even paid back the misappropriated funds from his campaign offices? Do you think Trudeau will be there to support and in some cases back our Canadian Forces in International confrontations?

You may want to "Stop Harper"... That's fine, you're entitled to your opinion.. But if we permit either of the 2 Great Panderers into office, we face much larger external issues, including the "migrant"/ISIS crisis in Syria.

Please think before you vote... make sure you vote with your head... not your heart... because the heart makes stupid mistakes, in this case one that we have to live with for 4 years.

Thanks for all your very hard work. Sometimes I think you must be more than just a party of one Simon. All the best to you and keep it up. I send your blog to everyone I can. Canada has become an outlier in global eyes. We are wackos who would go to Ramallah to "chasten" the PLO (Baird). We take warrior positions yet we do not have resources. (Lowest investment compared to GNP in armed forces.) We take positions supporting conflict while other nations attempt to come up with resolutions (Ukraine and this includes the pope who threw Harper out in about 10 minutes at the Vatican the day before he met with Putin) We are a joke along with Australia in the world for our dangerous environmental policies and lack of oversight. We even scare the USA (Alaska - mining). Our lack of support for the missing and murdered women is internationally criticized. The ad is correct, we need to change or most nations will stop trading with us and our products will be seen as undesirable, like South African wine and Californian grapes were.

hi Pamela...you're welcome, it's a pleasure to share videos like those.I can't get enough of them. And isn't it great to know that we have so many talented people on our side. We have a definite edge when it comes to social media, it will play a big role in this election, so we should use it to the max...

hi Mr V...I don't see that there is any serious vandalism going on. Putting stickers on stop signs doesn't hurt the signs and can be easily removed. And in this case I intend to vote both with my hear and my head. As far as I'm concerned either Mulcair or Trudeau would be better than Stephen Harper. Nobody has desecrated our economy and our values more than he has. And how can you talk of freedoms when nobody is doing more to restrict them than your Great Leader.? Have you studied Bill C-51, do you realize where it would take us? If you treasure your freedoms you must vote for anyone but Harper...

hi John...thank you for your encouragement. I wish I was more than a party of one. I could do with an editor. ;) But really I'm just trying to contribute my two bits to the struggle to get rid of that monstrous un-Canadian regime. I simply couldn't stand by and not protest in my way, like you and others are doing in your way. If I didn't believe that the future of this country is at stake I would certainly not be doing this. I have many other interests and never enough free time, But I couldn't live with myself if I didn't try to do something to defeat the Cons, and the thought that we could drive them from power in less than forty days has me chugging along like a steam engine... ;)

Chug away ! Thank you my friend ! My fellow Canadian !

In my riding the political vandalism has been leveled at the NDP and Liberals, with signs for the candidates for those parties being destroyed and defaced.

Trudeau and Mulcair are far from ideal, but they are both preferable to Harper. At this point I don't really care if it's a Liberal or NDP victory, as long as Harper and his corrupt, abusive thugs are removed.
Harper is the single biggest threat facing Canada. He is the real terrorist. He is the one causing Canada to decline. He is the one slashing at the Charter and Constitution. He is the one creating a toxic nation for the present and future, and he is the one limiting our freedoms.

Once Harper is out, we can work on what's next. But Harper gone is the first necessary step.

I really like the music in that second video! Who was responsible for it?

Simon you are not a party of one. I and many others consider ourselves Simonites. Keep up the good work until this vile man is gone.

To state the obvious:

The successful tactic of this crime-ring in all details ranging since the seventies, is to set up the suspect in appearance as a hypnotized victim in the crime scene…