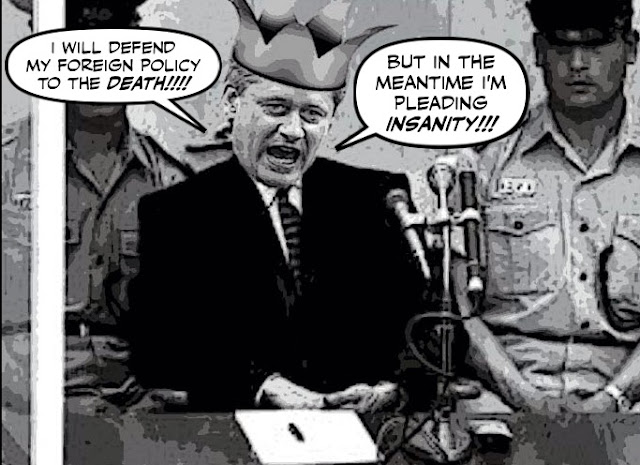 Tonight Stephen Harper will take part in the Munk Debate on foreign policy, along with the other leaders.

And if there is any justice it should be a trial of his insane foreign policy.

And the way he has shamed us in the eyes of the world.

For as this leaked report reveals, the damage couldn't be more devastating.

Canada’s international clout is “under threat” as its honest-broker role is replaced with a more assertive stand that plays down traditional multilateralism, an internal Foreign Affairs briefing document is warning senior federal government insiders.

“Despite Canada’s reputation as an active player on the world stage, by many measures, its relative influence has declined or is under threat,” they say.

The Con hogs and their depraved leader have turned us into a pariah state. Fewer countries want to be seen with us in public, for very good reasons.

We're the ones whose one sided policy in the Middle East, has turned diplomacy into a love story... 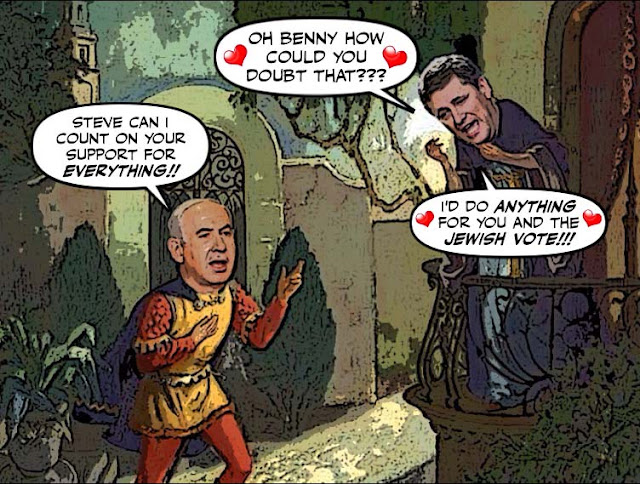 We're the belligerent blowhards, with the big mouths... 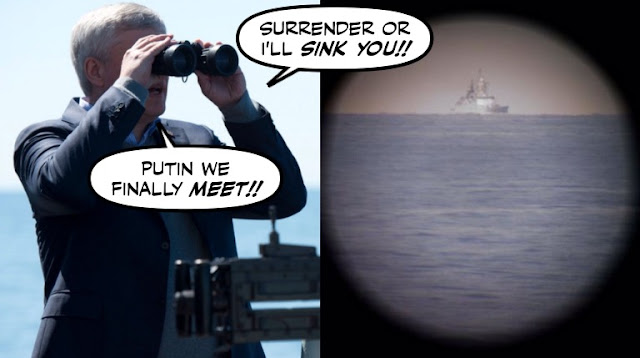 And the tiny army... 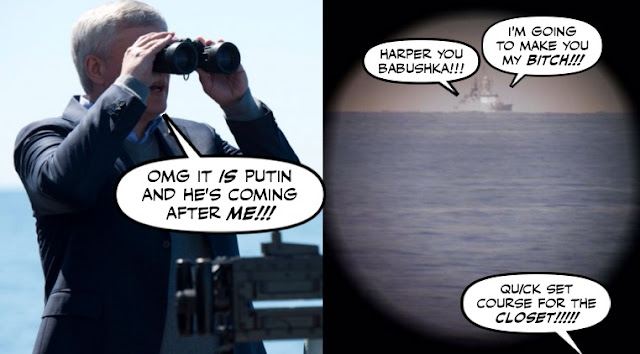 We are the ones who are losing our power to be a force for good in the world, or influence ANYTHING... 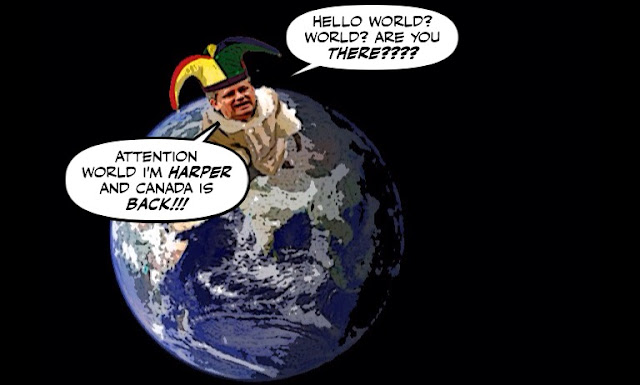 We are the Canadians with bags over our heads... 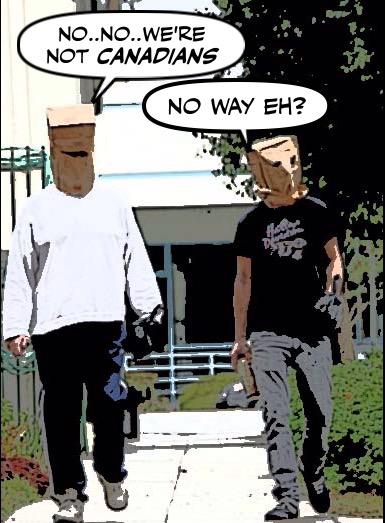 So you might think that tonight's Munk Debate might be the opposition's chance to make Harper pay for what he has done to us.

But unfortunately, as Michael Harris points out, that's probably not going to happen, because Harper and his Australian flying attack monkey Lynton Crosby have other ideas.

Will the opposition lay a glove on the man who has single-handedly gutted foreign aid, erased peacekeeping as part of the Canadian vocabulary, and turned Canada’s foreign policy into Wrestlemania with real blood? If the debate on the economy is anything to go by, the answer is almost certainly no.

All of the low-information, hot buttons will be available to Harper as he and his Australian guru, Lynton Crosby, try to change the channel from a lousy record and zero substance to heightened emotion and rising xenophobia: Israel/Palestine; the Red menace in the Ukraine; the beheaders of ISIS; and the refugee hordes of potential terrorists.

If Harper and Crosby get their way, all roads will lead back to the niqab, which is as good a metaphor as any for expressing how distracting issues have trivialized this debate season.

And they could turn the debate into a nightmare or a fascist circus... 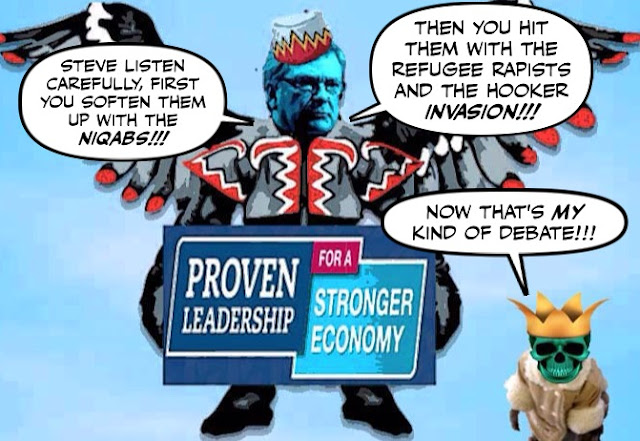 And the good news? Stephen Harper's real trial will happen three weeks today. When Canadians will get to be judge, jury, and hopefully cheerful executioners.

That leaked report which will embarrass the Cons, shows the Great Canadian Resistance is alive and active:

Foreign Affairs is arguably the department that has offered the most resistance to the Harper era, chafing at the shift in its mandate and the black-and-white world view the Conservative Leader expresses on some international affairs.

So when we give Kevin Page the Order of Canada, let's give them one too.

And nothing will ever change what most Canadians already know on a gut level.

You know, the bag people.

We really have to Stop Harper.

And stick a fork in those Con hogs. 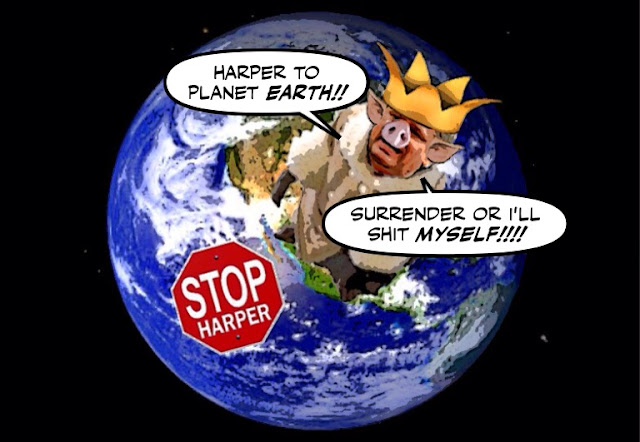 Harpers foreign policy including his blind support of Israel is defined by and rooted in his evangelical fundamentalist christian beliefs. We cannot discuss Harpers ideas in foreign affairs, because they are not based on any ideas. They are based on for the most part religious dogma. Welcome to our Theocon PM. Canada is in a modern dark age right now Simon.

This leak is timed to do maximum damage and shows that not all civil servants are just following orders. Harper's fear tactics seem toothless when he's polling at 32%. More brown envelopes please. It's just like the academy awards.

Today we also find that Harper is underfunding embassy security worldwide. He must think that diplomats are not Old Stock Canadians.

I am shocked that according to the polls another Harper Government ( hopefully minority) is looking likely. When people vote their fears over hopes then scum gets elected. The Australian sleaze bag appears to be earning his money. Finally...why in creation did Mulcair campaign as a Red Tory...he is supposed to be a Progressive. I want to puke !

It sounds for all the world like Canadians are just as backwoods and witless and therefore pathetically comical as the amerikans portray us to be at every turn. We change our ideologies and our opinions with every new bullshit op-ed piece that somebody writes about heil harper. Let's hope the Unions and First Nations and Vets and Women and Young voters and all the other so-called "terrists" (see "w" for history of that word) that say they can't stand any more harper bullshit and who are all treated so well by the heil harper crime cabal get out and vote this time instead of staying home again.
We'll sure as hell know who voted on October 20th, won't we?

hi Pamela...we sure are in the dark ages. But we are also closer to the light than we have ever been. So I'm still hopeful that when the day of decision comes, a massive wave of change will wash away the Cons...

hi rumpleyfips...yes it is inspiring to see that Harper hasn't been able to scare or muzzle everybody in the civil service. You can imagine how their PMO hounds are searching for those who leaked that document, it must be an absolute nightmare.I just hope that Canadians care enough about the issue so they don't let the Cons get away with it...

hi David...yes he is indeed a one-man foreign policy disaster, and if there was any justice he would have been nailed for it long ago. Bit as I said in my post he is using those disgusting wedge issues to try to distract us from his ghastly record, and he can't be allowed to succeed....

hi anon...yes Lynton Crosby is very skilled at what he does, and of course he couldn't have sleazier clients than the Cons. Let's hope that hope triumphs over fear. But as for the NDP's decision to campaign to the right of the Liberals, I might understand what they were trying to do, but I'm afraid it's showing signs of failing spectacularly....

hi anon....well if we manage to blow this election, after the Con's record in government, we'll all have to put on our colourful tuques and start speaking like the MacKenzie brothers. Because it will be the triumph of idiocy. Still, like you, I'm hoping that all those Canadians who hate the Con regime with a passion will turn out in huge numbers on election day. If not I'm afraid we could face disaster and have nobody to blame but ourselves....

To counter the wedge issues of the Cons, how about a wedge issue that the Liberal, NDP and Green Party can use in an effort to persuade some Con supporters to either: a) stay home and not vote on Oct. 19 or b) consider voting for a different party candidate.

It's common knowledge that many people who vote Conservative in federal elections are Christians and Jews on the centre-right and far-right of the political spectrum.

For those who consider themselves pro-life, here are 4 questions for those who plan to vote for the Conservative candidate in their riding:

1. Do you believe journalists (and the public at large) should hold people in power to high scrutiny no matter who they are or what political party/ideology/religion they profess? Yes or No?

3. What pro-life legislation has Harper introduced or made into law since coming to power in 2006?

4. Sister Joan Chittister commented on the PBS program, Now, (Nov. 12/04): "I'm opposed to abortion. But I do not believe that just because you're opposed to abortion that that makes you pro-life. In fact, I think in many cases, your morality is deeply lacking. If all you want is a child born but not a child fed, not a child educated, not a child housed and why would I think that you don't? Because you don't want any tax money to go there. That's not pro-life. That's pro-birth. We need a much broader conversation on what the morality of pro-life is."

Do you admit you are really pro-birth, not pro-life? Why or why not?