My Letter to the Harper Supporter Wayne Gretzky 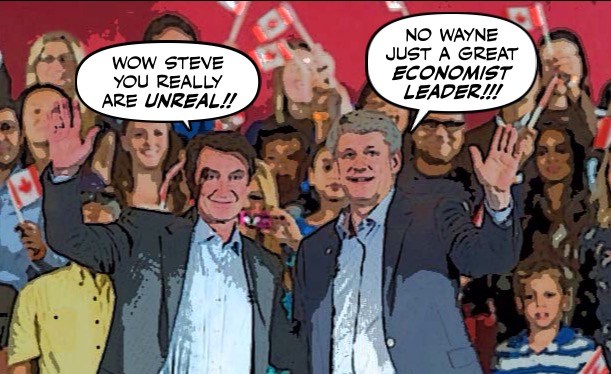 I have to admit I that you were never my hockey hero, because I've always  been a huge Habs fan. You know, the loser team with the glorious past, the one only the Leafs can make look good.

And we needed to play you like we needed a hole in the head, or a yet another puck in the back of our net.

But you were a great hockey player, and it was a pleasure to watch you play OTHER teams. And of course, score for Team Canada.

So I'm very sorry to see you destroy your legacy by endorsing a man like Stephen Harper.

Despite being denied the ability to vote, hockey great Wayne Gretzky endorsed Conservative Leader Stephen Harper during an event in Toronto. "I think you have been an unreal prime minister," Gretzky said, following a brief Q&A with Harper that mostly covered hockey.

Gretzky said that Harper has been "wonderful to the country." The hockey legend wished him success and said that he knew the Conservative leader had the country's best interest at heart.

Because you're right Wayne. He has been an "unreal" prime minister.

The worst and most politically depraved prime minister in the history of this country... 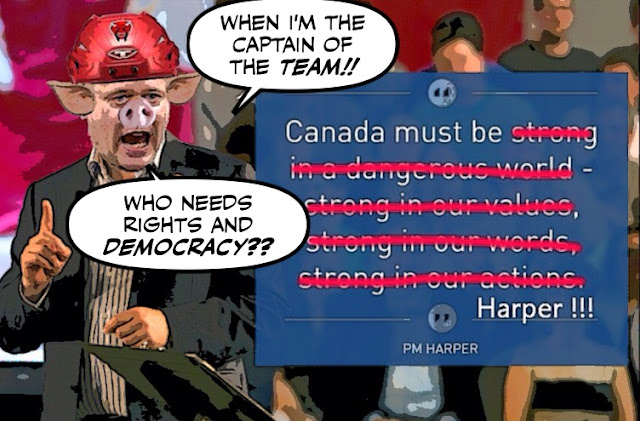 A monstrous goon who has cross-checked our democracy over and over again, high sticked our justice system, speared our values, slashed our rights like a dictator or a maniac.

And has left our precious Canada lying on the ice in a pool of blood. 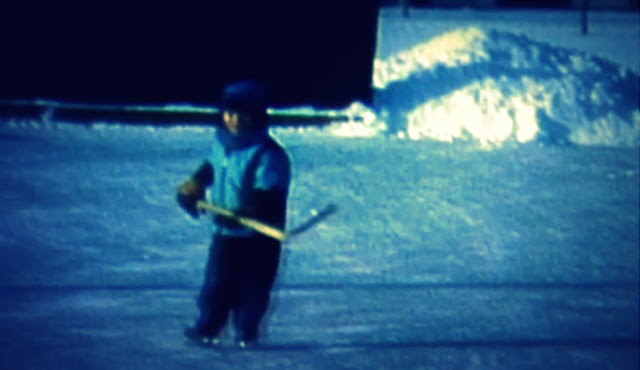 The kinder, gentler, better place millions of Canadians are desperate to take back.

The ones who loathe Stephen Harper for all the right reasons, and are determined  to defeat him.

So rather than praise him Wayne, you should have condemned him. Or just talked about hockey, or whatever millionaires talk about. Or just said nothing.

Or failing that you could at least have had the decency to challenge his decision to strip the vote from thousands and thousands of expatriate Canadians like you.

Who could have used some help from a celebrity in their battle to stand up for their democratic rights. Like Donald Sutherland stood up for their rights and his own.

To try to stop Harper from suppressing their votes, as he would suppress the votes of so many others. 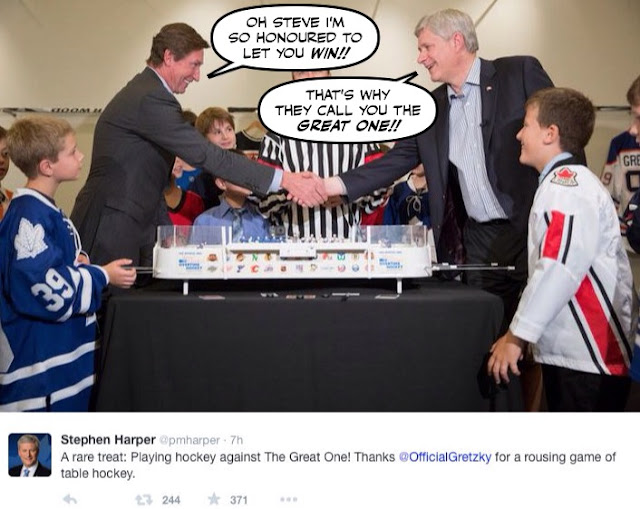 You embraced him, and betrayed us.

And for that millions of Canadians will never forgive you. And for many of them you will never again be The Great One...

You know Wayne, I could be pretty harsh myself eh?

Because in my moral code there is only one thing lower than a Con, and that's a Con collaborator.

But I can't be sure that you haven't suffered too many concussions to know what you are saying or doing.

So let me just say thanks for nothing. Now go jump in your private jet, and go back to where you came from.

And before you go be sure to say bye bye to your "unreal" prime minister.

Because he's not going to be prime minister for much longer.

We're taking our country back... 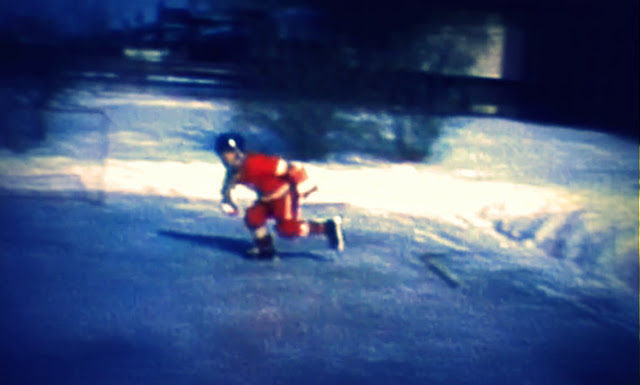 Wayne, Wayne, how could you have forgotten your Canada?

"Turns out 99 was his IQ as well - Moderate Westerner"

Pretty much sums it up. I'm guessing that Donald Sutherland is into the triple digits.

Only 1 month from today! Good morning, Simon........
A while back I heard about Gretsky being in Ontario to endorse some guy running for Con leadership and thought to myself as to WHY? A week or so ago, I read about new line of clothing from Sears called 99 and showed picture of Gretsky wearing a "new suit"! Hmmmmmmmmmmmmmm ! Guess this All fits into the SCHEME of Things wouldn't you say???????????????????????
Now, IF Johnny Reid steps up to the plate, my faith in humanity will be ruined Forever!

To come out and publicly support Harper shows that "Weiner" Gretzky has taken one to many pucks to the head. What an ill informed idiot.
JD

Step 1 in Harper's 'Wizard of Oz' strategy to win over the big enormous douche bags in this country.
What a sad day when someone like Gretzky fails Canada completely.

Deep thinking Wayne Gretzky is the absolute epitome of the term 'useful idiot'.

I hear his junk wine is made in China because it can't get a VQA stamp.

He's rich and self-entitled..and he doesn't live here.., what do any of you expect? they did some sort of article once in the Guardian about whether or not famous footballers were rich..yep...and if they supported the Conservatives..yep..so, no surprises here...
It sort of balances out the fact that Donald Sutherland came out swinging about not being able to vote...
I always called him "Whine" Gretzky when he was playing, always moaning about something..if it wasn't for Messier (another ConJob, I'm betting) Gretzky wouldn't have been half the player he was...and yes, Simon, even though I've never been to Quebec, it's always been the Habs for me, too...

Gretzke ; he didn't come back for you .

Calling him an idiot is being too kind. Has he given up his Canadian citizenship? Perhaps that is why, unlike Donald Sutherland, he is not upset at losing his vote.

But if he is now American, I do believe he could have broken our election law by endorsing a political party, and Harper as PM. The Lizard of Oz apparently was not deemed to have broken the law because he was selling his services and not endorsing any party.

Does anyone know if Gretzky is still Canadian? A complaint to Elections Canada may be in order if he is now American.

In 2003, with debate raging about the Iraq War, Gretzky fed a goalmouth pass to George W. Bush: “All I can say is the president of the United States is a great leader. I happen to think he’s a wonderful man and if he believes what he’s doing is right, I back him 100 per cent.”

Wayne is right when he says harper is unreal....lacking in reality, substance, or genuineness : artificial, illusory;
That describes harper 100%.

Wayne Gretzky...You see Simon, Wayne is no longer an average Canadian or American, he`s gone corporate, he has amassed great wealth and no doubt has investments everywhere, his daughter is a model or actress, or something like that, his daughter is married to a very wealthy top ranked PGA golfer..

However, people are smarter than that, and in many if not most instances celebrity endorsements backfire..

Water off a duck`s back and there will be more endorsements coming..

I`ve been informed that the top Conservative strategists have been actively seeking endorsements from every well-known, well-liked celebrity in Canada, and outside of Canada...It appears Mr. enormously wealthy Wayne Gretzky was the first to bite the poisonous apple..

It won`t help this time round.

Gretzky is only interested in protecting the wealth of himself and his well paid hockey brethren. He also has a long history with shysters, so he fits in well with the CONS. Skalbania, Pocklington and McNall were all prominent hucksters in his circle.

Both the Liberals and the NDP will apply a minuscule tax increase on those who are better off. In CON minds all taxes are bad for the wealthy, so he doesn't want to pay any. The CONS believe in selfish people like Leona Helmsly and Ayn Rand.

Gretzky had excellent lateral vision and a favoured hockey career.. He also had unbalanced protection from the NHL and team goons.Gretsky has had a free ride from North American society since he was a teen.

Well you are just a bunch of boneheads if truth be known. Gretzky and his entire family are from the City I live in and I think you MORONS would be shocked at how much time he spends in his hometown. He gave from a modest family who are most respected in Ontari-OWE! You are all full of yourselves and you will slam anyone who doesn't agree with your HYPOCRITICAL backing of a THUG! Gretzky and his Father have done more selfless acts for our City, for sick kids all over Canada and to TRASH someone they way you are is despicable to say the least. You have your heads up "where the sun doesn't shine"

No one is questioning whether Wayne and his father have done selfless acts for your city, for sick kids across Canada, etc. I would expect this, just as Uncle Ben told Peter Parker: "With great power comes great responsibility."

But one needs to ask: How much does Wayne really know about Canadian politics, the various Con bills/policies, the Cons charged and convicted of crimes, etc. Do you think Wayne has even read a short summary of the "Fair" Elections Act? Ask him next time he's in town. Have you?

SO DISAPPOINTED IN WAYNE GRETZKY'S ENDORSEMENT OF HARPER. BUSH WAS A GREAT PRESIDENT!!!! HE HAD A 14% RATING WHEN HE LEFT OFFICE. ALSO, DID YOU KNOW THAT HE DIDN'T LIKE CANADIANS.OH I FORGOT, YOU ARE NOW AN AMERICAN. GO BACK TO CALIFORNIA WHERE YOU BELONG. WE DON'T WANT YOUR KIND HERE. HARPER HAS DONE ENOUGH DAMAGE.

"One of the greatest prime ministers - ever!"

And as far as the multiple-citizenship issue goes: most of those motivated and entitled or qualified to play this game will grab as many passports as they can stuff into their pockets. Few renounce or relinquish. My guess is that the Great One remains a fellow countryman of the greatest Prime Minister - ever.