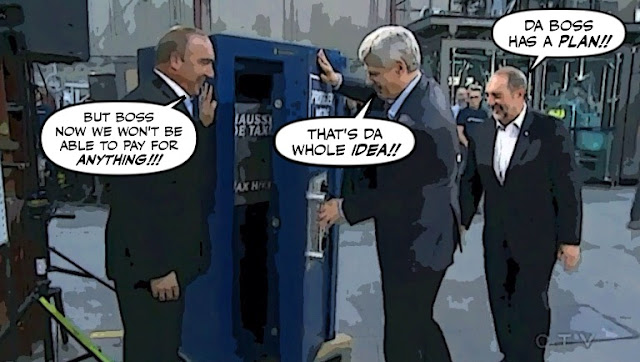 Well there was Stephen Harper in Quebec yesterday, locking a promise never to raise taxes into a giant safe.

Vowing to put a tax lock on our future.

The gesture is a symbolic one, enshrining in law what Harper has already repeatedly promised and allowing him to say other parties — should they form future governments — would have to break the law in order to raise taxes.

And while some wondered whether he got the idea from a Saturday Night Live skit.

For that lock box does seem awfully familiar.

Others pointed out that he actually got his idea from David "Piggy" Cameron and his ghastly Australian attack gremlin Lynton Crosby.

The “tax lock” is a direct lift from British Prime Minister David Cameron’s re-election playbook. It also bears the fingerprints of right-wing campaign consultant Lynton Crosby, an Australian who is working with the Conservatives. Crosby is credited with having helped secure election victories for Cameron and Australian Prime Minister John Howard. 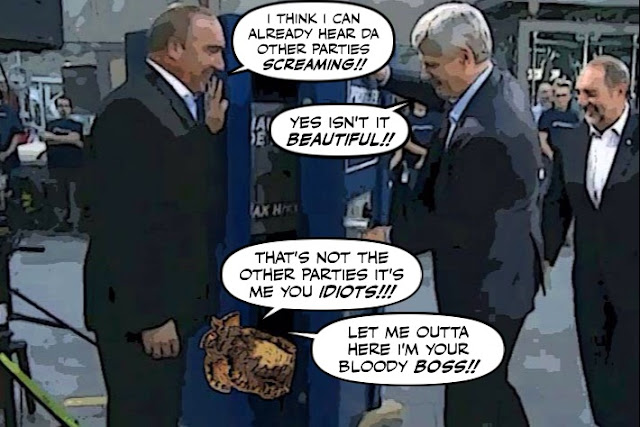 For doesn't this sound even more familiar?

There will be no VAT, national insurance or income tax rises for the next five years under a Conservative government, David Cameron will announce today as he vows to enshrine the Tory pledge in law.

He will urge voters to go with their "gut instinct" on May 7 and remember the "first law of politics" that Labour will put up taxes while the Tories are dedicated to cutting them.

Mr Osborne, the Chancellor, said that the figures are a reminder that Britain's economic recovery "cannot be taken for granted" and emphasise the need to "stick with the plan".

But then why should we be surprised? When Crosby always works for those who would put a lock on government so they can slash government to the bleeding bone.

Which they are already killing and preparing to  demolish.

Not enough to help our medicare system cope with an aging population... 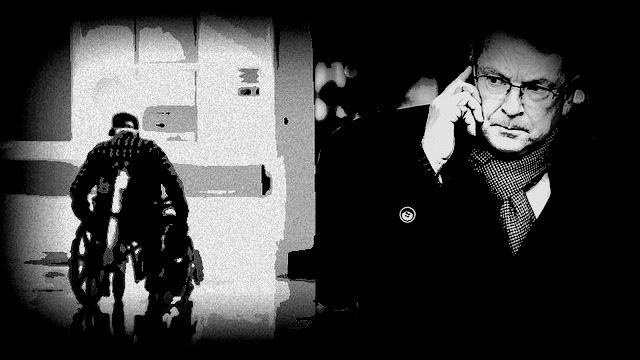 Which makes me wonder when will the opposition parties start asking our Great Leader, who is really running the country, him or Lynton Crosby?

Ask him who elected Crosby Prime Minister and gave him a mandate to destroy OUR country?

Or suggest that Canadians float both of them over the Atlantic to meet their good friend Dave... 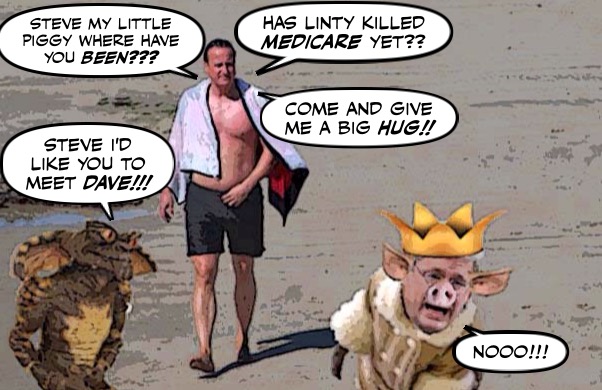 When will the opposition use the ghastly attack gremlin as a weapon against his master?

Isn't it bad enough that Crosby is stirring up fear all over the country. Are we really going to let him steal our future?

When will the opposition finally take the gloves off?

And start hitting the Cons where it hurts....

Been there, done that.

Baloney. Oceans of pork for your cronies, and perpetual war on the poor on the guise of "austerity".

The clock is certainly ticking Simon and Mulcair and Trudeau have precious few hours left to take the mask of the monster and properly frame him as the pathological liar and uber control freak that he is. The skirting of lies during the horrid Duffy "trial" were enough to get this titanic of a campaign permanently off the rails, but from the others have chosen to take the Adrian Dix "play nice" approach and hand harper yet another victory. I think it's far too late to recover at this point and we'll be having the same conversation in 2019, yet with even more grotesque abuses of power to talk about. Again, hope I'm wrong but it's time to put a fork in the progressive hopes as they are done.

The game is up, the jig is done. Not even the Australian dingo can save Harper from a dim 3rd place finish.

The polls were lying. Harper is in for a rude awakening on Oct 19th when he gets turfed out of politics forever. You might see a Liberal minority government. I would be happy with that, even with NDP at this rate.

I sure hope you're right anon and would love to raise a glass of wine and cheer to that. My gut is telling me otherwise though and I'm thinking the opposite is true. Never have I wanted to be more wrong about something, but not feeling overly optimistic that we're in for more of harper's dangerous chess game with our country.

hi anon...yes it's the old Con game. Shrink government until it's small enough to drown in a bathtub. Impose austerity on us, and live it up like hogs...

hi bcwaterboy...well I certainly hope you're wrong. If Harper wins another mandate after his ghastly record it really would be the limit. And I'll try to get transferred out of the country until I'm sure it has recovered its senses. Or more likely stay here to ensure that next time progressives are united because this madness has to end sometime. But as I said in my post, it is a sign of desperation, polls show that it is still a tight race, so if the Liberals and the NDP would stop fighting each other for a moment and remind people of the Con's ghastly record, we can still win and win big. But yeah, the clock is running out...

hi anon 9:33....now that's what I want to hear, a cheery voice. I have to admit that the doom and gloom is getting even me worried. But I only have to remind myself that the desire for change is really strong, to feel pretty confident again. We do have things to worry about like vote splitting, but we still have plenty of time to talk about how we can try to avoid that....

hi anon...thanks for the link to the video. I'm not a big fan of rap songs, but I sure liked that one. Good for them. We need to reach out to young Canadians in every way possible....