The Munk Debate and the Justin Trudeau Challenge 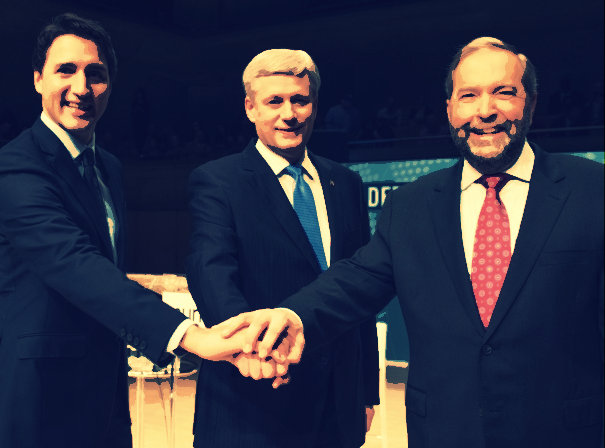 I thought it was the best debate so far, if only because at long last it was all about our precious and very threatened Canadian values.

And as predicted, as soon as Stephen Harper stopped groping the hands of his opponents, he set out to destroy them.

By reaching into Lynton Crosby's sweaty bag of dirty wedge issues, and challenging his opponents to criticize his decision to strip a convicted terrorist wannabe of his Canadian citizenship.

And since it is such an explosive wedge issue, I was glad to see the way Justin Trudeau rose to the challenge. 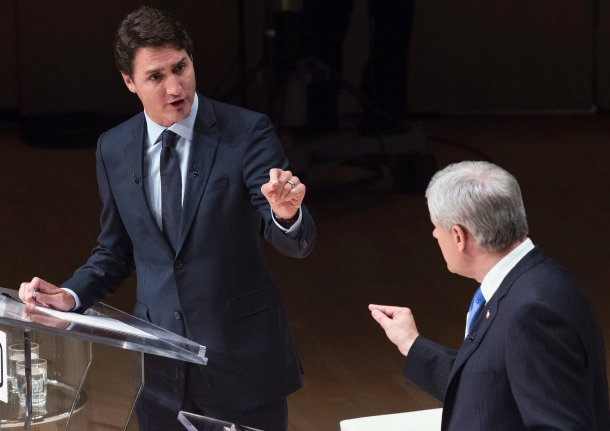 In one memorable exchange over a 2015 law that allows Ottawa to strip the citizenship of dual citizens convicted of serious crimes, Mr. Harper confronted Mr. Trudeau over his unwillingness to take such a measure. “Are you seriously saying … we should never be able to revoke citizenship from somebody? Why would we not revoke the citizenship of people convicted of terrorist offences against this country?” Mr. Harper said to applause from the Munk debate audience at Roy Thomson Hall in Toronto.

Mr. Trudeau suggested the measure was un-Canadian. “You devalue the citizenship of every Canadian in this place and in this country when you break down and make it conditional for anybody. … We have a rule of law in this country and you can’t take away citizenship of an individual because you don’t like what someone does.”

Not only because there are a lot of dual citizens in this country who want to hear that message. Or because it was a brave move considering what standing up for our values seems to have done to Tom Mulcair and the NDP in Quebec. 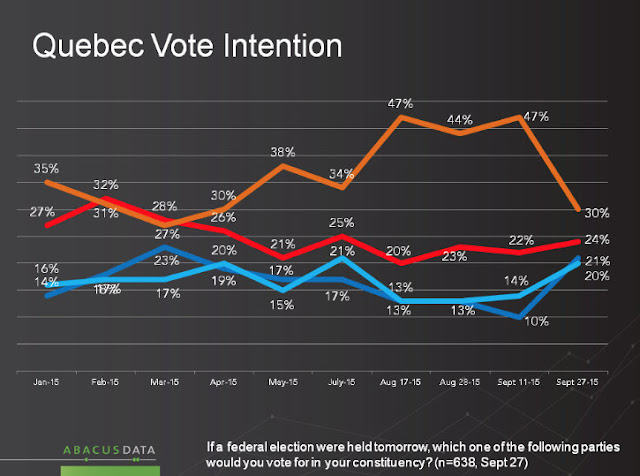 But also because the aggressive way he handled it, it seems to me, is the only way to handle that dangerous wedge issue.

Which is being frantically peddled by people like Jason Kenney.


As only that old political hooker could... 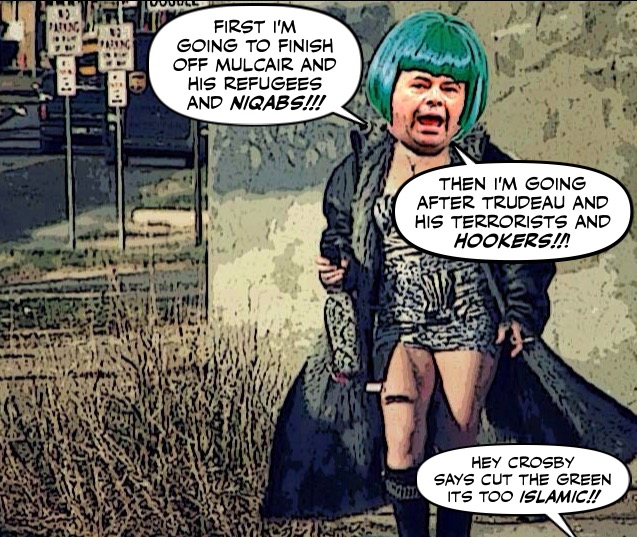 And it also suggests that with so little time remaining, it may turn out that Trudeau is our best hope of surviving that onslaught of xenophobic filth.

You will read a lot of stories about the substance of the issues discussed but don’t be fooled. This whole event was an exercise in three men trying to snip off the family jewels of the others. The script was foreign policy, but the drama was all politics. Trudeau excelled by doing two things: showing passion and touching the emotional buttons usually the domain of Harper.

Here is the irony. Mulcair, ever intelligent, blessed with a voice that could charm the pants off anything that has pants, and smarter than anyone in Canadian politics, looked a little old-fashioned in this contemporary gunfight at the OK Corral. There are new weapons in play these days – charm, charisma, and energy. In a word, Mulcair suffered from the defect of his best point; his calm, cerebral arguments were being directed against a younger man who is the incarnation of both generational and political change.

Mulcair was playing brilliant chess; Trudeau was engaged in a game of thrones.

The kind of change that can sweep away all before it, including all that Con garbage. 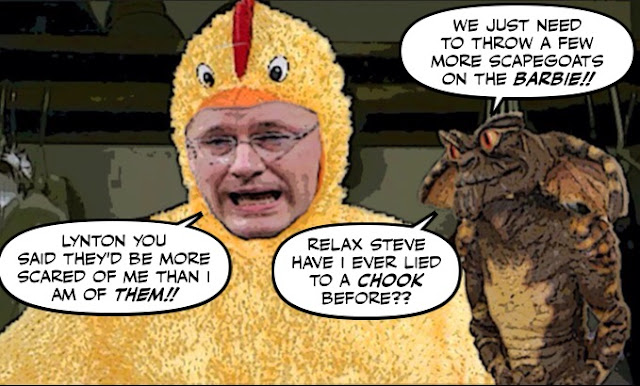 But of course, there are still 20 days to go,  As the threat of a Harper victory grows, a lot of progressives are just looking to back the leader they believe has the best chance of stopping him.

And waiting as they are in Quebec, to create a massive progressive wave.

It doesn’t much matter to many voters whether the swell is red or orange — talking to voters on the doorsteps in three Montreal-area ridings, it is clear that the vast majority want a new federal government but two out of three said they have not yet decided whether to back the Liberals or New Democrats.

So anything could happen.

But if we are to win it's absolutely essential that the anti-Harper forces not use up all their Canadian values ammunition fighting those monstrous wedge issues, as Harper would want us to do. Because our bullets will only bounce off them.

Instead we need to focus our fire on the real issues of the campaign, the corruption and incompetence of the Con regime. His brutish assault on our democracy. And his plan to kill our Canadian values by strangling our Canadian institutions like medicare and the CBC.

As he made only too clear yesterday.

As if he hadn't damaged the CBC enough... 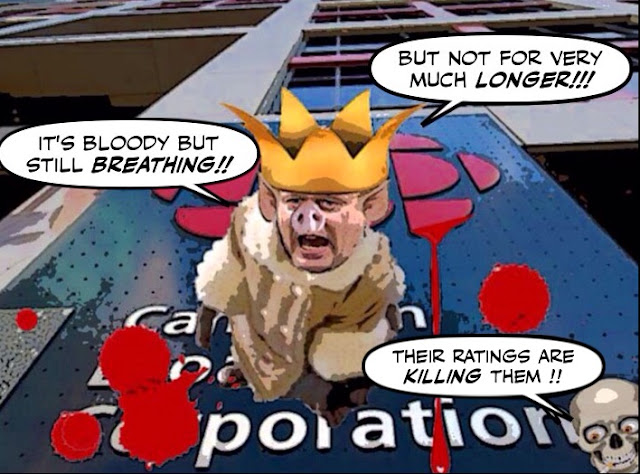 As if ratings were all that mattered.

And the good news? That brave CBC crew should inspire us. For by daring to confront the danger of that deadly epidemic to show the suffering of its victims, they were in their way standing up for our values. And showing us why they and our institutions matter.

So we must not be discouraged. We can still win, or hold Harper to a minority and topple him two weeks later.

We just need to attack the Cons harder than ever before, work even harder to get out the vote, and spread our message of hope and change.

And of course send this message to Harper and his foul regime:

You will not steal our country by destroying our values.

Or as Blue Rodeo says in this new video, by stealing our dreams...

You will not scare us or distract and divide us with your disgusting wedge issues.

The wave of change is coming.

And it will swamp you... 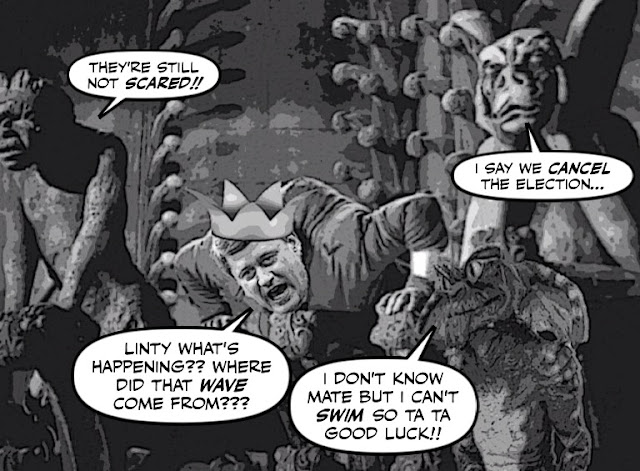 So now Jason wants to be 'Canada's Chubbiest Transvestite Hooker'? Make up your mind Jason. Nice hair, though ;)

Really sexy photo of Kenny. Too bad his oily sweat beads are missing as this would nave completed the image. Whats with the Harper smirk? It was really prevalent when he addressed Trudeau during the debate and very similar to the Bush smirk. In the past its usually been associated with a "gotcha" moment such as the Bill C 51 announcement after the attack but last night he did not have any gotcha moments so he either knows something that Trudeau (and the rest of us ) are not aware of or it associated with something else such as pure contempt for Trudeau and anything he might represent. Any thoughts?
Rt

My favourite part of this posting is listening to Blue Rodeo. No, I didn't watch the debate, but Michael Harris summed it up for me........AWESOME!

Pollsters seem to be basing their riding projections on correlation with the last election. Incumbantcy may not be all it is cracked up to be. In the last election the Liberals had a leader nobody liked. This time they have a popular guy. The Conservative leader was tolerated last time but is now actively disliked. Four years ago the NDP ran a super popular candidate , now they run someone nobody cares about. These changes make me question seat counts from the punditocracy.

When I told my wife this theory, I said that if they were dogs Trudeau would be a Collie - smart, attractive and friendly. Harper would be a Corgi - short, nasty and brutish. Mulcare would be a cat.

"There's just no comparison between Nickelback and Blue Rodeo."

No Harper is definitely a Chihuahua. Yappy, Shrill, afraid, with bulging beady eyes and a tendency to bite at the ankles. Mulcair is more like a Shepard, with a tendency to herd, or mount a deadly attack. Lol.

Just you wait...By Friday the polls will speak volumes.

From www.therecord.com (14 hours after debates) ... Harper Stands Firm on Foreign Record ... 2nd paragraph says And while his debate rivals hearkened back to a different era in foreign relations, Harper stubbornly insisted that the steps Canada has taken on terrorism, the environment and trade are manifestations of "THE NEW WORLD ORDER ... TY