The Real Threat Stephen Harper Doesn't Want to Talk About 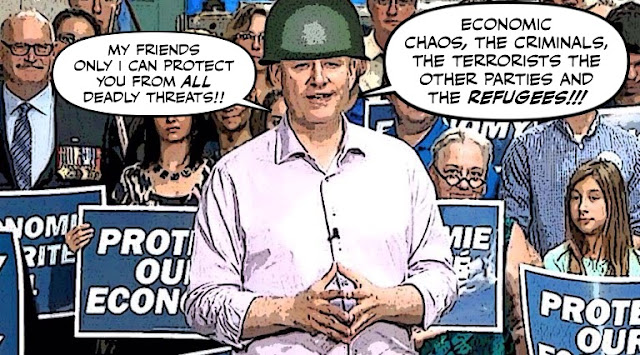 Well there was Stephen Harper yesterday, standing in front of a wall of PROTECT signs, defending his miserly response to the refugee crisis.

And playing the politics of fear.

Conservative Leader Stephen Harper is defending his government’s approach to the Syrian refugee crisis as “generous and responsible.” And he took aim at the Liberals and New Democrats for what he branded as their “reckless” promises to throw open Canada’s doors to assist with the humanitarian crisis.

But of course he would, because he knows that issue is working for him, and he is only following the orders of his Australian attack dingo Lynton Crosby. 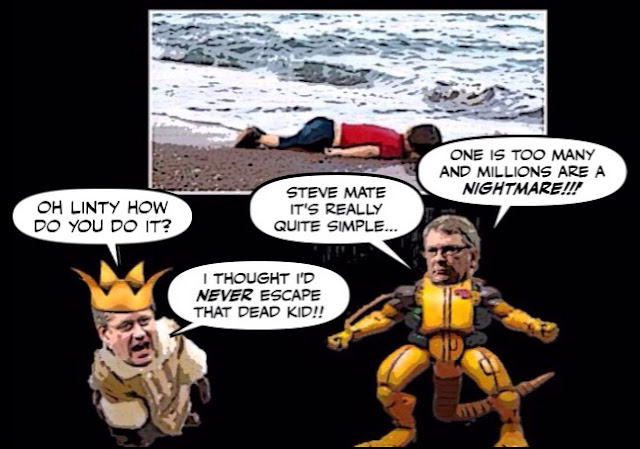 Who has instructed him, as he has done other leaders in other countries, to portray desperate refugees as a monstrous threat. A churning human tsunami of brown people and Muslims who would swamp our country, and drown us or behead us in our beds. In short, a living nightmare.

Even though if Canada did absorb more refugees, it would be roughly the equivalent of a drop of water in a large bucket.

But he is scaring people, the issue is working for him, so I strongly suggest that we change the subject, and hit him with a real living nightmare.

His failure to protect Canadian seniors from a tsunami of human misery that is threatening to swamp our healthcare system. 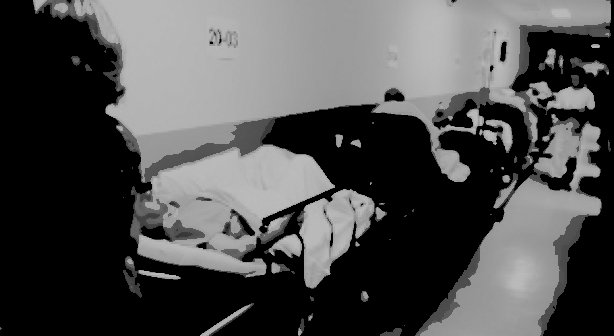 Canadian doctors, eager to put health care on the election agenda, are challenging federal leaders to back a $3.3-billion package of measures they say would have an immediate impact on caring for the nation’s aging population.

“The system we have now was really built 50 years ago for acute care. We didn’t build it to look after a large population of aging patients with complex diseases.” said Dr. Forbes, a Nova Scotia family doctor. “As physicians we see we have to do something about it now.”

Because on this issue Harper is extremely vulnerable. Despite every ominous warning, even after ten years in power, he has done absolutely NOTHING to come up with a national senior's strategy.

Even though as Dr Simpson explains, the problem couldn't be more pressing or more urgent.

And the message couldn't be clearer:

Harper's failure to protect us from that totally avoidable threat, could condemn millions of seniors to live out their lives in a hell of his making.

Which could hurt him badly, not only because many seniors are his strongest supporters.

But also because we can use that issue as an excuse to remind Canadians that Stephen Harper has never been a friend of our precious healthcare system... 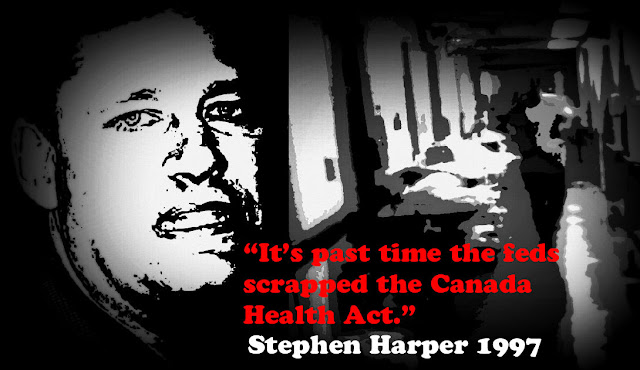 He was first elected with the support of a group that was founded to kill it, he has been slowly and stealthily strangling it with neglect, and is now preparing to slash federal transfers, starve it, and set it up to be privatized it beyond recognition.

And while we're at it, we can also point out that the Australian attack dingo Lynton Crosby who is orchestrating his fear campaign, is also a fierce enemy of medicare.

The lobbying firm founded by the Tories' chief election strategist, Lynton Crosby, advised private healthcare providers on how to exploit perceived "failings" in the NHS, according to a leaked document obtained by the Guardian.

And that ever since he won a majority for David Cameron, the grateful Dave has been tightening the screws on the once proud NHS.

So as I pointed out yesterday it's rapidly bleeding to death.... 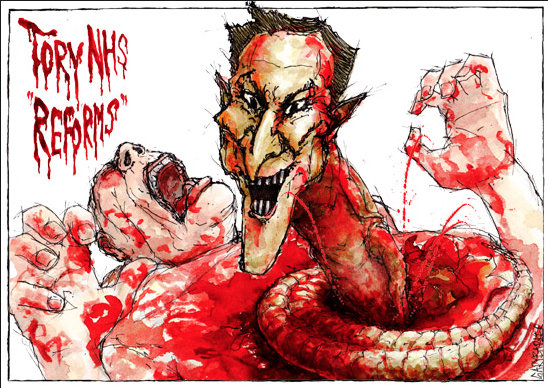 And on the verge of total collapse, despite the desperate efforts of the British people to try to save it... 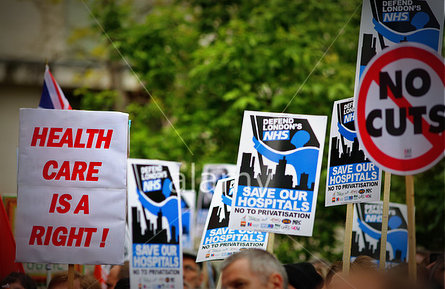 So one can only wonder what price Crosby might exact from a grateful Stephen Harper... 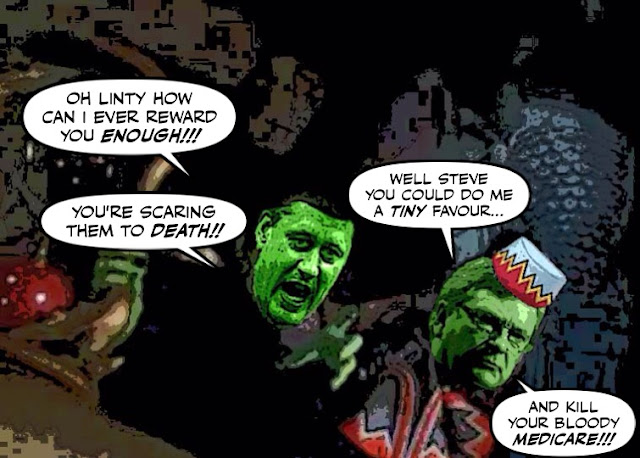 Yes, if the Cons want a nightmare I say we give them one.

It's time the progressive parties stopped playing patty cakes with those monsters.

And hit them where it really hurts. 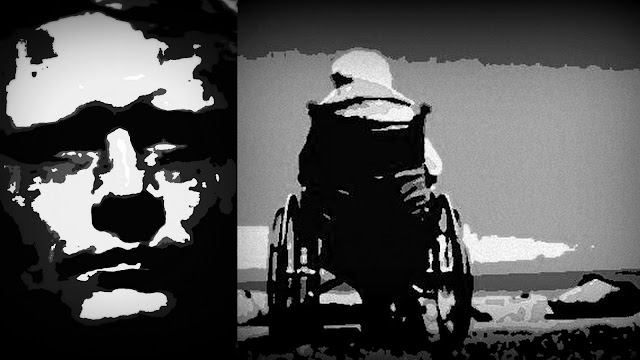 Harper will say anything to get re-elected.Many people following this refugee crisis are blaming it on Assad or Isis.
The west created this mess along with countries like Saudi Arabia and others.Now the Russians are there barely and Bibi is already at Putin's feet today asking that Russia not hurt Israel.
I gotta say if the power of the west can't take out a bunch of yahoo's in Toyota trucks,I'm sure Russia can give it a good shot.
The west created this refugee crisis.They bombed these poor people out of their homes and cities.The west has to figure out how to handle it.
I believe one of many who has this figured out is Eric Margolis.

The West’s objective in Syria was to overthrow its government, because it is closely allied to Iran, Lebanon’s Hezbollah and Russia. President Bashar Assad’s secular government in Damascus is just managing to hold off the rebels and mobs of fanatical jihadists sent by the Saudis and Washington – which pretends to be fighting the Islamic state. In fact, the Islamic State, or IS, is a tacit American ally.

As for the health care issue here in Canada I don't see any party talking to much about it.Maybe we need another song along the harperman style to go viral before the election which centers on this issue alone.
Isis in Canada is not threat.Losing our health care is and the lobbyist's have been busy promoting US style health for years.That should be enough to scare Canadians into dumping harper.

Did you notice the photo of Harper at the top of this page has a little girl in the background? Most if not all of Harper's campaign stops include one or more kids in the background. I guess Harper's goal is to recruit them for the Harper Youth organization. That that other guy did in Germany back in the late 1930s and early 1940s.

Notice that Harper has replaced his "Leadership" logo with "Protect Our Economy". The opposition parties need to keep Harper's so-called Leadership front and centre. Hammer Harper with daily reminders of what he has done to our country over the past 10 years. Websites such as Harper Watch and Harper Chips need to go viral as hashtags on Twitter. Simon, please create a hashtag for both these websites. I would but I'm not using Twitter yet.

Germany and France have finally seen the light and realize that US lead actions in the Middle East have contributed to the refugee crisis that Europe is now facing and that Russia can play a role in resolving the problem. Much to the chagrin of the Neo Cons the US government has reluctantly entered discussions with Russia on its resolution. Like the Harper Cons the Europeans are still in the US camp but have figured out that they somehow end up paying a hefty price for blindly following US lead initiatives. Wonder if there is a lesson for Canada as well.
RT

Our aging population will place a serious strain on health care over the next 20 years if left unchanged. However the retro-con vision of cut - cut - cut and transfer more wealth to the 1% through lobby group sponsored privatization is not the answer. We have opportunity through education, redeployment of our under utilized labor force, immigration, social and technical innovation to address this issue but it will certainly take a more visionary government than Harper can muster. Rather than leading the way he hasn't even held discussions with the provinces on this issue. Its almost as if its a repeat of the Senate issue where the government becomes so corrupt and non beneficial that it needs to be eliminated. Is this the ultimate Con plan?
A small example of our screwed up system in action is that of a young mother who was on welfare and discovered that she wanted to train to become a medical aid after helping with a hospitalized relative for an extended period of time. She was encouraged by the hospital staff and accepted for the training but had to abandon it after her social benefits were cut off as a result of taking the course.
RT

the refugee crisis will play well for steve and his cons. of course we now have the CBC report of the KPMG meeting with cabinet ministers during the investigation. Wonder why its taking so long.

People get the government they deserve by voting for it. If they fear refugees more than no health care then they will have to learn to live with their decision, or in many cases die because of it. Many who support Harper and his Cons are not wealthy. They really ought to understand Steve only wants their votes. He will not provide them with health care if they become ill and need help. They need to remember how Steve treated the Veterans. Once you have fulfilled your use to Steve, you are disposable.