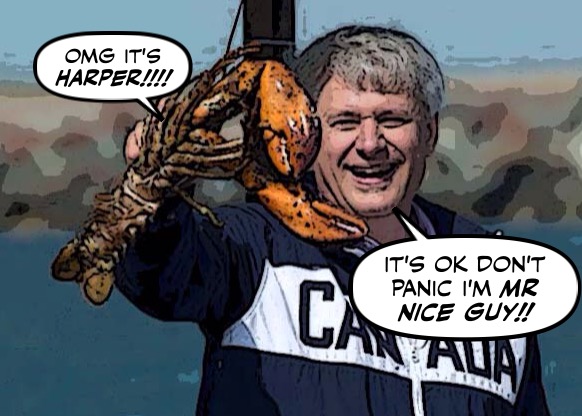 Well there was Stephen Harper yesterday, trying to show he's really a nice guy, by releasing a lobster over the side of a fishing boat.

But of course for the real story of that photo-op, you'd have to read this account of that media nightmare.

To understand that in Harperland nothing is what it seems to be.

And that his phoney Mr Nice Guy act didn't last long either.

Because now he's back to peddling the politics of fear. 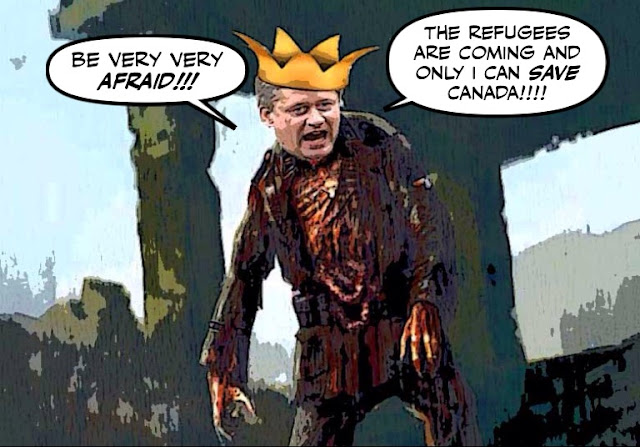 Canadian Prime Minister Stephen Harper, stung by criticism over his government's slow response to the Syrian refugee crisis, shifted the focus of his re-election campaign to national security on Friday, a move analysts said brings the politics of fear to a deadlocked race.

Harper shuffled his campaign staff this week and began repeating the message that his nine-year-old government is best placed to protect Canadians from global threats. "When Canadians stand together against ISIS, we stand in support of Canadian values and in defense of our way of life," Harper tweeted on Friday.

As one might expect now that the Aussie attack monkey Lynton Crosby is managing his campaign... 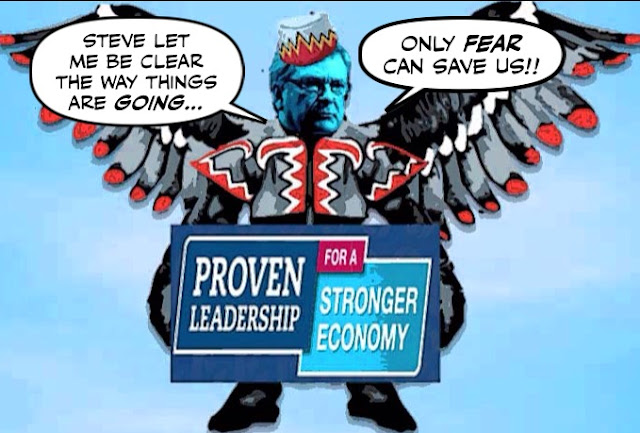 And trying to turn helpless refugees into deadly enemies.

And the most frightened person in Canada must be Stephen Harper himself.

For his campaign is literally falling apart... 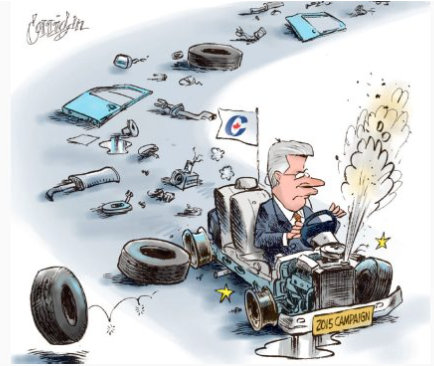 His decision to start it more than a month ago, instead of yesterday, couldn't have been more disastrous.

He’s been beat up over the Mike Duffy trial, hit with a recession declaration, haunted by lousy candidates, blindsided by Syrian refugee empathy and, as a result, is now scrambling to enact damage control in a war room apparently left without adult supervision.

And while he shows remarkable personal energy at the rallies, Harper has also endured about 180 questions from pesky reporters so far on tour, a daily inquisition he’s faced with the same grim look one would see on a patient at the snap of a rubber glove in a doctor’s office. 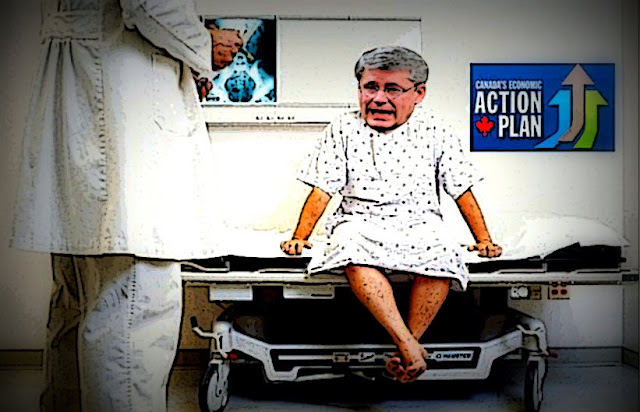 He must be hurting all over, and it's an open question whether his once mighty War Room is going to make it to the end of the campaign.

Which can only make him look even less like a political genius, and even more like an idiot or a loser.

If Harper’s campaign manager and chief of staff were kicked off the plane for advocating this trouble-plagued early election call, they clearly deserve the doghouse treatment.

But it’s more likely Harper made the call. If time continues to work against this campaign until the Conservatives lose power, then the defeat rests solely on his shoulders.

And as for his mighty air war that was supposed to destroy his opponents.

Or crush them under the wheels of his bus... 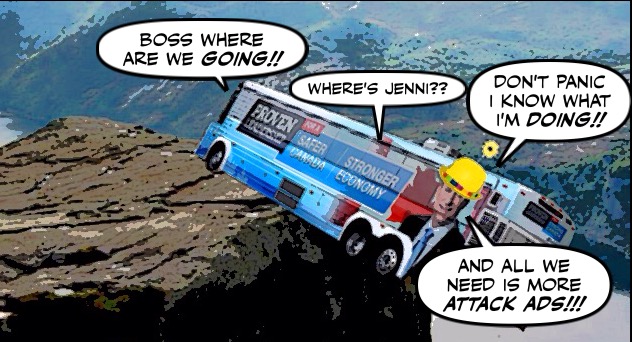 Well it isn't going anywhere either, and his ghastly attack ads are now being parodied by his opponents...

And if all of that wasn't bad enough, his attempt to relaunch his campaign is going to be made even more difficult by the impending trial of Bruce Carson.

As the Conservatives try to turn the page on a rocky first half of their election campaign, the beginning of a criminal trial for a former Harper staffer threatens to bog down this relaunch.

Bruce Carson, a former senior adviser to Stephen Harper, faces a charge of influence peddling and three counts of illegal lobbying. His influence peddling trial starts on Monday in Ottawa, while the other charges will be dealt with in a separate trial next spring.

Which can only do him even more damage, and make him look even more corrupt.

And explains why he is desperately trying to change the subject, and scare Canadians again.

And why he must be so scared himself... 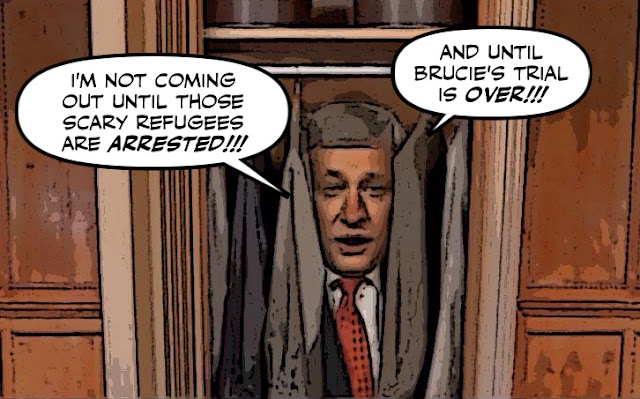 For there never was a more cowardly leader.

And one who would use fear as a weapon against his own people does not deserve to remain in office.

Of course we need to keep up the pressure, for there are still 37 days left before the election, and he is now so desperate he is capable of anything.

And in the next couple of days I'll have some suggestions about how we can do that.

But for now I'll just say that the universe is unfolding even better than I had hoped... 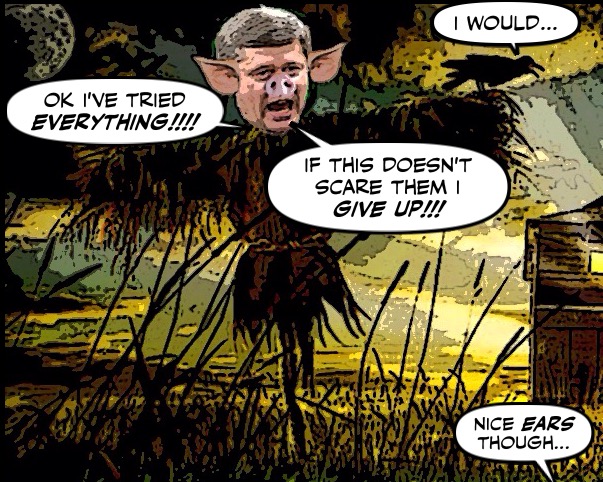 The monster is indeed destroying himself.

And our long nightmare could soon be over...

While we wait to see what the Carson trial may reveal,the other one,that Duffy trial needs to hear from one Dave Penner.
The Director of Appointments in the PMO at the time of Mike Duffy’s appointment in December, 2008, was Dave Penner, who left two years later to become Director of Human Resources at Canada Post.

Without question, Mr Penner acting in his role as Director of Appointments, would have had direct discussions with Prime Minister Harper about the Duffy Senate appointment.

Did Penner raise the residency issue with Harper?

What did the prime minister know about the questionable eligibility of Duffy?

If you examine the witness list for the current trial proceedings, you will note that Dave Penner is not on that list.
So if the crown won't call him Duffy's lawyer should.This is an interesting story finally from David Rankin a policy adviser in Ottawa during the time Duffy was appointed and sheds light on what happened during a meeting he attended at that time.

Well, when even Wente says his time is up...

Spot of good news, though. Jeremy Corbyn elected as leader of Labour Party!

Anonymous said...
This comment has been removed by a blog administrator.
1:27 AM

hi anon...I'm sorry to delete your comment, but I'm going to have to insist that commenters restrict themselves to the subject of my posts. I have very little time as it is to write these posts and answer your comments. I always try to do that but I can't answer rambling statements that are all over the map. Thanks for your consideration.

hi anon...yes that was an interesting article, and it is stunning to read how Stephen Harper treats others behind close doors. But unfortunately the Duffy trial won't resume until November, so we just have to hope that the stench remains in the air to remind Canadians why we really change...

hi lagatta...yes I was happy to see that Corbyn won, and I was going to write something about it. But I'm just too tired. And I'd hate to point out that in Britain the Labour Party and the Scottish National Party are tacking left, while in this country the NDP is tacking right. They may need to do that to win votes in this country. But when I see how the young support both Corbyn and the SNP I am more than ever convinced that the future must and will be LEFT...

hi jolly roger...yes I ran that ad the other day along with another one you really must see. Because they are both devastating, and it only shows how much better our social media and video makers compared to the Cons. It gives me hope for the future...