Are the Harper Con Artists Faking Their Propaganda? 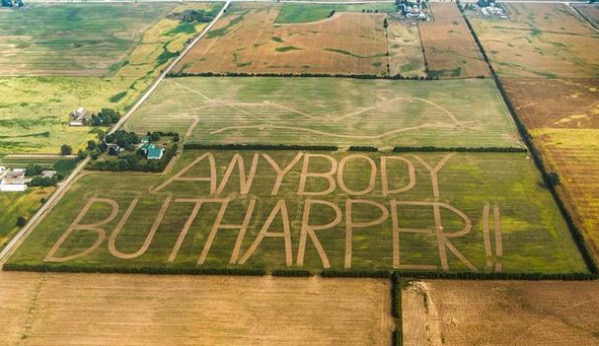 I'm sure many of you have seen this great sign carved into a field in Buford, Ontario, by a good Canadian to make it absolutely clear what he thinks of Stephen Harper.

“I think it’s time he left, I think he’s been bad for Canada,” Langs said.

So I wasn't surprised to see that the Cons had claimed to match it with this sign allegedly carved into a fallow field in Alberta.

But as with all things Con, almost nothing is what it seems.

For while their supporters went wild, and spread it all over the Conosphere with the help of the head of the Blogging Tories Stephen Taylor... 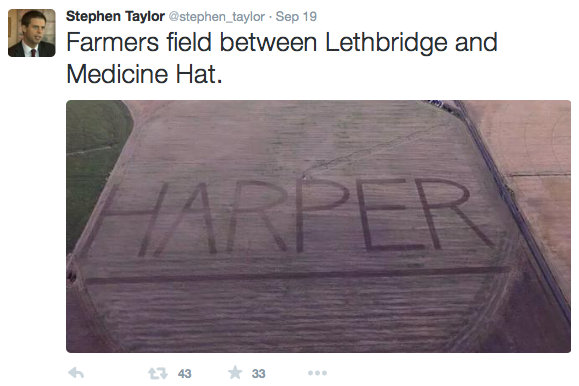 The big question was whether it was real or whether was  fraud.

For when you take a closer look at that picture one could only wonder... 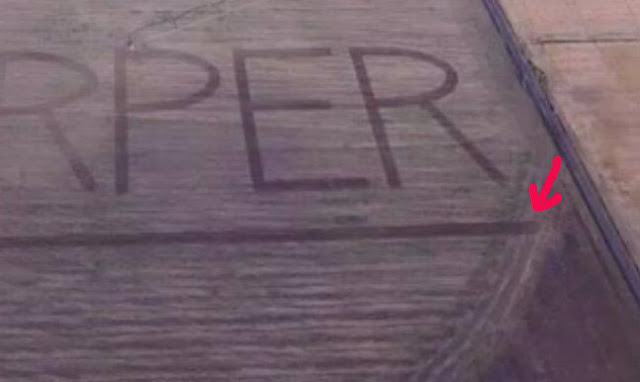 And sadly the person who posted that picture is no longer available to answer questions...

Which did seem a bit suspicious.

And of course this couldn't be more hilarious...

Because we progressives assume exactly the opposite.

If it comes from a Con it's almost certainly a lie... 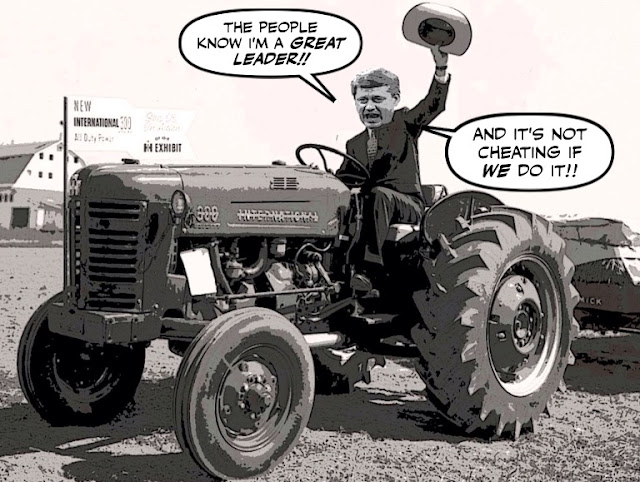 But now it turns out it wasn't Steve it was Bill.

A farmer in Cranford, Alberta, says he was inspired to create his own a message of support for Conservative leader Stephen Harper when he saw a picture of an “ANYBODY BUT HARPER” message plowed into a field in Ontario.

There are still people in this country who think Harper is a great Prime Minister.

One of their campaign buses broke down today, started belching smoke, and had to be hastily evacuated... 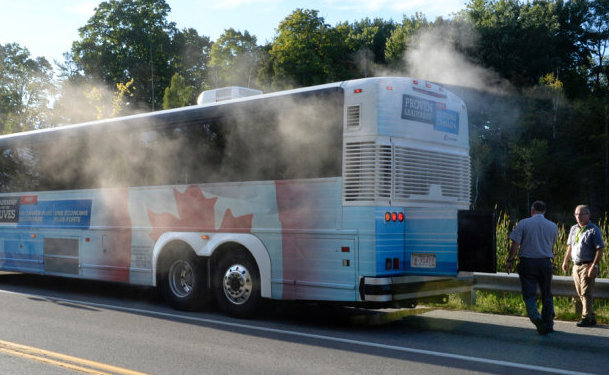 Which hopefully is a good omen.

And this is still true.

As long as this ghastly Con artist is in power the truth will exist in a twilight zone. With nobody able to be sure whether anything is true or not.

And the truth will not be safe until he is defeated. 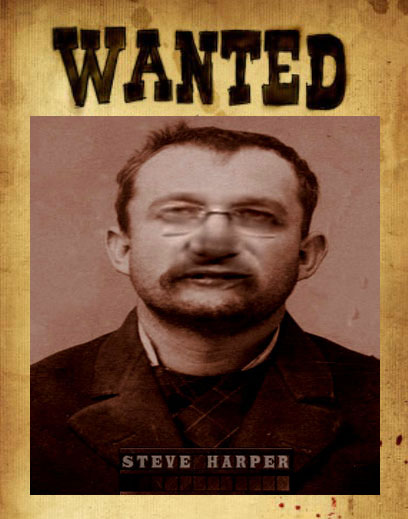 It seems that's not all they faked. The terry Fox family is displeased by the reformatory lie about their support of a tory bribe. Harper doesn't care who he hurts.

These reform-a-cons faked a citizenship ceremony.michele remple is on Power and Politics every evening faking intelligence.They have used faked stock pictures in their ads.Why not a farmers field?FAKE FAKE FAKE FAKE.
And now the low lifes have used the heroic Terry Fox, a young man who united this country more than any other person in my lifetime to try and get votes.
harper and his tribe are doing the complete opposite of what Fox did.Disgusting.

Watching the Harperites is like watching third rate magicians. They really should study the masters, but I doubt that would help them. Producing good fakes is simply beyond their capacity.

Someone good at making images should design a crop circle photo of the Con logo and try to pass it off as coming from a Con supporter who took it after he went out into his field.

hi rumleyfips...yes I saw that story and the Cons really our shameless. They would politicize everything and we can't get rid of them soon enough...

hi anon...yes Terry Fox is one of my greatest heroes, I've travelled all the way to the place near Thunder Bay where he was forced to give up his run. And Harper and his gang are not fit to stand in his shadow...

hi anon...thanks for that clip. What a fascinating story. Clifford Irving is our Stephen Harper, claiming he wrote a book on hockey, when everybody else knows it was written by others. Him and his Con clowns aren't even good fakers, they're just too obvious....

hi anon....now we're talking, a Con crop circle and even MORE evidence that they must have come from outer space... ;)