Jack Layton and the Gun Registry 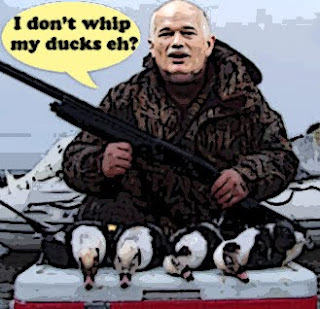 Golly. Tell me it's a nightmare. Could that really be Jack Layton preparing to shoot down the gun registry?

Just because he won't whip line up the ducks in his caucus.

His refusal to whip his caucus, as Michael Ignatieff  has done with the Liberals, virtually assures the motion will fail and Bill C-391, which was introduced by Tory MP Candice Hoeppner to end the long-gun registry, will succeed.

Because if the excuse is that Bill C-391 is a Private Member's Bill, excuse me while I pick up my humble pea shooter, and shoot that one full of holes.

(1) The bill to kill the gun registry is not a Private Member's Bill. It's a government bill, whipped by the Cons, and if they can whip their caucus so can you Jack.

(2) Even if it was a PMB, killing the registry could kill Canadians, so there is only one RIGHT way to vote. If it was a bill about human rights would you whip your caucus? Of course you would. Well this one's about human lives so you know what to do.

(3) If this compromise you suggest is any good, then it should be good enough for your caucus. And you should tell them to support the registry or stay at home.

(4) You know why Stephen Harper wants to kill the registry, even though it's effective.

“Instead of driving for solutions, he has used the issue to drive wedges between Canadians. Instead of reaching out, his party is running radio ads vilifying urban registry supporters as the enemy. They’re stoking resentment as a fundraising tool to fill their election war chest.”

So why would you cave in the face of that kind of pressure? Let them threaten the lives of police officers, paramedics, and ordinary citizens. And let them turn our country into Amerika.

NDP LEADER JACK LAYTON SAID MONDAY HE’S NOT WORRIED ABOUT THE BACKLASH THAT MAY COME FROM HIS PARTY HELPING KILL THE LONG GUN REGISTRY.

“YOU CAN’T GO THROUGH LIFE IN POLITICS WORRYING ABOUT WHO IS GOING TO BLAME YOU FOR VOTING ONE WAY OR ANOTHER ON AN ISSUE,” LAYTON TOLD A NEWS CONFERENCE.

Because if the gun registry is killed there will be the biggest backlash this country has ever seen. The Cons and their goomba stooges will feel our righteous wrath the most. But although you are a decent man you will also feel it, for burying the NDP as a party of principle.

So do the right thing Jack. I know you can.

Because as this nurse says it's all about saving lives.

And whatever the gun nutters, or those too lazy, ignorant ,or paranoid to fill out a form say.

It's all about the women...

You see Jack, I just can't forget them, or the kind of less violent Canada their loved ones tried to build by working for a gun registry.

Some things are more important than just politics.

Perhaps I'm cynical or just blogging too much but I am beginning to think the whole political process in Canada on the left is one of submission. There are no leaders left to fight for us. I don't know how yet but we must learn to fight for ourselves to defeat Harper. There is no one in government circles to help us. We are on our own. Let's rock.

hi Jymn..Well you do a blog a lot. :)
But if you're feeling a bit cynical I don't blame you. These ARE the worst of times. I can hardly blog about politics myself. I'm going to have to take a break. I can't believe that we have to defend something like a gun registry, just because some people are too lazy or dumb to fill out a form. I can't believe I have to criticize Jack who I like. But we're wallowing in our own shite in this country, thanks to the Harperites, and you have to stand up for what is right.
As for what we do about it...I agree we need to rock. When the next election campaign begins we have to get out there like we never have before, and work to get progressive MPs elected. Right now I'm too exhausted to do anything but lie in a hammock and fan myself. But come election time I'll be ready... :)

easy there Simon calm down take a deep breath.
First off I am no fan of the Conservatives indeed I consider myself of the left.
Please explain to me how the long-gun registry will save one single life or how it might have prevented the tragedy in Montreal. And further more to be against this registry does not mean one is a "nut bar gun lover".
Jack is doing the right thing by not whipping his MP's,its called democracy, is called respect for one constituents. That said If the voters in those NDP riding disprove they can vote accordingly next election.
Gawd what is it about this registry that drives some people crazy. Could it be because the Conservatives are behind,is it just partisan politics I think so. Because logically your rant makes no sense

hi Skinny Dipper... you know some people think I'm kidding when I say that. But I've seen the results of gun violence, I've too many friends to lose so I don't care...

hi Dirk...I assure you I am calm, I even know how to control my pulse, like a marksman does before he fires a gun. ;)
I think just about everything I write is a rant, but that's the nature of the blogosphere isn't it?
I also want you to know that I have quite a few gun lover friends, and most of them are as rational as you appear to be.
However, you must understand that the issue of gun control is not one where I can easily separate logic and emotion. Nor do I wish to. The reason I mention the Montreal Massacre is because Bill C-68 came out of it thanks in large part to the families and friends of the murdered women. The registry was part of it, and I don't want to see gun control in this country dismantled piece by piece.
As to your claim that the bill to kill the registry is a PMB, I beg to differ. Firstly there are reports some urban Cons are whispering about being whipped. And secondly, I don't believe debating something that affects the safety
of other Canadians should be a free vote. If I felt that rural folk or reasonable gun lovers were truly being trod on, I might reconsider my position. But filling out a form isn't a huge problem. And believing that it is comes from across the border, along with the delusion that Big Government is trying to take away their guns.
So you see we do agree on something.
Re-opening this debate is absolutely CRAZY... :)

MS wrote..."I don't believe debating something that affects the safety
of other Canadians should be a free vote"...

Yeah so I see... god forbid we respect and trust constituents to actually know what's in their own best interest ?
And again you have yet to explain how this gun registry will make Canada safer, less violent,or prevent another incident like Montreal etc etc.
Further more, gun owner already fill out a firearms acquisition form and are also obliged to take a safety course while waiting for approval(2-6 weeks) once the police check their records ( for violence)said person can and only then buy a rifle shotgun etc.
This registry is nothing more than a political stunt playing on people's emotions (after all the whole exercise is related to the Montreal tragedy). Indeed the vast vast majority of gun owners are law abiding and are definitly not gun-nutters. Enough already with the, state knows best nonsense. God save us all from the do-gooders who predictable and with out fail, propose one law after another every time something bad happens.
Personally I do believe if the police & authorities had it their way we would all be carrying internal passports.
This registry is part and parcel of that kinds of thinking.
The police pretty much admit as much-the registry is about them and their ability to monitor guns and their owners.Its not about the public's safety,hence the impressionability of locating an argument explaining just how the registry would prevent crime or god forbid,another massacre of innocence.