The Media to Jody and Jane: Stop Playing Games 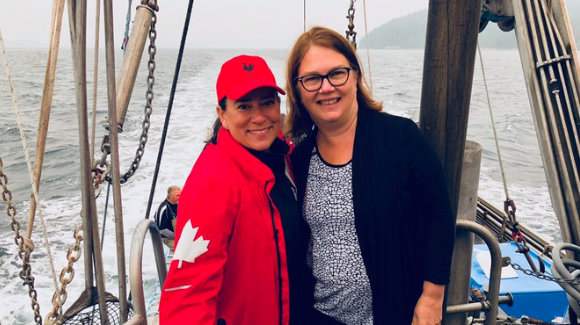 In the seven weeks since the fake scandal erupted, the MSM's chosen role has been to act as its giddy cheerleaders.

But now some are starting to notice that Jody Wilson-Rabould and Jane Philpott seem to be playing some kind of weird game.

And like most Canadians some are starting to say enough is enough. 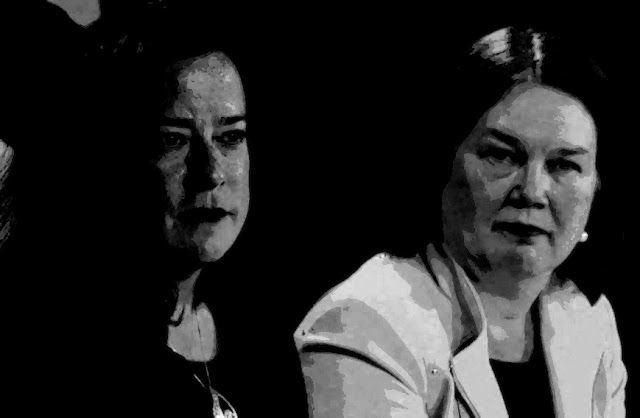 So here is Susan Delacourt telling the dynamic duo to stop playing hide-and-seek.

These two ex-ministers keep telling us they have more to say. So let’s have it. If the truth is this urgent and all-consuming, worth putting every other issue on hold, why does it keep hiding behind some obscure, debatable rules?

That’s what speaking truth to power looks like. It doesn’t dance behind anonymous leaks, cryptic interviews or polite, “No I couldn’t possibly break the rules” evasion. It doesn’t issue vague statements and then shrink from interviews and hard questions, including sharp ones from their caucus colleagues.

What would happen if they convened a news conference and told the whole story? Do they think they would be led away in handcuffs?

And here is CTV's Joyce Napier suggesting it's time to stop playing games.

I'm sure we'll soon find out why the dynamic duo were playing this game.

But the high school slumber party is over.

And it's time to put the fake scandal to bed...

Are they fucking or just ratfucking? Maybe Warren is more like Roger Stone than we thought. Either way JWR needs to shit or get off the Philpott. I don't care if that sounds crude, I hate their guts and wish they'd go away. But not without a very contrite public apology for what their explosive mean-girl tantrum has already done. Still looking forward to Justin's book about all this, though. Bill Clinton's was called "My Life." Maybe Justin should just call his "My Truth."

It is doubtful Trudeau is going anywhere. At worst I see him with a minority government. He, like his Father doesn't walk away.

There is no need to hate JWR or JP. Its an emotion which produces little beyond a fractured society as they have in the U.S.A. There will be no apology. Apologies are worthless. You want action or money.

Kinsella is not a "ratfucker" as defined. He just isn't in the league of Atwater, Stone and Manafort. Kinsella, while young, was there at the right time for the right job. those days are gone. He really is a spent force in Liberal politics. Why do you think he has his band and blog?

We don't really know what went on so all of us are better off to leave it alone. Its not wise to burn bridges, you may some day have to get back to the other side.

Poor Jody, a lawyer by profession with experience as a crown prosecutor unable to issue an unambiguous "Cease and Desist" letter in the SNC affair. Anyone that believes that probably already owns some prime Florida swampland, a share in the Brooklyn bridge venture and is saving up to sponsor the travel costs of a Russian bride.
Nope,it now seems that she thought a few SNC innuendos would protect her role as justice minister and allow her to get on with her agenda until after the next election at which time she would be in a solid position to bring the house down when the inevitable shuffle out of the justice minister portfolio happened. Unexpectedly fate moved the shuffle up by 9 to 12 months so its necessary to play the cards that were dealt. Visions of a new "truth and justice" political party anyone?
The following article is somewhat biased but does contain some nuggets.
https://www.c2cjournal.ca/2019/03/who-pressured-whom/

Thanks RT. There is an article by Conrad Black pointing out a lot of the same problems with JWR.

She does not want Trudeau's job. What she wants is a revolution, replacing the current "white" in her view system with a federation of national monarchies, ruling and collecting rent forever from the white tenants. Her "I made my decision, stop questioning it" attitude is just one example of her imperial view of herself as superior to others. Empress Jodi of the United First Nations.

Once they realized her goal, and how she freely interferes in the justice system to stop opposing her friends, they had to drum up this case to have an excuse to move her.

As usual, Trudeau is letting everyone underestimate him. I think he is schooling us all and in a very powerful way, reminding us why we kicked Harper out. Like Justin having a level of admiration for the Chinese dictatorship, I have a level of admiration for Harper's tight ship. Had he decided he wanted to help SNCL, the DPA would have been ordered by AG, the reasons published in the Gazette, and the helpful op-eds and explainers would be written "contributed to the Globe" about the rule of law guaranteeing government's twin roles as the sole writer of laws, and as guardian against judicial activism by unelected prosecutors. There would be no dissent heard and no defections. The opposition would be accused of treason for opposing the elected Ministers. I always admired how slick and well coordinated they were. But they also tried to dumb everyone down and shut off information.

While the process we are seeing is messy and embarrassing, with negotiating, actual back and forth discussion, debate and jaw jaw, it is far preferable to the previous top down approach and extreme pervasive secrecy. We are already getting stronger for it, more literate in how the sausage making is actually done. Instead of treating us like children who should be seen and not heard and not shown too much, we are being treated as adults, allowed to see how it really is.

So glad Chantal Hebert is also speaking out, in the Star and on At Issue panel, that Philpott and JWR are "gunning" for PMJT and throwing her supposedly esteemed colleagues under the bus -- Kady O'Malley is tweeting questions too.

Stop playing games indeed. Just when the fake scandal is dying down in the news, one of the toxic twins conveniently throws another bone to the media to revive the dead horse. They are a virus much like herpes. Just when you think it's gone, another cold sore rears its ugly head. Cold and sore. that's the toxic twins.
They are clearly trying to inflict maximum damage to JT and the Liberal brand because as those pictures of the bffs shows, Jane is very protective of her little Jody. You mess with Jody, you mess with me. Oh, and their other sudden bffs of convenience, Kinsella and Raitt or as I like to call them, "Coach". What a lovely, twisted foursome they make. Consorting and conspiring, over a well deserved firing.
What galls me the most about J&J is that in spite of the relentless attacks against him, Justin Trudeau brought the Liberal party back from the abyss and soundly defeated the biggest threat this country has ever faced, Stephen Harper. He didn't have to do this, he felt he needed to and he did it. For that he deserves our eternal gratitude and full support to defeat an even worse threat against this country, Aryan Andrew Scheer.
Enough of the games in your slow motion vendetta against JT, mean-girls. No more hide and seek. No more peek-a-boo! We have an election to win so it's time to either put up, or kindly STFU.
JD

I have no cats in the fight, but anon 12:28 is referring to the former Peer's decidedly anti-Indigenous slant. It is not setting up mini-monarchies to remind us that Canada, like all settler-colonial States, owed a great debt to the Indigenous nations.

Looks like Delacourt struck a sensitive nerve with ol' wornout. A reaction that over the top makes me suspicious .No puppet, no puppet, you're the puppet.

Yes, and something we have never repaid.

If JWR believes the time is now to bring the Indigenous people into the game, then good for her. We may not like how she is doing it but it is about time. We all look to the U.S.A. and point when we see reports of African Americans being shot, arrested, etc. for being black, well in Canada we have the same thing, except its for being Indigenous. How long do you want to wait? For of you who think, oh, we're not as racist as the Americans, you haven't been out of your neighbourhood for some time or you don't want to hear it. Just have a look at the death rate for young Indigenous kids and how some police forces have treated it, like nothing happened.

JWR isn't interested in setting herself up as anything. If you understood Indigenous culture you'd know they never did have a European style culture of goverance.

As to us paying rent or some such thing in perpetuity, sounds fine to me. We still have never paid the rent that we owe on this land. Indian Affairs for a century or more has "fucked' over the Indigenous people, doing the bidding of white corporations to the disadvantage of the Indigenous. When I moved to my current home, I wondered aloud why the Reserve was not one large mass. Response, the lumber companies wanted the land, so the Reseve was cut up and given other land, separate from the original pieces of land. Well guess what is the most expensive land and has the most potenital today. Upp, the land "stolen" from the Indigenous people. In the meantime the Indigenous people in the area have a reserve which is cut up into pieces making it hard to even get to one area to another if you don't have a car.

This reminds me of Beds are burning, a popular song as we were marching for Indigenous rights in the Oka Crisis: https://www.youtube.com/watch?v=ejorQVy3m8E Though obviously that remains fare more complicated in all settler-colonial states.

As if to remind me the media's bias here, when I wake up to the morning news radio, SNC-Lavalin is always the *first* story being talked about. There's so much critical stuff going on at the federal level alone (to say nothing about the Ford government), and it's always that stupid nothingburger of a story.

It was nice to see that The Star ran a whole page of letters on Saturday agreeing with Simon in that the steady "drip-drip-drip" teasing of JWR and Philpott is absolute nonsense and they were having none of it.

Like I said, the coverage is so obsessive you'd think Justin kept a private email server in the basement of SNC-Lavalin HQ. Perhaps they handled the sale of Uranium One to Russia and are housing a pizza restaurant there that acts as a front for child sex trafficking. We won't know for certain unless Jody and Jane leak "their truth" to Julian Assange, and Justin gets called to testify for 18 hours about putting pressure on Ben Ghazi.

The hacks in the Con media sure learned from (or are getting instructions from) their American counterparts (or paymasters) very, very well.