How The Filibustering Cons Ended Up Looking Like Idiots 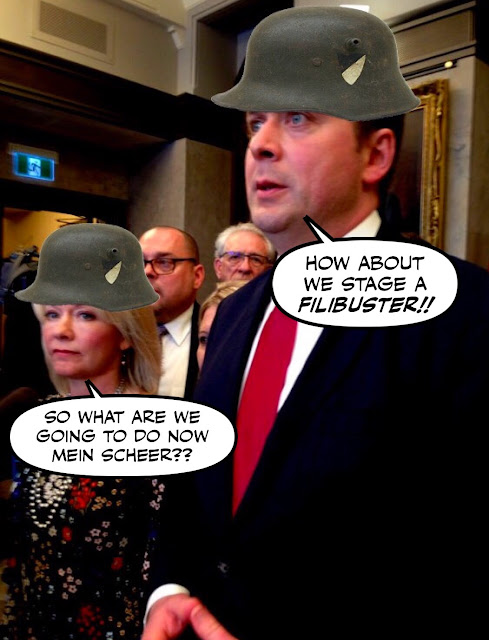 As you know Andrew Scheer is desperate to try to keep the fake scandal going, to try to make Canadians forget that he has been exposed as a far-right extremist.

So he came up with the idea of a filibuster to try to force the Liberals to allow Jody Wilson-Raybould to tell the justice committee even more of "her truth." *Groan.*

With the absurd slogan "let her speak and we will let you sleep."

But unfortunately for Scheer and his Cons, the filibuster is backfiring badly, and making them look even more unfit to ever form a government. 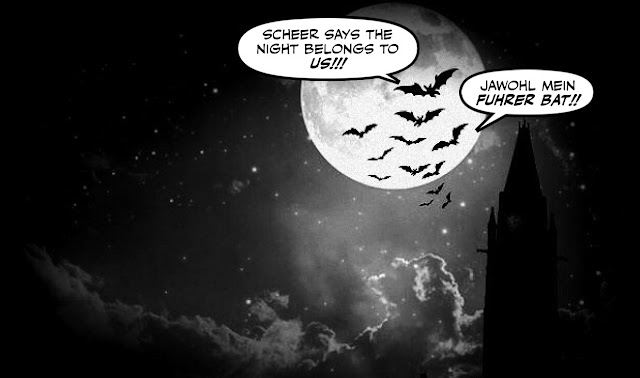 For while they have kept the lights in the House of Commons burning all night.

The House of Commons is engaged in a marathon voting session that will force MPs to stock up on stamina (and caffeine) to get through.

Shouts of "Yay" and "Nay" were still being heard around 3:30 a.m. ET, as the motions kept coming. The sheer volume could keep MPs voting for the next 48 hours.

Their plan to vote to defund  hundreds of government departments has made them look like idiots.

By giving the Liberals a handy slogan: 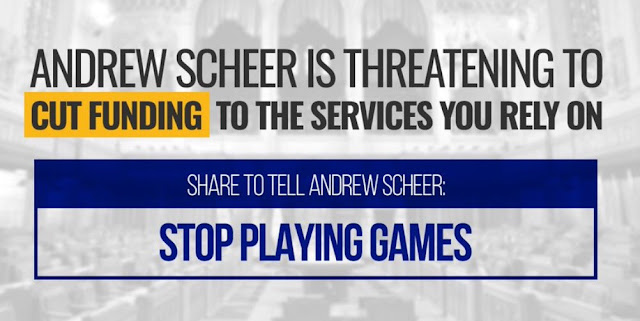 And allowing them to have some fun at their expense of the batty Cons, like Chris Bittle does here.

Marathon vote update #5 - the Conservatives voted to defund Veteran’s Affairs $323 million - quite the commitment to those who have served our country #cdnpoli pic.twitter.com/aH10tEibco
— Chris Bittle (@Chris_Bittle) March 21, 2019

And with the excellent Stephen Fuhr keeping a running count.


I was also able to get in on the action.

By among other things, making a monkey out of the grotesque Pierre Poilievre.

Actually the joke is on you Skippy. Your little stunt is not only a meaningless assault on our democracy. At an estimated $50,000 an hour to keep the Commons running all night, the total cost to taxpayers could be at least $2 million dollars. #cdnpoli https://t.co/r2y0vVI4Qx
— 🇨🇦 Simon 🏴󠁧󠁢󠁳󠁣󠁴󠁿🍀 (@montrealsimon) March 21, 2019

By accusing him of fiscal irresponsibility, and adding to the deficit the Cons are always complaining about.

As well as sticking a fork into the side of this grotesque video from the porky Candice Bergen.

On a night when the filibustering Cons voted against funding the Department for Women and Gender Equality, the House Leader of the Misogyny Party wants you to know that Justin Trudeau is a fake feminist. https://t.co/UVZmHtww1w via @YouTube
— 🇨🇦 Simon 🏴󠁧󠁢󠁳󠁣󠁴󠁿🍀 (@montrealsimon) March 21, 2019


Which no doubt had her squealing with indignation.

But had me rolling on the floor laughing.

And the best part?

The Liberals are going to be able to go all over the country telling Canadians that the Cons tried to kill the programs they are now enjoying.

Like the one that keeps us safe from terrorists, or the one that provides granny with a wheelchair she otherwise could not afford.

But that luckily the Liberals were able to save them, which should mean lots of grateful voters.

Poor Cons, no matter how hard they try.

They're not smart enough to govern. They're just too dumb. 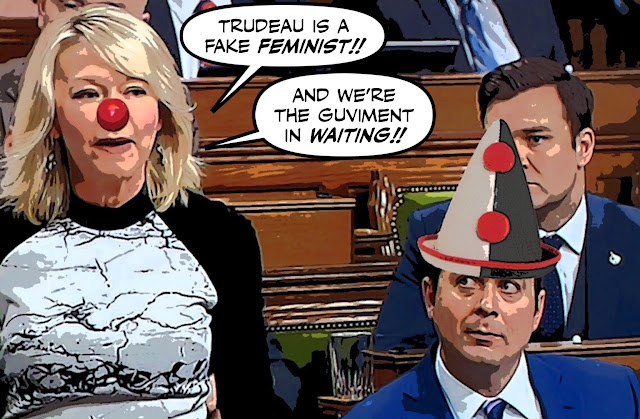 Any thoughts on Jane Philpott and her interview with Paul Wells/Macleans? Interesting choice of journo to do some more whining. The timing seems suspect and there can be no doubt this is being orchestrated behind the scenes. JWR and JP are daring Trudeau to expel them from caucus because they don't have the guts to do it themselves. Time to woman up ladies and get the hell out of the party. These two whiners are beyond tiresome. Now the media is reporting third hand hearsay. CBC is giving it wall to wall coverage. It's time to stop funding the CBC to the tune of $1B a year. It's a colossal waste of money.

Scheer volume indeed. A tale told by an idiot, full of sound and fury, signifying nothing. I thought Dudley Do-Wrong wanted the Mounties to arrest Justin? Now he wants them all fired? When does he get around to channeling his inner Ted Cruz and reading Green Eggs and Ham?

Simon, did you see JD's link to the Dale Smith article from yesterday about the hate crimes motion? Obviously their little hissy fit wasn't about "justice and the rule of law" at all. It was about stopping the Liberals from publicly announcing they were going to expose them for the Nazi sympathizers they are. And protecting Herr Harper. I was hoping someone would bring up Section 13 of the Human Rights Act, and lo and behold they did. A flicker of hope after a very dark winter.

The only thing that should be defunded is the salary and pension of every Con scumbag in this deplorable hate group masquerading as a political party. What a bunch of vindictive, spiteful crackpots they all are.

Oh, no. I had a flicker of hope. Now I'm back to being depressed. We're back to Hillary's Emails yet again. This has all the makings of a coup. Shaking and crying now. :(

Chantal Hébert says patience young Padawan, time heals all (or at least most) wounds, and "outrage fatigue" is shows signs of settling in. She says don't count out the underdog fighter yet; he's shown no signs of jumping the gun on an early election and is likely to take as much time as he can to rebuild and let the dust settle from now until October, especially with some big upheavals coming up in Quebec, Ontario and (of course) the inevitable chaos in Alberta.

Hugh Segal says there's only so much huffing and puffing about scandal that Scheer's big blustering wolves can do, time to shit or get off the pot and come up with a platform. He's also the latest to denounce the Cons' pandering to racist groups and other deplorables, so that's encouraging.

Again I say, their keyboards to Dog's ears.

This is an unprecedented back stabbing over nothing and its coming from 3 women.

Looks like "because it's 2015" is coming back to haunt the Liberals. Oh well, they made their bed...